Goatboy - Back from Feast 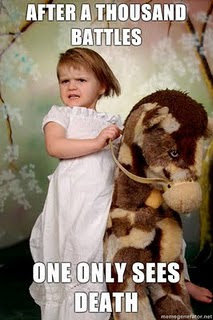 Sorry for the late update. I don't even have any painted models! Lord it has been kinda busy catching up. I should have a ton of stuff later on this week. Plus some art! I drew a bunch and plan on doing a much larger update with that as well as some bags. But before that - lets look at some list thoughts.

I got 3rd place at Feast losing out to a Daemons list. You might have seen it on the live game show for Feast. I failed a toughness test due to forgetting about Boon of Mutation from Fateweaver. It was to Kenny who is an awesome dude and a teammate from our winning ATC team. If I had to lose it was at least to him. Awesome player and just a great game. I stuck it out and "lost" to victory points after the primary to tertiary was tied. Woohoo! Still I kicked some butt and found the list to be pretty good eating through a Marine Army, Ork Army, Blood Angels, Space Wolves, IG, and Grey Knights. The list did really well and was a huge hammer for most opponents to deal with. In fact - I think the 10 Paladins is just a nice rock to hang your army on too. I think adding in the cheap troops with massed walls and firepower really helps it out.

Game 1 - Seeding round. Actual Battle points - Played a Vulkan list - Vulkan, 5 TH/SS termies, Crusader LR, Razorbacks, 2 Predators and some dudes. He set up for the Alpha strike and I just put Draigo hidden behind some hills. I came on and killed stuff. Paladins came on turn 4 with the +1 - but they came on and killed Vulken and friends. I had blown up the LRC with some inceptors that stayed still. Dakka Dakka. I won the Primary, tied the Secondary, and won the Tertiary. Woohoo!

Game 2 - Ghaz Orks - 2 Wagons, Ghaz, Meganobz, boyz in trukks, 1 batch of lootas, 1 set of Gretchin. Another Pitched Battle set up. I siezed the iniative like a jerk and killed Ghaz's Battlewagon with a glance. Great guy to play and I just go lucky blowing that up. One wagon lived almost the entire game through butt and side shots of my entire army. I immbolized 3 of my Razorbacks on the same terrain. Win for the Goat as Draigo ran across the entire board punching things like a boss with 1 wound left.

Game 3 - Blood Angels - Meph, Corbulo, some razorbacks, 3 Baals, Dante, and some dudes. Pitched Battle set up as I just put the blob there to ensure some beat downs. I sat in the middle and Meph came out. He charged me - he only had one attack from Psychotroke grenades and it went downhill from there. Dante did almost take out Draigo but Superman did his job punching out the Masked dudesmen. Win for the Goatboy.

Game 4 - Damien who built all the terrain for the event with Logan Space Wolves. I have chatted with Damien for a long time. I see him at events all over the place and his terrain he made for the con was awesome. This guy fixes minis and just loves this game. Mission had spearhead deployment and I just set up the Wing to walk around causing problems as is the norm. He had a LoganWing in front of me but he didn't come out to play (a good idea). We played and he stayed put in the back as I picked off pieces and won the game off of Kill Points. Nothing too crazy other then his inability to blow up my guys. I won this game too.

Game 5 - SirBiscuits roommate. First the missions were really good. I thought they had enough variety and I didn't feel any one mission was junk. So good Job on there. Yes I don't like W/L as I will say in one of my games - but as a whole the missions was good. Ted was playing IG and it was a Kill Points primary mission. Dawn of War and I set up with the power T for my paladins and started off waiting for the army to come on the board. I went first, moved back a bit and watched everything come in. I had put my Inceptors and 2 Razorback squads in reserve and they came in after he blazed on. Welp suffice to say I got ride of all 3 Vendettas (cover doesn't help versus massed firepower) and then just pulled back and to the other side of the table where his army wasn't set up. I picked off Chimeras and other bits with my long ranged firepower and won the Primary of Kill Points 7-0. Dropping the Vendettas shook Ted a bit and I knew that he would be playing catch up. If we had to win the majority of the Missions I would have pushed forward with my Paladins and gotten into the mix of things - punching people and doing what Paladins normally do - sometimes win games.

Game 6 - Versus Kenny and the Dream ends. It was Daemons, Crusher, Fateweaver and friends. I had an distinct advantage with Coteaz having Dark Exocommunication. I forgot Fateweaver had Boon of Mutation and I lost Coteaz when he jumped forward and gave him the bad touch. There isn't much else to say other then I lost on about an inch and a d6. Kenny was rolling hot a I poured 40 wounds in Fateweaver after his initial drop and didn't do a single wound. It was nuts I should have killed him and then had an unfun game with Kenny as the Paladins walked around punching Daemons in the dick. Still I stayed in it through nutty dice rolls and made Kenny beat me via Victory Points and not the missions. If one Paladin with the 2+ inv save had survived we would have almost tied as I was only down by like 400 points. Still awesome game and if I had to lose it was at least with my ATC boy Kenny or Nick (even though he knows my army is a foil for his).

Game 7 - CJ who I see all the time in other tournaments. Great guy with a Draigo wing list. He would combat squad his fat 10 man unit (a big no no as 5 guys are much easier to kill then 10). He had a custodias themed list with a Storm Raven, small batches of Purifiers, Libbie and friends. An all or nothing list. He forgot some stuff and just called it as we were both tired. I was about to punch out his Draigo and friends with a charge after dealing with the Libbie and assault Paladins without losing a bro. From there it was just a meat grinder.

So with W/L in mind I think I might have pulled out first with Battle Points. Nick had a lot of close games that would have hurt him while I had a lot of Massacres. The round with Kenny might have taken us both out as we tied down the line. Still it was a fun experiment and I think a tweak could make things much better. I like the all missions are of equal points that the ATC did. It makes it where some armies who really can't win one mission - knows they can push the other two for a "win".

The only changes I think I might do is tweak out some of the Henchmen and drop the Inceptors. Those guys almost died every game and I think I could figure out a better options that would give me the same sort of jump punch mixed with a bit more well - more. Here is my changed list.

I could drop the Dreadknight to get more troops or other options - but this is the thought design I think I will end up playing most of the time for Kick Ass games etc. It is mean, and lean. I am finding if you want to play a Paladin fat unit you need Draigo. The GKM is almost there - but being able to take a Lascannon on Draigo is extremely important.

Basically I make walls and try to shoot the crap out of you. I don't know if it will work - it really depends on how the Stalker looks and the size of it. I am still unsure of Necrons and think Scarabs are not nearly as neat as people want them to be. Of course I play Grey Knights who can shoot the piss out of them and auto blow up blobs of them. The Spyders are easy to kill too with only 3 wounds and easy to see and kill out. Still will see if 6th makes things better.

Lots to do and hopefully finish up this weekend. Pics are coming I swear!
Posted by Thomas aka Goatboy at 7:26 PM

I was your friend.

Then you lost to Daemons.

I mean I've only lost to Footdar and Orks. But Daemons?

Here's to losing when it counts *buys beer* =D.

Congrats on third man!!! Good showing, any chance on some quick bat reps?

Did you watch the video? It was one dice roll and then sad goatboy hahah. Plus I hate fate weaver hehe.

Daemons can be a great army. It happens. You made a strong comeback towards the end bro.

We have the video up on the blog, if anyone wants to watch it... Seriously though I don't often point a finger at dice, but Kenny was HOT for about 2.5 games. And when you have an outstanding player like that who is having a good day it is really tough to break through.