Been slow on the posting. I have been decompressing since Baltimore. You can read my post about it on Bells, I did pretty well (5th overall, 3rd Best General). I have some thoughts on changes to the list and other fun things, but I will save that for another post.

I've decided to start up some fantasy after the release of the rad Chaos Mortal knights. I always have a soft spot for Chaos, and this new book has some neat stuff in it. Will see if I can get out of the losers club and become a fantasy threat. Probably not, but hell you never know haha.

But yeah, the list is kinda dumb, but has the things I want to paint in it so who cares right? Here is my first painted unit, the warhammer Giant. Let me tell you, this model is fucking bad ass. But enough of that, onto the painting. 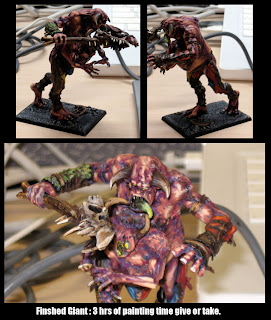 The next thing I painted, is a squad of Chaos Warriors because they look bad ass. 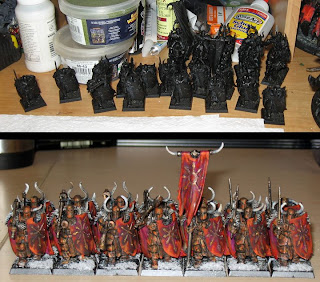 Next up is another squad of warriors, 2 nurgle sorcerers (Gonna convert from warriors), a block of Knights and maybe a war shrine (based off the corpse cart and some other horse bits). That will get me up to 2250 and will see what the hell I do from there. Most likely another War Shrine and other fun bits.

But yeah, I will post again during the week with an Ork list that might be fun, mix the bikerz with some great shootie bits to help take out the lovely walls of light vehicles that can put a damper on your day. And besides that a new list I dub the Ork Bullet. It probably won't win, but it will sure as hell be fun heh.
Posted by Thomas aka Goatboy at 3:12 PM 1 comment: