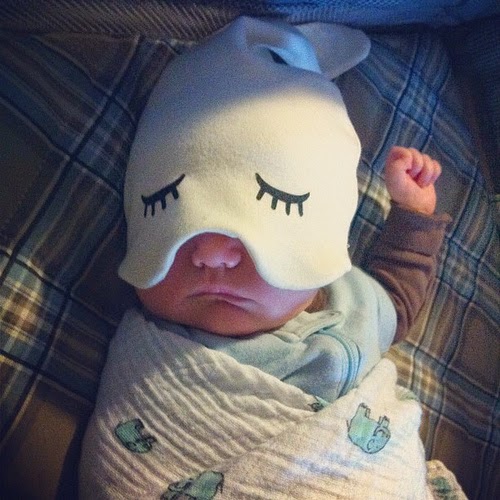 Work has been busy lately.  It's draining but worthwhile.  So it makes it hard to find time to blog.  I still paint a ton - but just finding time to get away upstairs on the computer is just... it takes a bit haha.  Usually it is when I have art to do.  Which is the case for tonight.  Woohoo!

Got a new army I am quickly working up and then I can start on Crons or Orks.  Ork list is pretty solidly designed as I just want to use as Stompa and somehow make it work.  The Cron list is fluid right now - with just me finding extra money to buy Tomb Blades whenever they come into stock.  The new list though - all the pieces are here and I am just working on getting it together.  You will see the models down below.

The list is currently a Dark Angels CAD with the Space Wolf Elite Detachment thingie.  The plan is to come at you hard and take as many names as I can. As I test it I will post the list up - but for now I just want to get it painted so I can play it at some local events.

Me
BOLS Article - new stuff might discuss said Admech like thingies
Servo Skull for Tournament Art
Banner for painting service - maybe done just sent it off it is why I am up late
Buddies Avatars of Chaos Art
Biker Squad # 1 - Done
Chaplain - Done
Libbie - Done
Biker Squad # 2 - 5 Dudes
2 More Iron Priests - one is built the other isn't
Repurposes some Doggies for said priests - one is done need to get the other 4 done.
Scout Squad # 1 - 2 out of 5 done
Scout Squad # 2 - just a dream

I might be missing other things but I am sleepy.

Hope to get a play test game this weekend with said list.  Then I can talk about it more.  Oh I need to study for a work test thing too.  Fun times for the Goat!

Let's do some models and then I can go to bed. 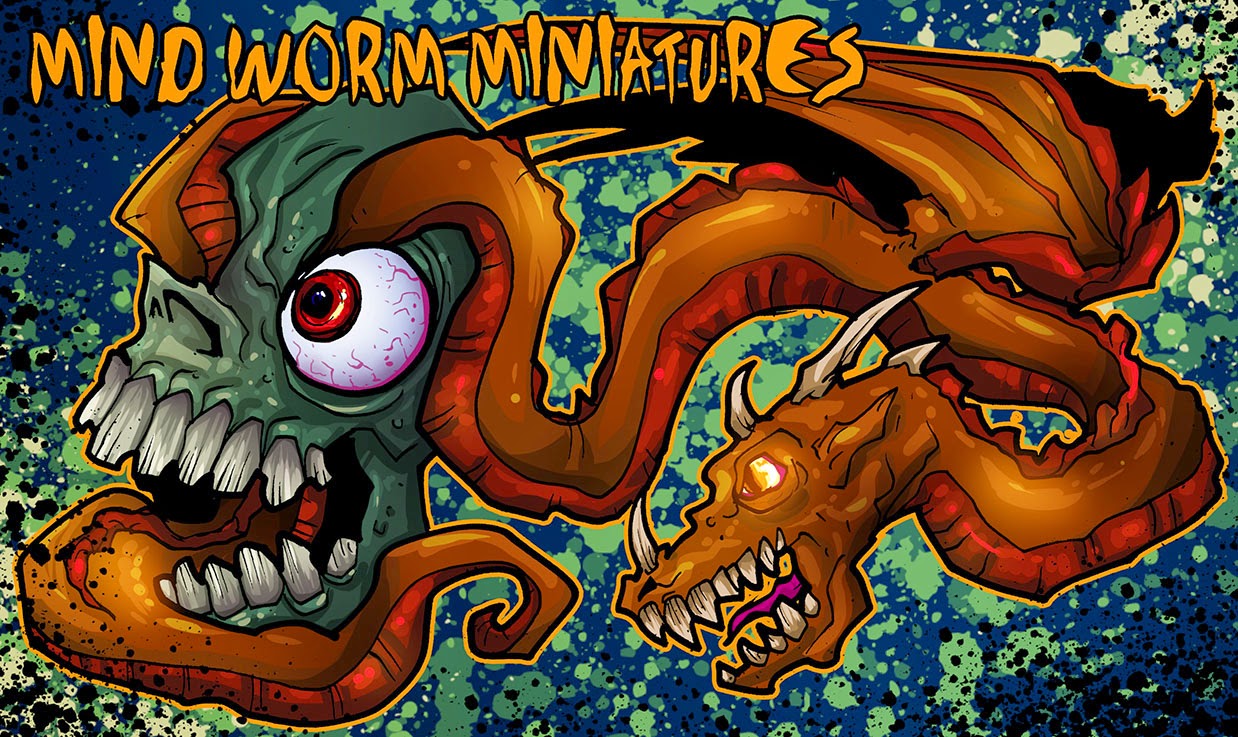 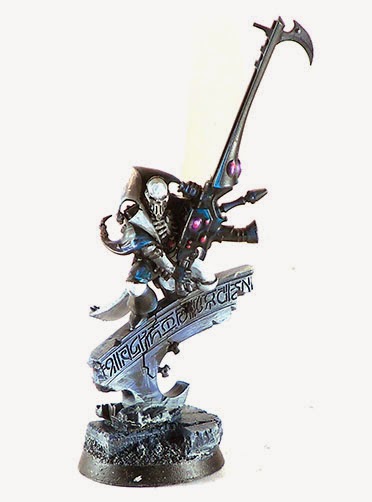 Just wanted to paint one and not buy one.

Made from extra nurslings! 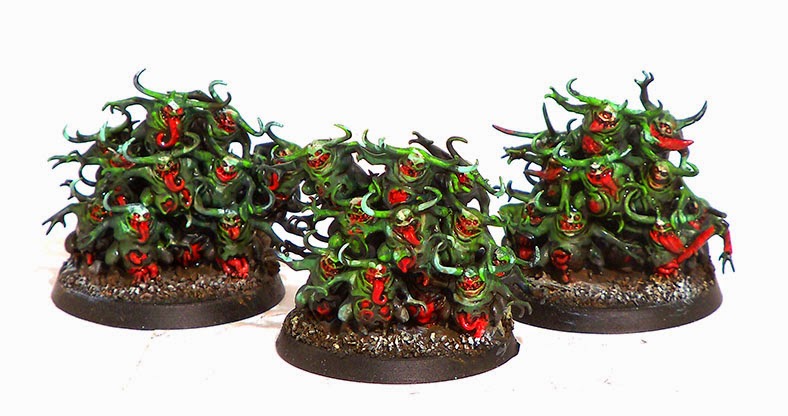 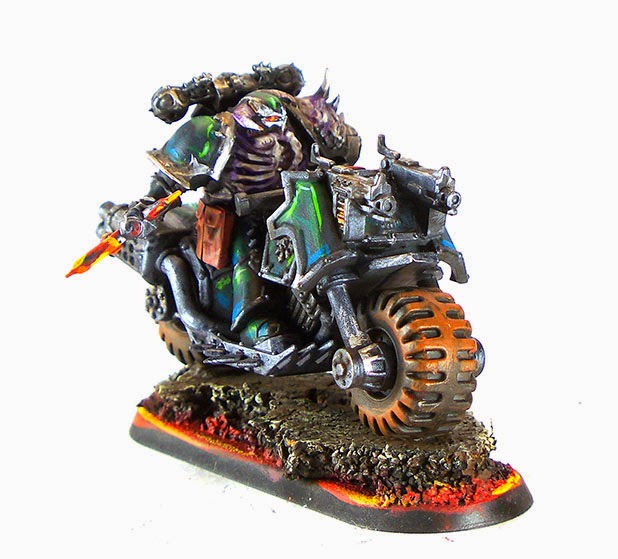 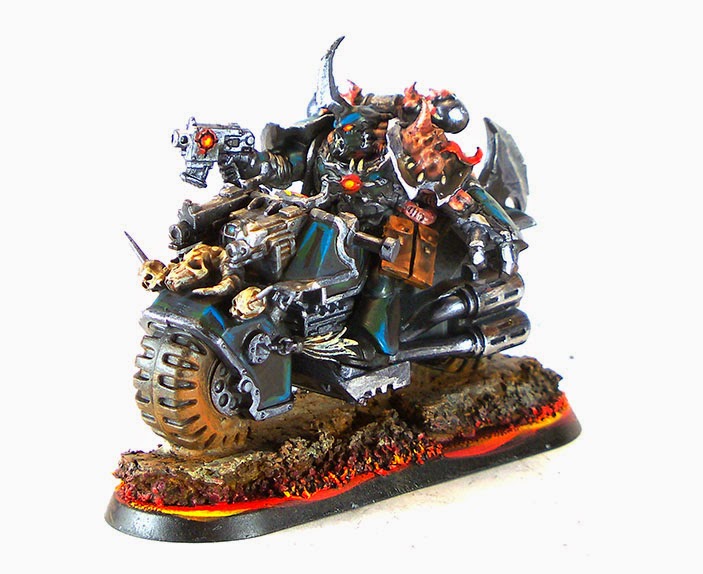 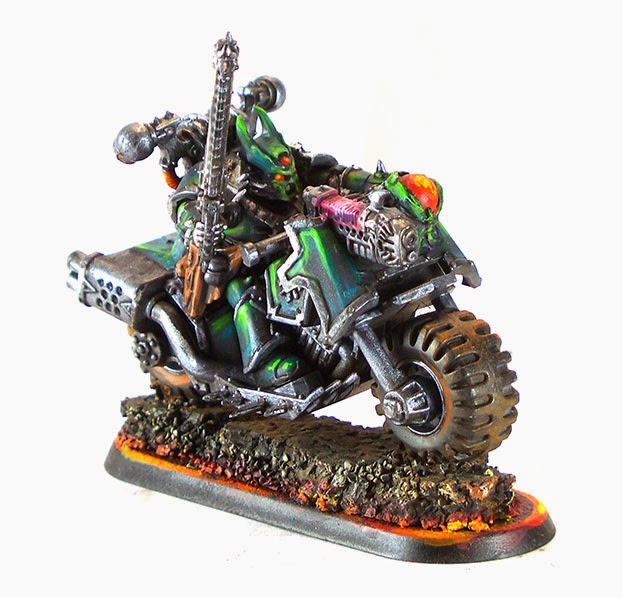 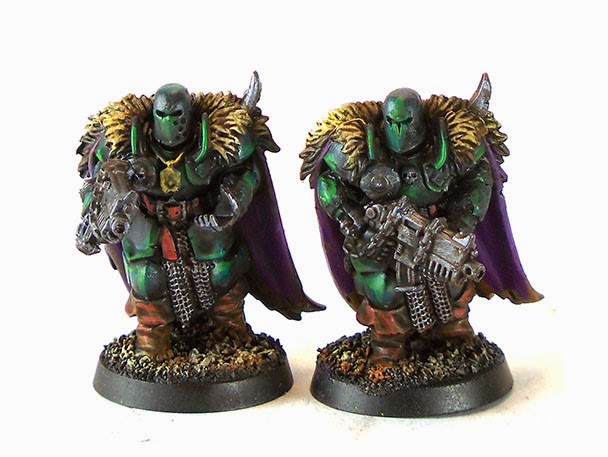 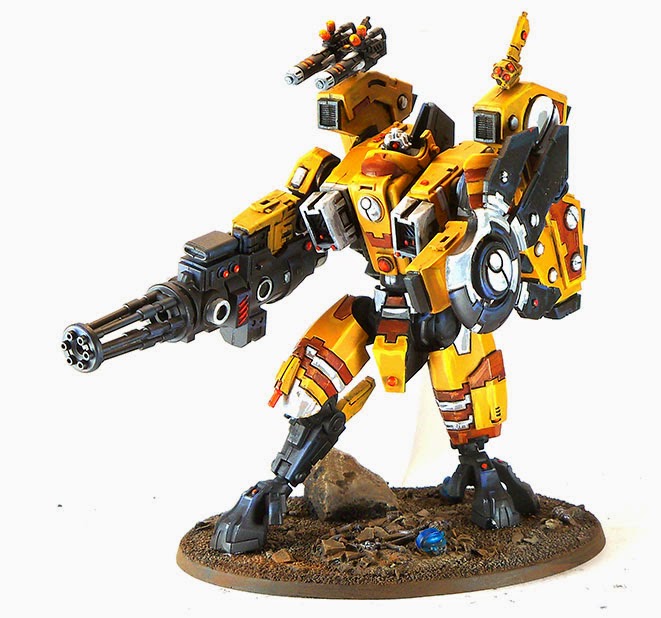 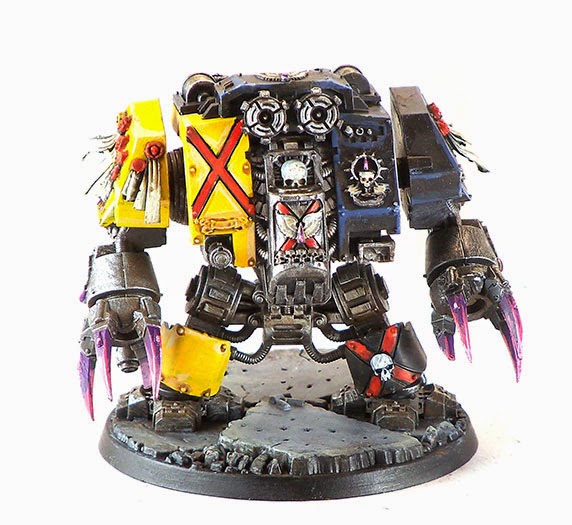 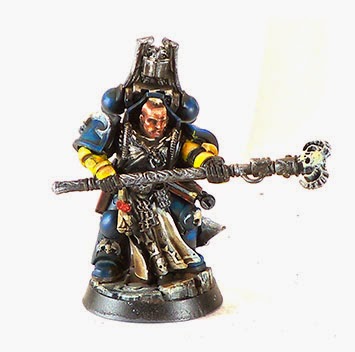 I pity the fool!

Speed paint to get them done.

Posted by Thomas aka Goatboy at 9:19 PM No comments: 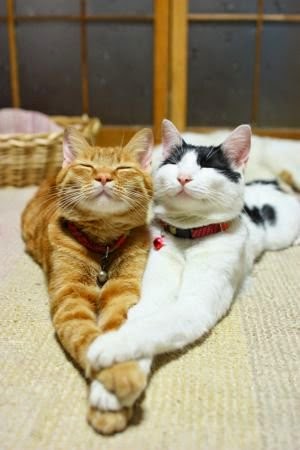 Played at Railhead Rumble last weekend - if you read up on it I won Best Overall.  Pretty stoked about it as it means my paint, sports, and battle points were the best.  Some people think that is the only way to measure the game is getting Best General - while fine in its own right - just feels like it is too much pressure to be a jerk sometimes with your army list.

Quick rundown of games. Railhead had a betting system to decide your games.  You had 2 points and it went something like this.

My army just had the single unit that would deploy so I really didn't care about much.  I had a decent amount of Kill Points - but they were wrapped up in a super unit so it was hard to pull that much from me.  All but one game was Kill Points and I played Dawn of War 3 times, Hammer and Anvil once and finally Recon.

Rd1 - Ben Mohile (Crap and I stayed with him too haha) with Necrons. Decurion detachment, plus Destroyer thing with a fat unit of Lychguard.
Dawn of War and Kill Points
Rolled Perfect Timing (Cast it once) Prescience and Misfortune
Well this is a great pull for round 1 right.  One of the other members from Team Texas and a damned awesome player too.  He got me bad the first time we played at the Boyz and I wanted revenge.  This game was all about my Apocathery from the command squad.  I failed a lot of armor saves but I was so hot on my FNP rolls that it didn't matter.  This game it came down to a bad mishap on his Deathmarks (they died) and it left me usually 2 ahead on Kill Points throughout the game.  He couldn't throw his Lych guard into my rock and I got lucky knocking down a Night Scythe with my Centurion Devs.
I ended up winning this one so yay go me.  I wanted to go 3-2 this event and I got my revenge against Ben.  Wife was like - is he gonna make you sleep on the streets hahah.

Rd2 - Another Ben with White Scars.  Khan, Command squad, Thunderfire, Hunter, and lots of bikes.
Dawn of War and Kill Points
Perfect Timing, Prescience, Forewarning
Another Kill Point game and it came down to me gutting his Command Squad and slowing taking out bits and pieces from his army.  I got ahead on Kill Points and he would have to get to close to allow me to assault with my super unit.  His Warlord was driving around and causing issues as he broke away and didn't let me go after him.  Good game and a lot of fun - I think the initials drop from the centurions was a bit too much when I took out a good section of his Command squad and then my super unit got into Khan and friends to remove them.

Rd3 - Brad playing Eldar.  He posts on DakkaDakka with his blue Eldar army. 6 Serpents, 4 Dire Avengers, 2 Fire Dragons, Auratach on foot, 2 Swooping Hawks units and 2 Wraithknights.
Dawn of War and Kill Points again
Perfect Timing (Way too good in this game), Precog and Prescience
This one was all about the Centurion Devs doing work.  They came down - killed one Wraithknight and then ended up killing the second one later.   They Removed one Wave Serpent, killed the unit out of it and then immobilized the other.  I was able to get rid of all the Fire Dragons and the 2 Swooping Hawks as Brad tried to keep me from getting into his lines by blocking me off.  I got most of my characters down to one wound each and they ran off and hide while I was up on KPs.  It was a rough go for him from the beginning but Brad toughed it out.  Good player and a fun game.

Woot - 3-0 day 1 is pretty good.  I already did what I wanted to do without a Chaos Daemons army.

Rd 4 - John with White Scars plus a Knight - Khan, Command, 3 Biker Units, Thunder Fire, 2 Storm Talons
Hammer and Anvil plus Kill Points
Prescience, Forewarning, Foreboding
John scouted up and tried to seize.  That's when my army pounced - killed 2 bike units and the centurion Devs killed a Thunderfire and put a hull point with their brown noise on the Knight. After that the Knight kind of derped around as it tried to get into them and still shoot my stuff.  He failed 3 charges and ended up getting Graved out.  I assaulted Khan and another bike squad round 2 and it just left his two Storm Talons left.  It was a rough game and John took it like a champ.  I had this huge template that had a scratch on it for a Knight explosion.  I gave it to John and he used it to kill Nick's Warlord in his round 5 with an explosion.  I call that a win.

Rd 5 - Matt from Austin who won Best General with Dark Eldar with Eldar.  Auratach on a bike, 1 Bike squad, 1 Reaver Squad - lots of Venoms, 3 Ravagers with Disintegrators, 1 Wraith Knight, Raider with Lama thingies and 3 units of the shadow daemon dark elder things - Mandrakes I think.
Recon and Emperor's Will
Prescience, Perfect Timing, Misfortune
This is where my luck when out the window.  I haven't played Matt yet locally and that is more due to the baby coming and me not always having enough time to throw down on Thursday nights.  I had a good game even though I lost and had fun playing Matt.  He kicked my butt and at least let me kill some things to feel good about myself.  I ended up losing but knew my other scores kept me pretty high in the rankings and I should be ok with Best Overall which I ended up winning.  So yay! I failed like 9 2+ saves to venoms and failed all the FNP.  I blame Ben's game for taking all those damned saves from me.  BAD TOUCH GETS HIS REVENGE!!!

Good event and a lot of fun - so thanks to Will and crew for putting it on.

I am sure I am forgetting other things - will see.

Rush job to get done before Adepticon - I got one more to do too - for someone else. 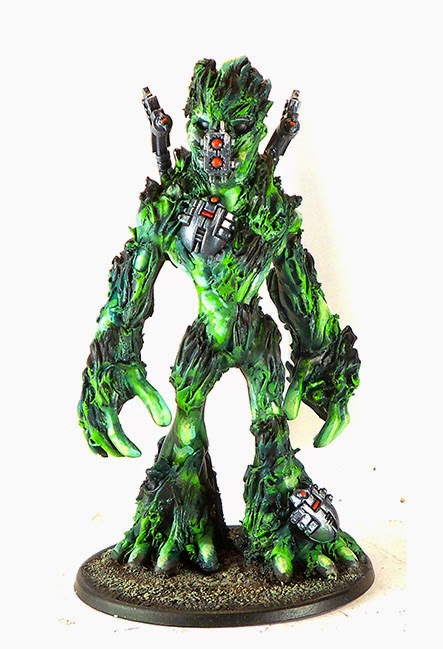 This started out as a Groot from Disney Infinity - now it is a C'Tan woohoo! 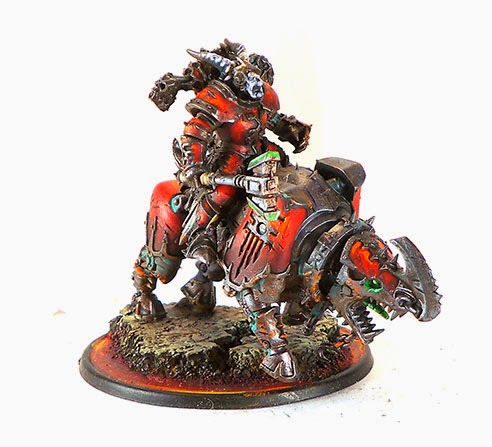 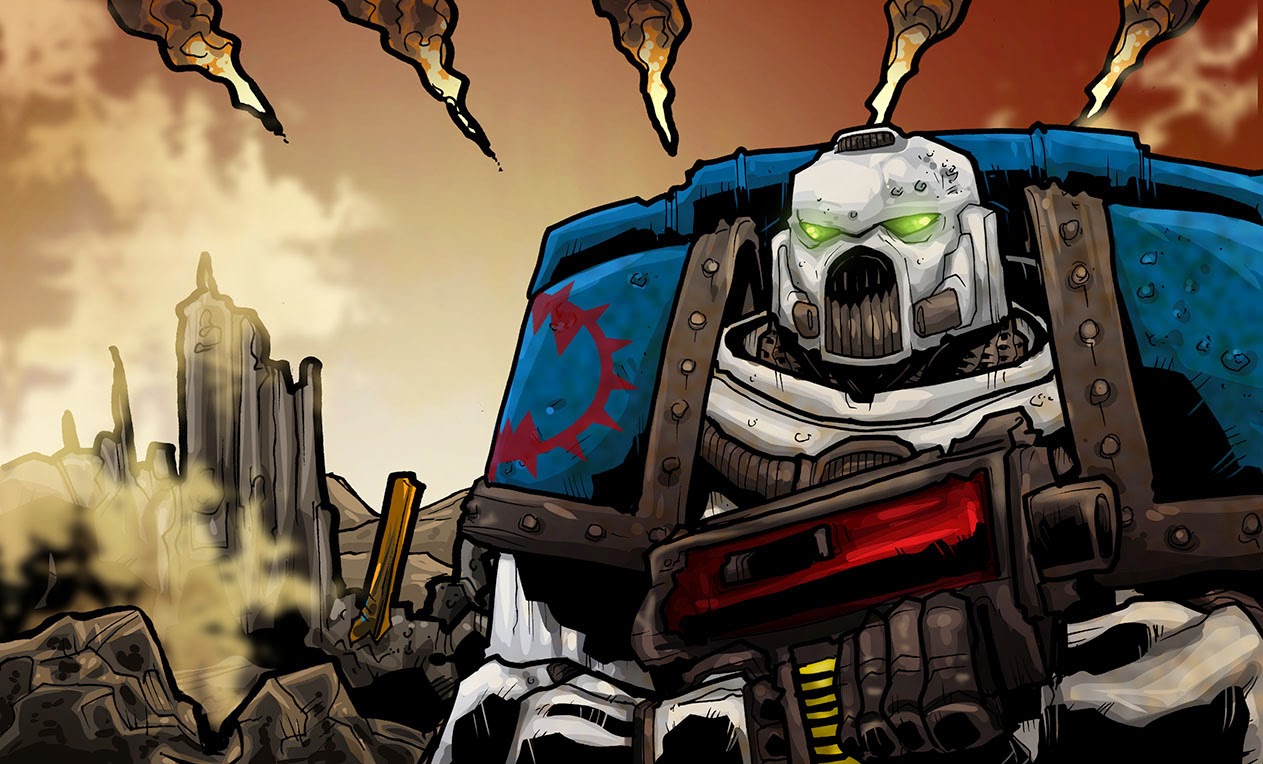 Posted by Thomas aka Goatboy at 3:43 PM 3 comments: 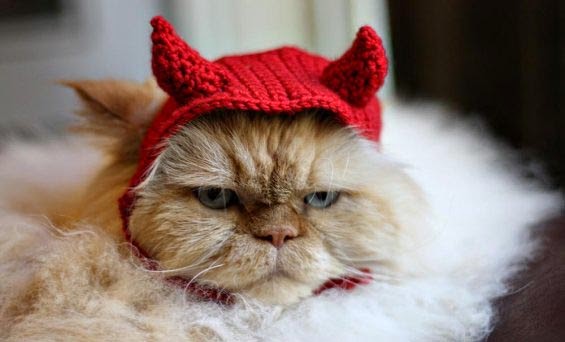 Man - LVO was fun - I did really bad but hey that is life.  Not practicing isn't good - neither is barely playing because of my boy and make sure the wife has time off from him.  Oh well - that is life right haha.  But I have another tournament next weekend in Dallas - Railhead Rumble.  I should do alright and I plan on bringing Marines + Space Wolves.  I need something different and until I get Crons or Orks working I need to play something not Chaos like.

I have this almost entirely painted thus all the random Meltabombs everywhere.  I had to get points etc.  Who knows if this will work alright - but it looks alright.  I can start the huge unit of death on the table and everyone else comes in.  I wish I had more scouts - but I only have 20 painted.  BAH!  Will write up some stuff about the games.  I will play all of them and lose like a boss.

Another idea that might be better.  Plus it doesn't use White Scars. It is dumb as hell though

This leaves you as a pain for Cent Star as you can cause issues for them.  Plus if they teleport near - you kill the crap out of them with so many Str 10 fist punches.  Plus all your guys can split up and go after all the MSU armies.  Lictors everywhere - send some priests, Wolf Guard BL and other things to each thing.  It might work - but those Mawlocs are gonna have a good time come up and eating stuff haha.  Plus your footprint is just insanely huge which is kind of interesting.  It probably doesn't work - but man it just sounds insane right?

I won't be at Adepticon.  I looked at the cost, plus the cost of a mad wife and thought - screw it.  It is just too hard to get there when you are not driving.  It would be one thing if I had the time to blow on driving but it just costs too much.  Plus - I was just at LVO.  Next year I hear they might move it to April so it could be an easier sell.  Just not worth it right now.

Paint list - kind of meek this week - catching up and some rush orders.

Me
BOLS Article - Written for Monday - will write up a Harlie thing next
Banner - Magic based - need to draw
Banner - Horus Heresy Based - partway drawn
Might have some more art to do too - will see
2 Iron Priest/Goats that are just built
Adepticon art - not part of the team - money etc - but I need to finish the art this next week.
6 Space Goat Scouts
1 Storm Talon maybe.

Brandon V
33 Legion of the Damned plus an Inquisitor - Rush Order get it done!

Some stuff to look at.  Not much because LVO and well - life. 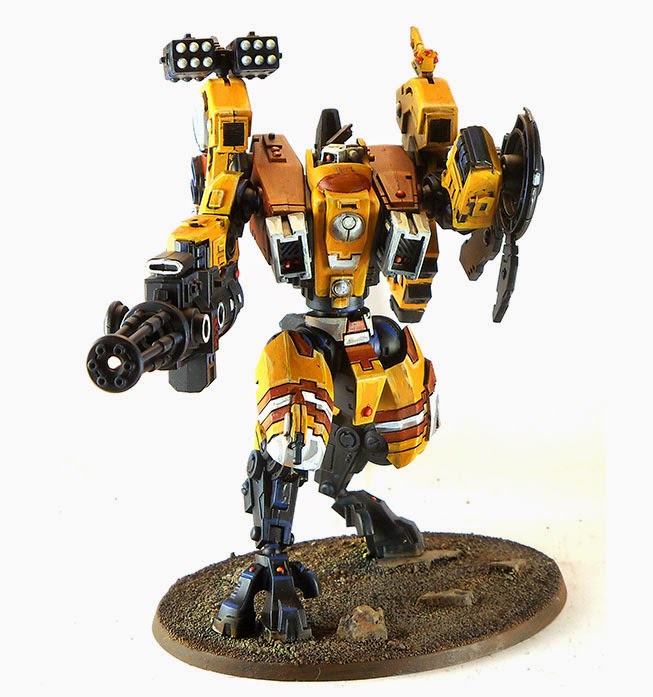 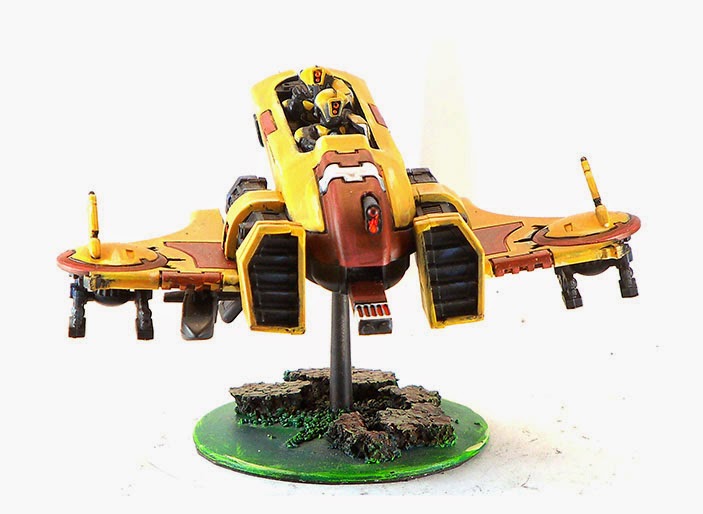 Ignore thie base - this is just for pictures. 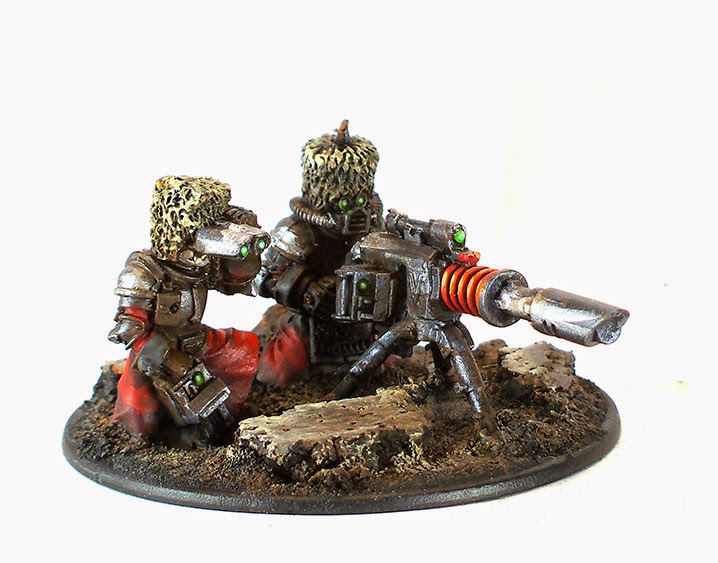 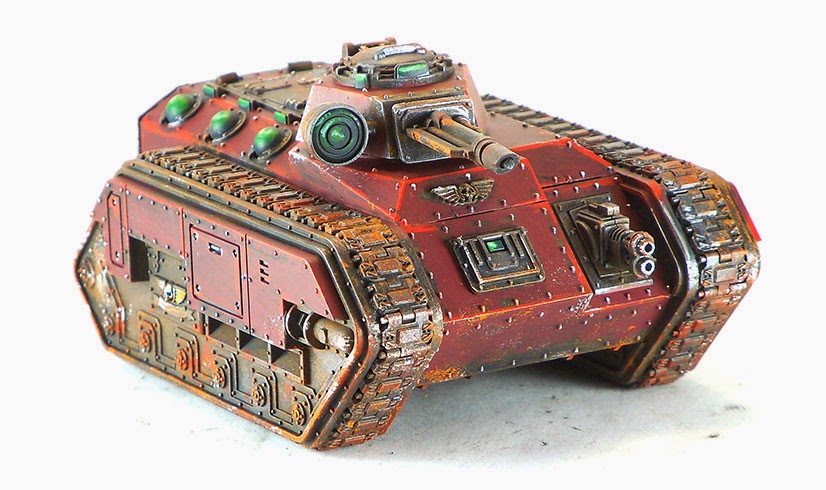 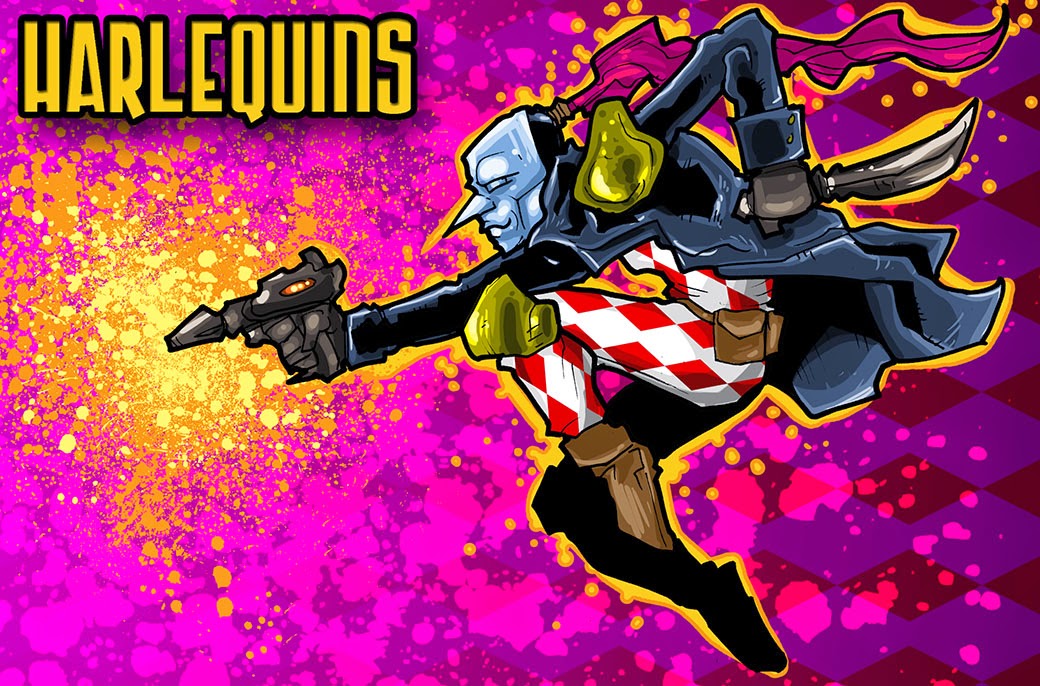 Wife is listening to the Abba play thing movie - so this is a Dancing Queen. 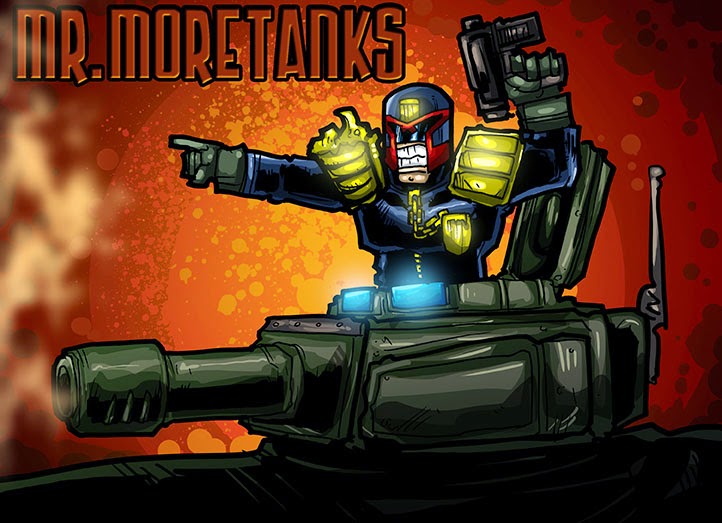 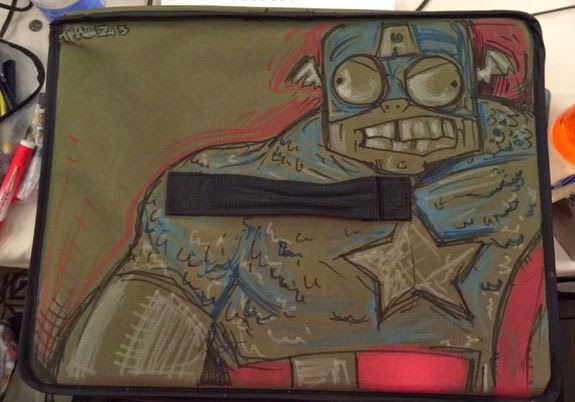 Captain A to the rescue!!! 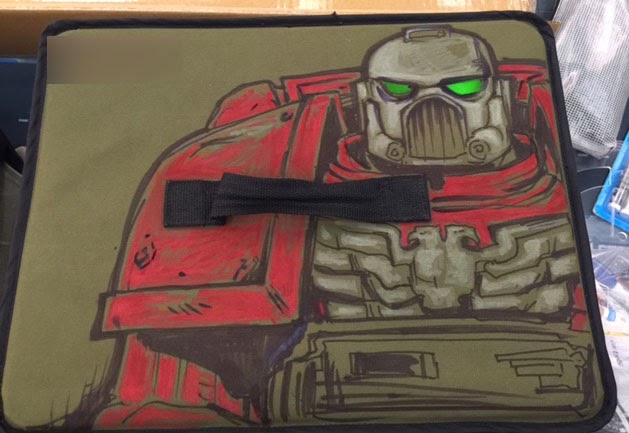 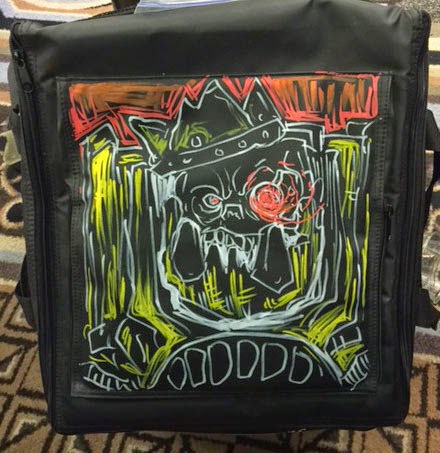