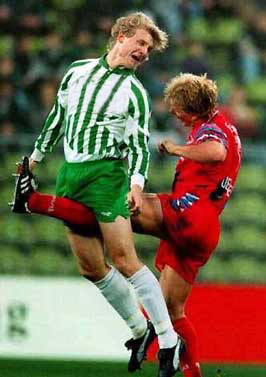 Man I am jonesing for a 40k game right now.  Hopefully I can get one next weekend - depending on what happens.  I am trying to make this SATX tournament - but I think family will trump my choices for the weekend :(.  The life of having people you enjoy to be around - sometimes hahaha.

Baby boy continues to get fat and happy.  Hopefully he lets us sleep a bit longer - but will see.  I painted up some more Chaos stuff to allow me to have 3 completed mauler fiends.  I know I used to have some but I sold them awhile ago and have always wanted more.  I wish we had a cool formation for them - could you imagine a unit of 5?  The Brawler Beef squad!

The new changes to the FAQ means Daemons are going to come out in drones during the next few events.  FMC is back - and led by the king jerk face know as Fateweaver.  I understand adding some spells to his heads as it would make sense he would have malefic - but I figure it would be better to just replace one of the "lores" he knows instead of just giving him another.

Gives you the ability to make "Nurgle DP's" with shrouding off of Bel - you could still just play straight Nurgle with Fate as well.  You could swap the Lesser + 2 Greater Gifts to get an exalted but I don't think you need the portal as much as you used too.  Heck it might be better to put the book on the Slaanesh and have very tough to deal with MoT DP's.  Getting a 2+ reroll cover save off of Bel'Akor might be pretty spicy.

I have this list built out to go play for fun.

This hits 1850 pts - has a summoning circle with the "Daemonic" Sorcerer from Crimson slaughter mixed with some extra wounds to help hide him etc.  It looks like a fun list to goof around with and probably won't lose all its games.  Plus I can say I played possessed haha.  Heck the whole thing is just mutated guys and doesn't get completely overrun with just Cultists.

Me
Bols Article - Written - it is about formations
Art for Frontline - gonna have time during the holidays to hopefully draw as work slows down a bit - will see.
Clean up some DP builds to get them working - shit if I do FMC again I will just end up going Slaanesh instead of Tzeentch just cuz I like them better.  But heck who knows.
Fix a Dragon to be the other Hell Blade I need.

Caleb
Finish NecroOrk Stompa to finish off commission - that is my hope this weekend if it isn't raining.

Man the rain in Austin sucked.  I had some things primed at least - but it slowed me down.  Heck I need to see if I can find a game maybe Wednesday night.  Will see if any buddies are still in town.

K - lets get some models to look at.  I have a lot actually to show so good times indeed. 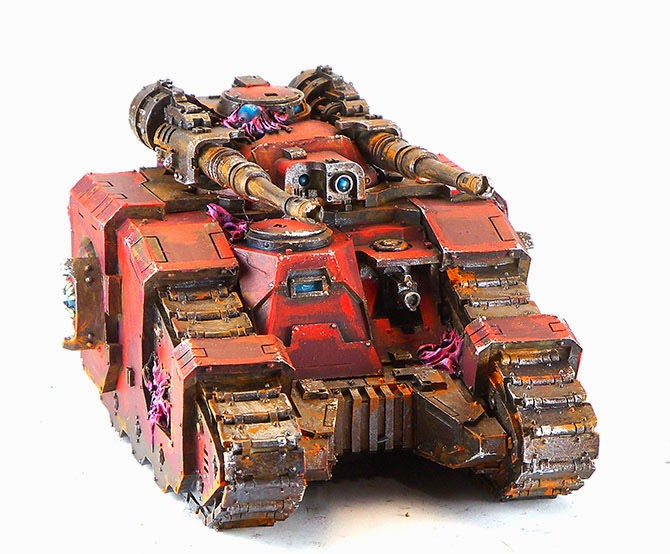 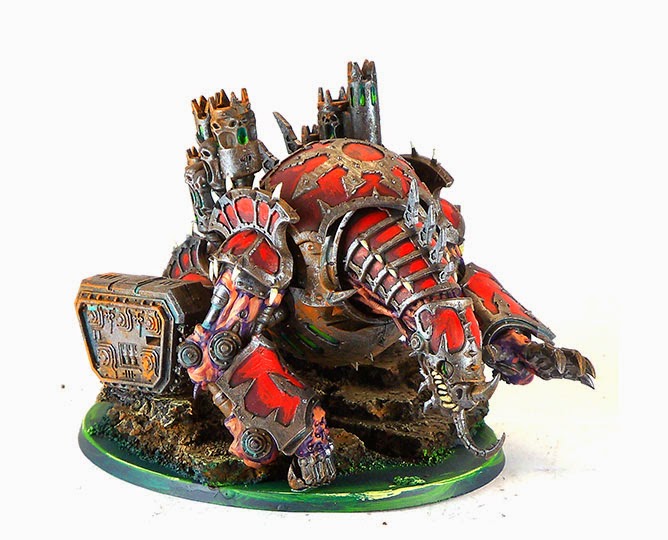 This is the non lasher tendril Maulerfiend - I got the Melta thingies added to it.  Zoom zoom! 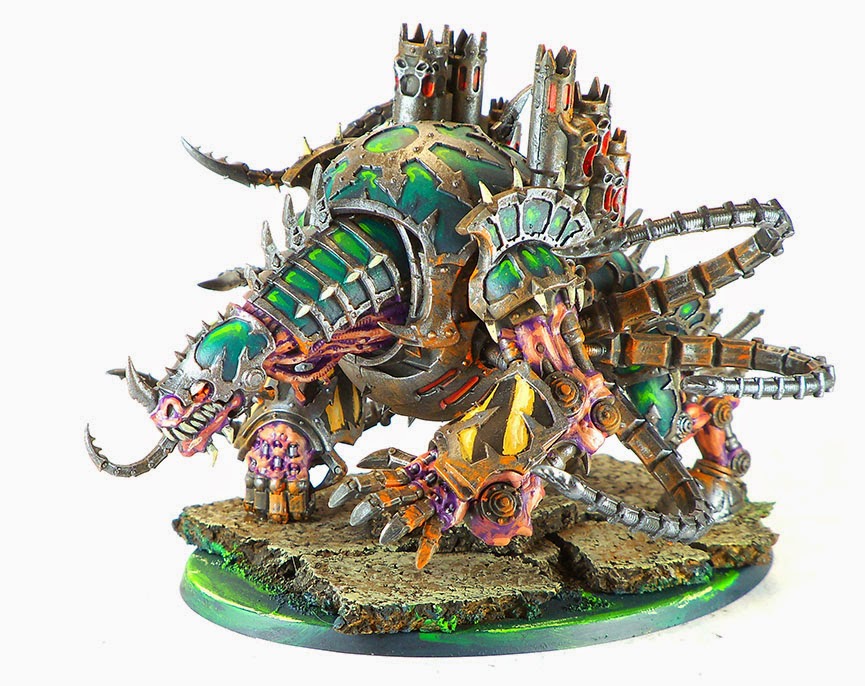 I just wanted to paint a green one - so thus this one. 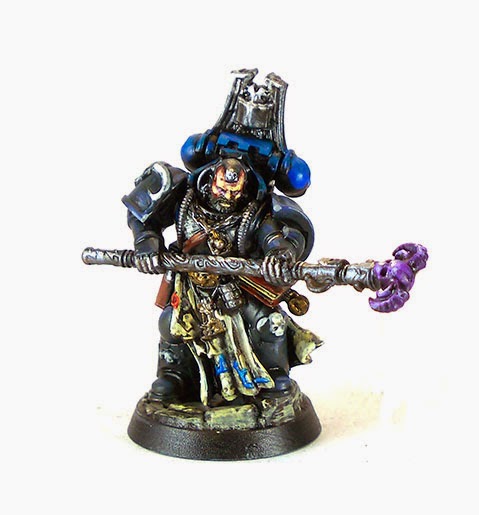 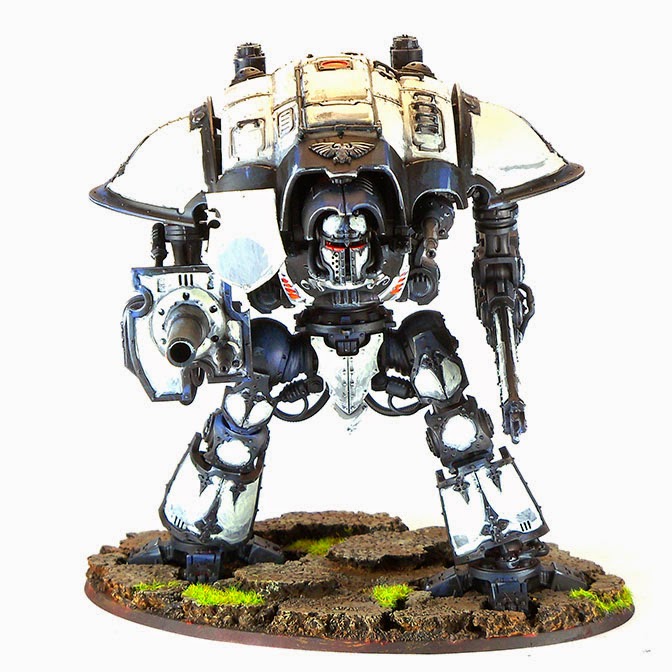 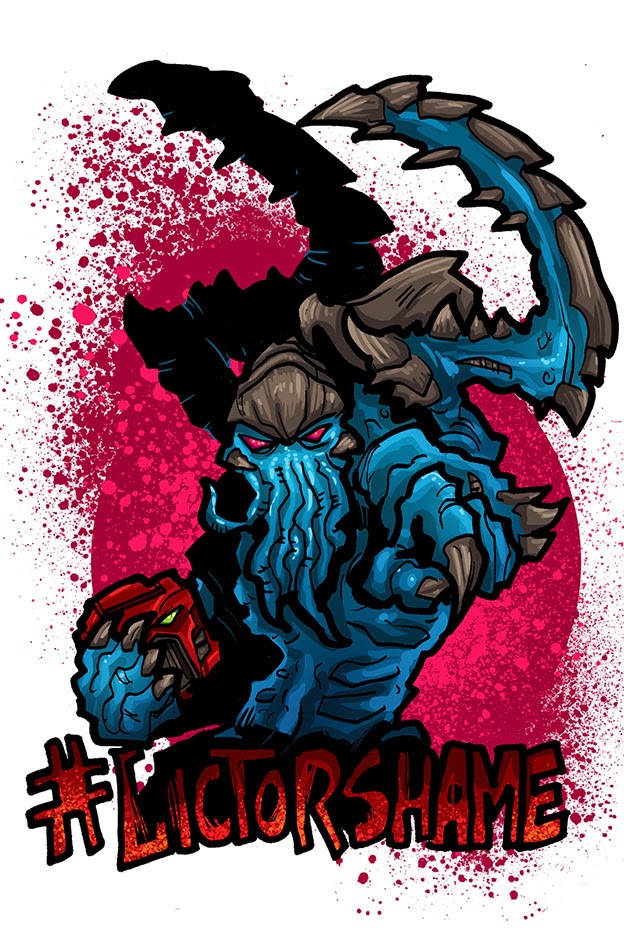 Drew this for Sean cuz it is awesome he Lictor Shamed so many people!


Posted by Thomas aka Goatboy at 12:56 PM No comments:

I am still painting!  I knocked out a bunch of stuff over the last few weeks.  Can't really do art but dammit I can paint!  Hahahaha.  Let's go with a paint list then some list nonsense.  I ordered the FW book and hopefully it will be here soon.  Got the Glothkin book too as I am sucker for that fluffy stuff at times.

Me
Article for BOLS - maybe something neat?
Sicarian - it is primed - gonna finish it this weekend
Maulerfiend - it is a weird one with wheel leg thingies - but it might work.
Build 3rd fiend

I think some other stuff too so who knows I am sure I am missing something.  I got some things sitting there waiting for me to get some major time to rework - a Nid Army.  It might see some work as Sean won the 11th Company via Lictor Shaming.  Heck I might have to work on a plastic model Lictor conversion at some point.  The new plastic venonthropes give some nice tentacle heads.  Hrm...

Played a game this past weekend with the following.

Played versus Nick Rose and ended up winning on Primary and First Blood.  We misplayed the Saint but really it didn't matter in the end as I used Shrouding bubbles to keep a lot of stuff alive via Sacred Missiles from Exorcists and other nonsense.  In the end I took his Emperor's Will Objective and contested mine.  I lost the Maelstrom mission but really you don't have to play for it in these types of scenarios.  It is why I weight the Maelstrom just as high as the primary and the total points add up to the winner.  But meh - metagaming the mission is always a part of the game.

Hellblade - seems to be pretty good.  It dies if you sneeze at it - but it gives assault armies from CSM a change to pop vehicles and mess up assaults by getting in the way.  They should just cost 115 as you will always buy the upgrade for the 6 TWL rending Autocannons.  Psycannons were good right?

Sicarian - don't waste your points on the sponson upgrades or the rending nonsense.  It isn't worth it.  Still this isn't a terrible tank at all.

Shrouding is the shit for this type of army.  Most of the time.  I got 2 Shroudings, 1 Invisible and 1 Endurance.  Not to bad but you run out of WC dice pretty quick when throwing 2 Shrouds, 1 Invisible and hopefully an Endurance.  I never had the dice for Shriek or Smite etc.  And once a caster ate it I lost a lot of abilities to spread out the mind bullets.  But Spell Familiar is the shit.

Been brainstorm dumb Ork super kill squad lists.  It utilizes the different formations to make a Hit and Run monster with lots of HQ's running around with Deff Koptas.  Some ideas that just cost to much to make the army.

So basically you got a unit of 5 Deffkoptas, 3 Warbosses, Mad Doc, and a Weird Boy.  They are Fearless, have 12 Str 10 Attacks, 4 Str 8 Attacks, 6 Str 7 Attacks, then some Str 3 and Weirdboy nonsense.  The unit is T5 and has hit and run plus FNP.  And it can go somewhat fast at times too.  Not to shabby if I do say so myself.  Oh it also has Scout and everyone has Ere We Go.  Woohoo!

But shit all those Mek Guns would suck to buy too.  Oh yeah the Mega Armored Big Meks go with them so they can move and fire.  T7 jerks will be a pain as well as a ton of AP1 shooting.  The Blitz Bombers are interesting as Bombing runs might be a way to get around invisibility and Jinking.  I have to read up on it more.  But still - ideas!

Look for more Chaos thoughts later on when I get my FW book in.  Now some painted stuff and I call it a night. 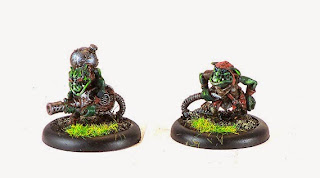 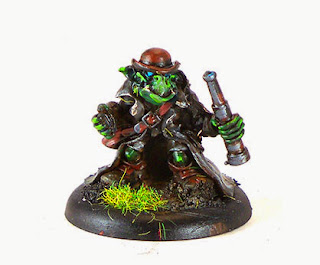 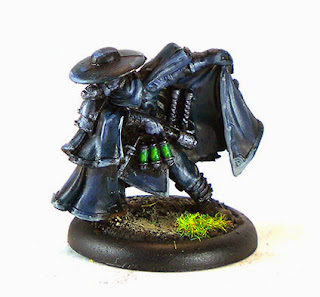 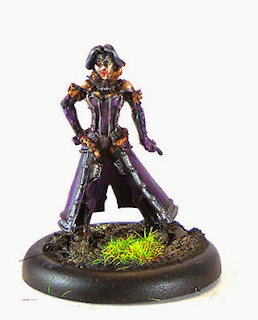 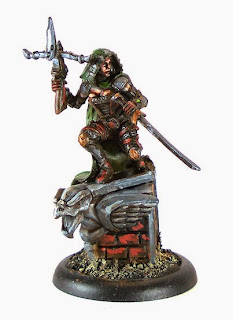 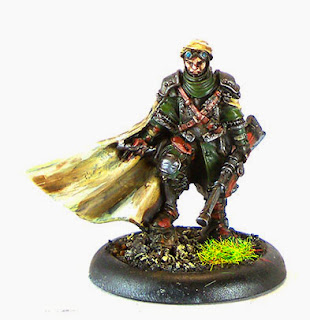 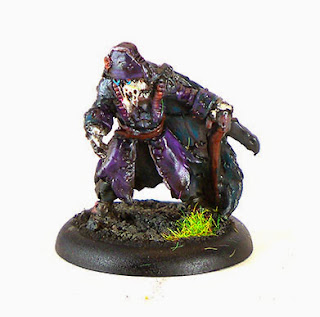 Dark Age models and client wanted different skin tones.  The Purple might be too much but screw it - they look cool and weird. 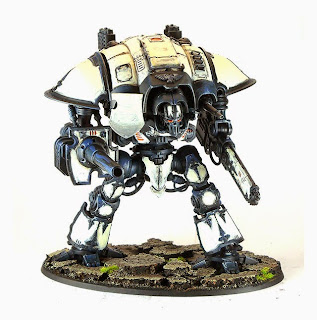 Black and White Knight is in the house! 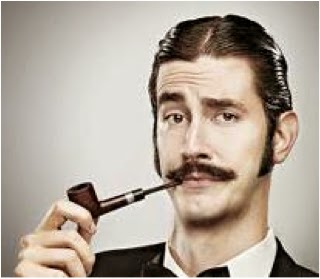 This guy is in an awesome band in Austin - White Ghost Shivers.


Woohoo - I am starting back up work tomorrow.  Hopefully my wife can handle the monster.  He has started to get more personality and enjoyed behind held staring at your face.  I think he is planning on ways to get my eyes.  Will see.  I've actually gotten a lot done over these last 3 weeks.  I should knock out 2 commissions by this weekend.

Finished the Cryx Commission
Will finish another Warmachine one too
NecroOrks will get done completely soon
LoTD Bikers got done as well
Plus other stuff.

I just never stopped.  I didn't get as much art done but that is due to being tired affects drawing not really painting models.  Painting is a lot more relaxing for me.  But that is life haha.  I also have some other commissions coming soon too - I am sure this Nid one will get started as well as some other things.  Let's write up my week.

Me
Bols Article - Written
Hobby idea - need to write it
Maybe some Orks - But most likely going to do some Chaos Stuff
Who knows what else - got an itch to play some  Chaos and I just bought that new FW Chaos book - so it means testing some things out first.
Frontline Arts - want to get them done so I can get some Nurgle nonsense

Luis
Death Company Dread - really waiting on what the BA do when the book comes out - might be a big flurry of stuff soon.

I am sure other things too as I just never stop.  I just like painting models haha.  I am waiting on some clients to tell me what they want and I can get started on them too.

Basically I try for Shrouding then Invisibility the Chaos Lord Unit.  From there I am just going around shooting things as needed.  I might have enough to knock out a knight with a dual charging set of Maulerfiends.  It should only have one attack and then I can get to going with a bunch of Str 10 hate hits.  If I get lucky with the hammer of Wraths I might knock out 2 Hull Points.  It should look fun and be a very extreme list.  In fact it is probably the list I am building next.  I kind of wish I could have 2 Chaos Spawn units but alas this one will work.  I could knock out one lord for a Sorc to get more WC and maybe another Sicaran.  Interesting thoughts.  Can't wait to get that book in.

Ok some models to showcase and then I go back downstairs to work on painting and building some models. 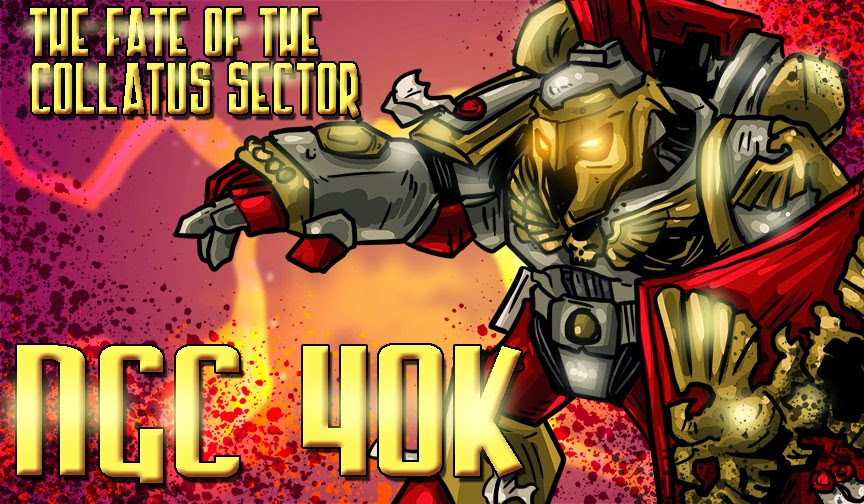 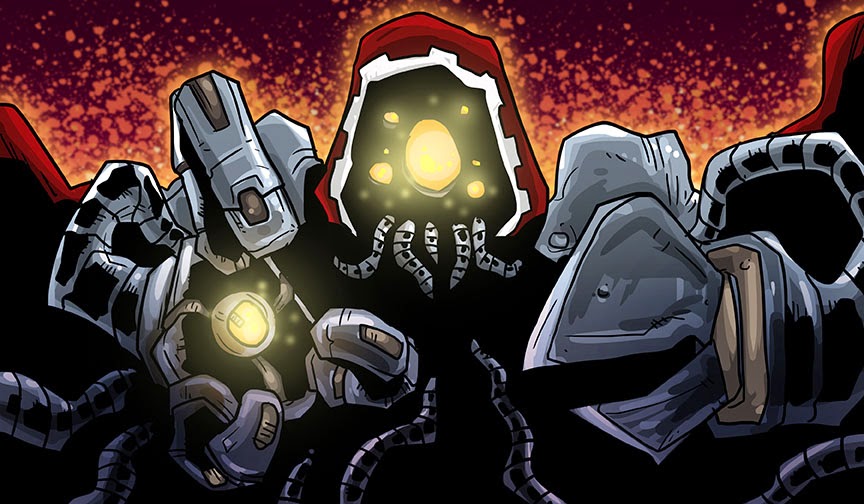 Woot - got this scheme down! 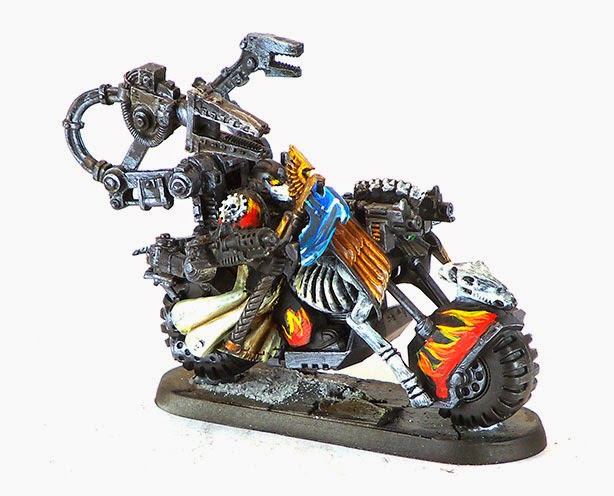 Magnetized metal backpack. It stays on with Magic.

The last of the bikers.  I am sure Brandon is going to send me more.  I got this scheme down. 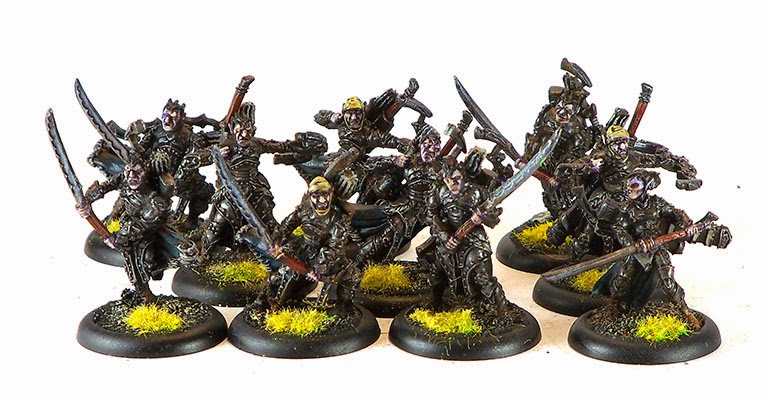 Worst models I have ever put together.  To give you an idea - legs/chest, head, 2 arms, quiver, scabbard, sword hilt, and bow.  Those are the metal parts.  Why PP why? I always liked her.  Made her mean looking.