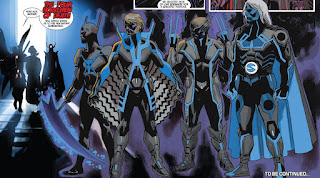 Man I have had a headache since this morning.  It has been a very very long day for me. Last week was a rough week at work and this one isn't much better.  But hey - I got all next week off to lick my wounds and continue on.

Paint wise - I am in a weird place as I have some projects done, some other stuff waiting, and some other things that are about to start.  Lots of stuff to do as usual - and a way to make sure I can get to the LVO and maybe get that Ipad Pro do some cool ass art with.  Will see.

Ok - lets get on to a paint list and then some chatter on army lists.

Me
Got all my BOLS articles written for next week as well as my assigned Frontline stuff - might grab some more will see.
Got some test ideas to do a new all horseman of the apocalpyse army idea.
Built a test Sigmar guy as my GK libbie with hammer thing - need to green stuff and add some more stuff.

Carl
Cleaned up bikes - have to reprime and hope the grey doesn't kill it again.

Not a ton of stuff really - need to pick up some small work to help alleviate Christmas costs etc.  Next year should have my promotion so random bills won't be so randomly mean.  If only I could dodge those encounters haha.

I am going to read up on the Word Bearers for a Heresy army. That seems to be the Legion I like the most and would let me hopefully continue on into some Chaos Space Marines if the rumors hold up.  Of course I now want to do a Horseman of the Apocalpyse army utilizing some Super Friends nonsense.  The combo thing I have written about in the past - but Basically Word Bearers, Iron Warriors mash up that is really Dark Angels, Space Wolves, and Clan Raccoon.  I just really hope we get a sweet Chaos Space Marine book.

Basically dual stars - randomly annoying guys who can go get objectives with decent guns, and a theme if I wanted to paint it.  Thought about using the New Chaos Guys as the Thunder Wolves, Regular Chaos Knights as the characters on Bikes, and them Marauder Horsemen for the other ones to make sure it is all different.  It might look neat as a raging barbarian army of doom.

Beyond that I keep thinking of doing dumb things with my Knights.

Like Gallant thing and something that gets me a bunch of MSU Bikes.

I mean it looks dumb - these Knights are there to die and if they hit something - well they are gonna punch it to death.  And randomly enough the Dark Angel guys are annoying with reroll saves everwhere versus other armies.  Plus I could do the Dark angel powers for nonsense.

Hopefully I can get a game or two with the week off so I can get more practice with the BA/GK thing before LVO.  Unless I get a wild hair up my butt I think that is the army to mess around with.  Sure I can get shot off the table but meh - that means the game can be fun.  Plus I am throwing my lot into the hopes to not play some things.  Will see. 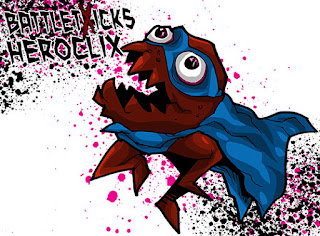 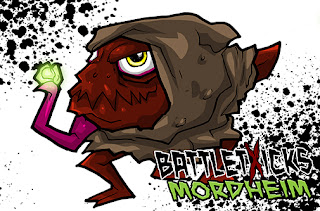 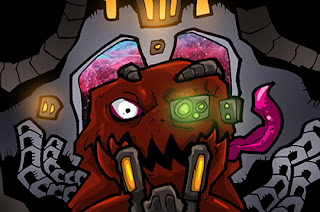 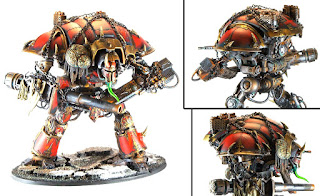 Evil knight for the win!  I bought a used one and fixed it up for a client. 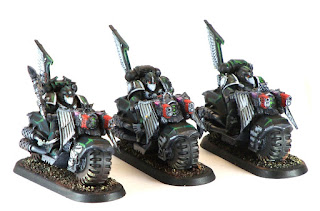 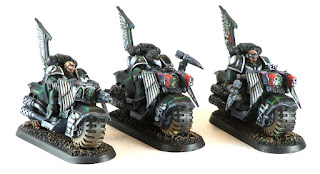 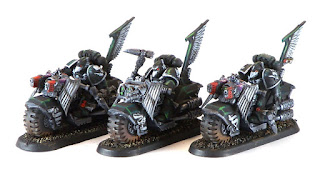 So many Black Knight bikers! 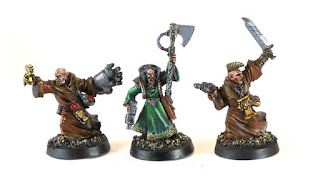 Found these in a pile of stuff - One client loves the old metal stuff so bammo - he got some!

More half and half Bikers for Nick.  I have some Attack bikes to do and the bike lot is finished then some heresy marines.
Posted by Thomas aka Goatboy at 2:27 PM No comments: 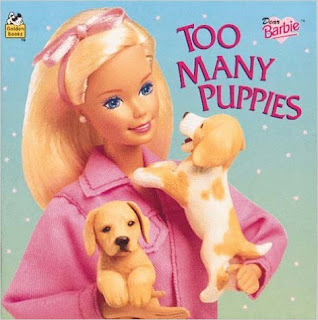 What's happenin hahah.  So far so good this week.  It is the end of they year - stuff is getting slower at work and life is moving on alright.  Have to get the wife a birthday gift and a funny xmas gift.  Our gift to ourselves was Halo and 2 Year Xbox live haha.  It gets hard getting gifts when you have a one income household and I am the type that is like - we get what we want/need when it comes up etc.  As a kid we just got cash from family so I never got into the cool gift giving thing etc.  Oh wells.

I won't lie - I like those new Chaos Horse guys.  Don't like the cost though.  I guess I could use some store credit from doing Frontline stuff.  I got my Horus Heresy box set as well as a Blood Thirster.  Those things are just sitting there - asking me to build them and paint.  Jerks.

Me
Artwork for a Banner - drawn just need to color
Maybe something else for me?  Who knows
Bols Article for next week

I am sure there are other things to - this is just off the top of my head.

Damn the ITC and making the Big Mek Stompa available.  I wrote about it on BOLS but man it has me thinking.  I think going all SAG isn't worth it that much - but maybe going 5 - Lootas inside to ensure I can move 6 inches and shoot etc.  Meh!!!

The thought is to utilize 2 30 man boyz squads to keep guys from getting to me.  I don't know if it is worth it that way or not.  It is just an idea.  I do like seeing a bunch of shokk attack guns shooting out of the Big Mek Stompa.  It would be hilarious to see the damage I could cause with a ton of random stuff just throwing out of there.  I need to really think of the list more to see if I can work it out.

The Idea is that inside the Mek I have
Tank Bustas X 5 with Attach Mekboy - Gives me one Fix it roll at 5+
Buzzgob Fix it roll at 5+
4 SAG Big Meks, with Attached Big Mek in Mega Armor - gives me the one 3+ from Mega Armor plus 3 5+ or 4 SAG shots.  If I don't move I can have them all separated and shooting at different targets.
Warboss goes with the 30 Boyz - gives some threats to things getting near and a reroll 2+ armor save if needed.
The 3 Deff Koptas are for Maelstrom.
Gretchin just get in the way like I need them too.

It might work - I took the last week off in December so the temptation to finish an Ork army during that time is great.  I just either need to figure out a cool SAG conversion or just buy the plastic one with my Frontline Writing credit.  Temptations.

I almost went and played a random assigned team event this weekend.  1000 pts per side - but my Dad came into town so that nixed it.  I built and painted some models instead.  And watched some TV Shows.  Ash Vs. the Evil Dead is great by the way.  Gonna hit up Jessica Jones later on during the winter show break.  Probably Aziz's show too.  Just watching dem Netflix.

Ok enough of that - stuff to look at. 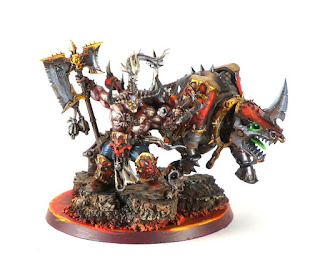 Woot - finished this one up last night for a Client.  He saw the one I did for myself and wanted one. 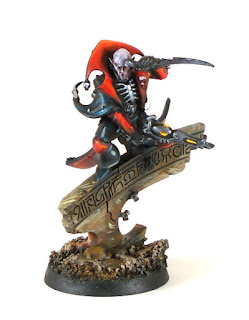 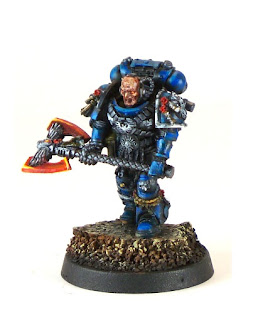 This is a model I always wanted to paint - found one and painted it as a librarian. 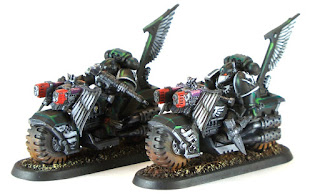 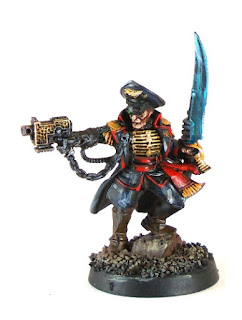 You will taste discipline or my blade! 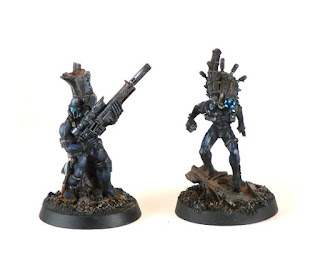 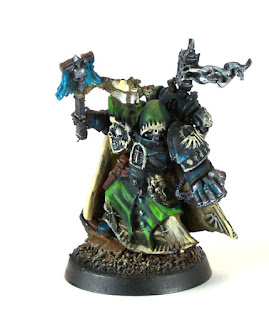 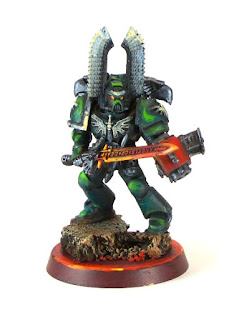 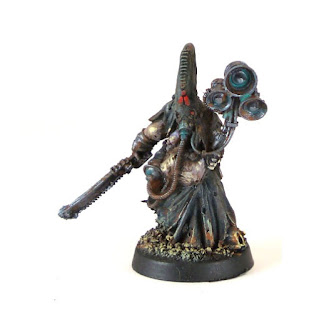 Posted by Thomas aka Goatboy at 5:51 PM 3 comments: