Hi there, hope people enjoyed the painting how too.

Hope to get another one done for my pink Slannesh Chaos marines. Beyond that, I have to finish the ork bike army so I can play it and test it out. I don't think it will be all that good, but damn it will be a lot of fun. And I am sure I will have those games where I seem to make all my cover saves/feel no pain and just go assaultin through everything in my way. It will be funs haha. Things left to do for it... 1 biker for the red squad, 1 Warboss (Gonna make a mechanical squig for it, might end up doing something with a sentinel... hrm... for a super fast walker thingie...) and 8 more bikers for the blue squad. Fun stuff. I will post an update for the list later on this week.

Beyond that, I bought the 40k daemon spearhead. The Soul Grinder is rad, and most likely it will be end up being the second defiler. The army list I want to play for daemons follows.

This way it would split and both would work out right and both would play fairly similar. The thoughts would be the flamers pouring down fire and if they get close, flame the shit out of stuff. Daemon princes are moving dakka with a gross flame attack that can target another unit. With a 4+ inv, they have a good chance to survive just about anything and be something that should have a ton of fire poured into it. Daemonettes will hopefully get left alone and the Pavannes going off should have my opponent reeling as I move stuff around. Will see.

What do I need to buy with this list? 3 more boxes of Daemonettes, find a way to make a cool Herald, and build one more Daemon prince. I like this one thread of Dakka that has a Daemon prince getting made out of a sentinel, so I might take that idea and put my own twist on it. Hopefully this army will be fun. Either way, it will let me get some daemons to mess around with my normal chaos stuff.

Rework of Chaos fist coming later on this week. Also with more art. Fun times.
Posted by Thomas aka Goatboy at 8:26 PM No comments:

How I paint and stuff.

Hi there, today I am going to throw up some stuff about how I paint things fast. The dry brush/wash way. This way allows me to bust through entire squads in a bit over an hour and a half. It isn't the cleanest way, but for orks and chaos it can be a great time saver.

So here we go. 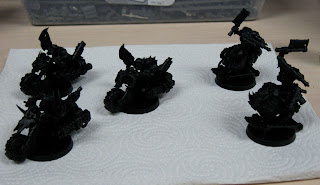 After doing the black base coat, I go ahead and start my ork base colors. I do this kinda sloppy, since I can easily fix any mistakes easier. For these bikers, I use a catachan green for the base ork color. I like to use this, because this is a duller color, and really looks good with a nice highlight hit from the lighter green I use. 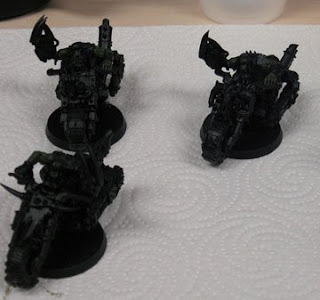 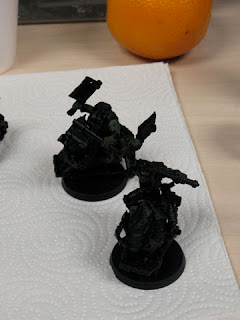 Here is the rest of the base colors. Brown for the boar fur/pants. Tin Bitz for the metal as a base coat. And an Antique/Bleached bone for the base of the skulls etc. I drybrush the skulls, since I want some of the black to show through. If I was a bit heavy, I might go over it with a flesh wash or a brown wash, but I was doing alright today. 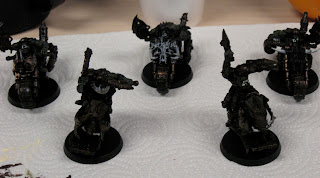 Now it is on to the first level of high lighting. The ork green is hit with a very light, almost limish green. i like to do this, because I know I am going to bring it down with a wash and this really gets the highlights hit and makes my orks stand out a bit. I hit the brown with a light snake bit brown and start to use some more antique/bone white to highlight smaller bits of the tin Bitz. I also mix in some boltgun metal on the metal bits. I really want this stuff to look rusty and kinda cobbled together from whatever metal they find.

Now on to some inking. You can see the ork flesh take shape here. 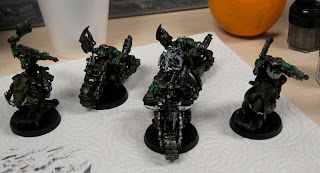 Now to another highlight layer, with the same green to bring out the flesh and other small bits of dry brush highlighting. I also use a small pen to help add black lines to distinct parts of the model. This helps break apart the model a bit, and give you a way with a really controlled line. Some say it is cheating, but I say, use whatever you have available to make a good looking model. And I also say pants are for the devil so I might be crazy. 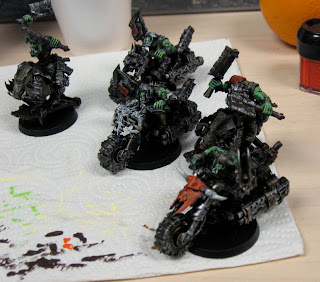 Add some rocks and wham you gots em based. Total time, about an hour and a half. Hope you enjoy. 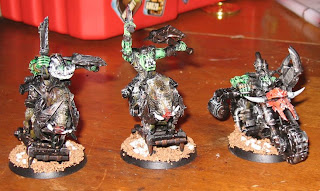 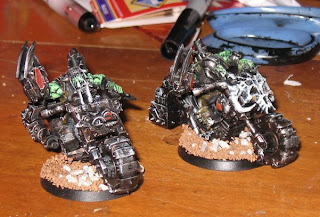 Posted by Thomas aka Goatboy at 2:20 PM 2 comments:

Right now, still recovering from the crazy drive to Chicago for Adepticon. I had a good time, and mostly good games. I wasn't too happy with some of the Team Stuff, but it doesn't help that the army I played wasn't in my style, and that a lot of armies we played against, were not that much fun. But the Gladiator games were awesome and had a great time with my opponents.

So a quick run down of each game as I remember it.

Game 1 vs a Nurgle Army ran by a cool player named Mike. It was an escalation game, and that hurt his army a lot. Most of his stuff was in reserve and I ended up killing all icons when his greater demon and one squad of demons was supposed to come in. They poofed and I just took apart the tiny bits of his army that were in. All of mine started on the table accept for the demon princes. Max points on that one.

Game 2 vs a IG army with a Baneblade vs David. I lost this one, and just couldn't kill the bane blade even though I assaulted it twice with a demon prince. IT moved six inches so I need a 4+ to hit and only hit once on each attack and didn't penetrate. So that was a nice loss there. No points earned. Really nice army and a really great opponent.

Game 3 vs a Tau player named Anton. I had the game for most of it, then his movement just took over each side. I think I might have had more points, but I messed up. Good game and if I could have rolled a 4 for a massacre for one demon prince, it would have been a much better game. I was a bit too aggressive and my slow army couldn't respond to the fast movements of my opponent. I got 3 points that game. Nice looking army and a good player. Knows the Bell of Lost Souls guys and likes Austin. Might move here at some point too.

Game 4 vs a Witch Hunter's player. Good game and an awesome painted army. Really nice and a good player. His son was rolling his dice for him, and he had some really unfortunate rolls here and there. It was fun playing them and had a good time. He is from Louisiana and I think his name was Eric. I don't remember haha. Either way, it was fun and a good game. I won on that one.

So all in all, I went 2-2 and really should have gone 3-1. But oh well, that is life. Again this makes me want to look at a much more mobile list, with a better fist to hit the opponent. Lists to come.

Team Tournament was not that much fun. Instead of nice armies, I just ended up seeing a lot of cheese. But here you go, with a bit of a report.

Game 1 vs Dark Eldar. Me and Nick played this team, guys were cool and the army was nice looking. 3 Webway portals is gross though, as is 19 dark Lances. Our small elite force was scared, and pretty much I hide my land raider and rushed out on the last turn to take over the center and win some points. Again, this showed me I don't like a list like this, and next time we are playing something more fun.

Game 2 vs Not really Pre Heresy Chaos. These were young opponents and a rule calling lost us the game. It sucked, but hell that is life. Big issue, is that they had an empires children, Thousand Sons, Death Guard, and something else, but all sorcerors had lash of submission. So instead of having the correct leader types, he just cheesed it out to be the most powerful. Annoying game, but not terrible opponents. Still, not very themed. So Poo on that.

Game 3 vs Drop Pod marines. We won this one, but really, 13 drop pods apiece. 3 drop Dreadnoughts? Screw that. We won because we moved out and just was able to assault crap and blow it up. Still not the most fun game and the guys didn't know the rules really at all. Brandon and Nick got cheesed out and had different bits sniped out by the wall of drop pods. Just not a fun list and again more reasons why people can just build crap armies.

Game 4 vs some Mech Eldar. F this game. 3 Falcons in a team game? Screw that shit. F the eldar on this one. Basically they hide their main force and flew around shooting us. We quit and just said screw that. Bad game and just no fun to play.

So that went 2-2 with one game just being a big old F-bomb on all of it. Ugh.. so screw mech eldar. I am building a no Falcon eldar list. Overall a fun weekend, I didn't lay on Sunday because I hung out with friends on Saturday night. Stayed up to 5:45 in the morning. Bars there close at 4am, so I was up for awhile haha. But I still had fun and a good time. Will I go again? Sure, but this time we are having a team list that is a lot more our style. Might be a huge nid swarm list like they should be, or an Ork list with floating monolith ork creations I am going to work on heh.

Biggest annoyance... too much Big Bugs and Mech Eldar. Ork Horde is next up, so will start bitching about them too at some point. I still like my Chaos and will keep on working on a heavy list I feel is a good strong hammer to smash the opponent with. I will post up my next list in a few days, I wrote it, and I think it will be fun to play.

Oh onto some art. First, Dark Angels terminator and then a big bug. 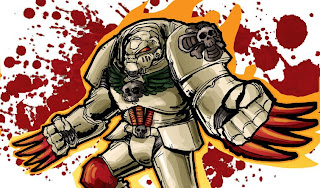 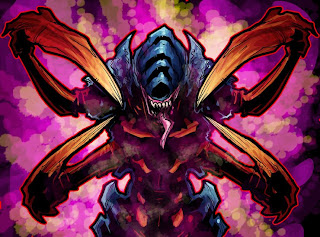 Posted by Thomas aka Goatboy at 6:28 PM No comments:

Some updates of arts!!! 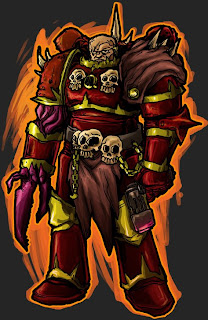 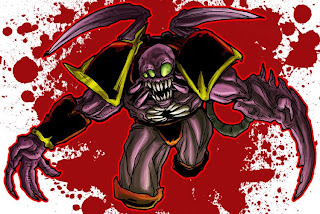 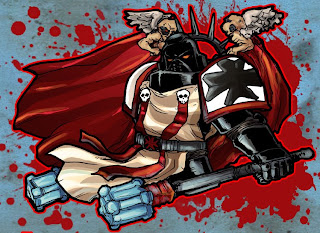 Different stuff just randomly done as my freelance has slowed down as of late. So yesh.
Posted by Thomas aka Goatboy at 10:04 AM 5 comments: