Some army lists I currently play 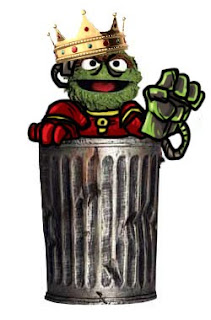 Figured I would throw up some of the lists I like to throw down with. So without much more - some lists!

Pts 1995 - A very in your face smash you list. This list does not like to see Nob Bikerz as well as a fast Eldar army as it can be hard to catch up etc. Very aggressive and fun to play as you get to mess with all sorts of nutzo stuff in Space Wolves. You can drop the LR's and go with more troops if you want. That is another idea and I have played with it before too. I just like this design as it gives me a ton of heavy stuff for armies to deal with. Drop one Iron Priest, go with two Rune Priests and add the fifth Thunder Wolf if you want. Canis is there as he is super cheap and can dish out a lot of pain. You can also change out the Wolf Lord for a Sage of the Bear/Thunder Hammer load out. Conveniently enough it is only 5 points more :).

Pts - 1990 - This is just something fun to play around with. Bikes are always neat to me and this is my current "fun" list. Zoom zoom zoom.

Pts - 2000 - This is my shootie as hell ork army. I have killed many a Terminator by shooting a bunch of shots and rolling over them. I have had some fun Death or Glory runs at oblits and watching bad rolls on the trying to penetrate table.

Pts: 1994 - This is a fun hobby like list that is just designed to put a ton of guys on the field. The fluff behind it is a mad scientist, The Father, has built this army. Kharn is his ultimate fighting machine and the Possessed are who ride with him. They have shields to try and protect them from Kharn's crazy antics. The lesser daemons are zombies too. It is always fun to run lots of rhinos around the board too.

I know there are better options in some of the lists, this is just stuff I like to play. They work for me most of the time but they might not work for everyone else.

Oh and some painted stuff too - Orks, Warmachine and more Purple/White IG 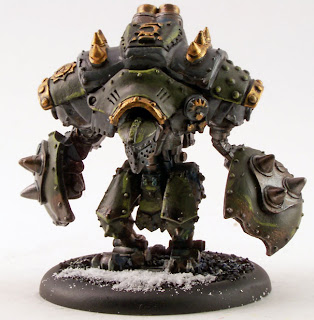 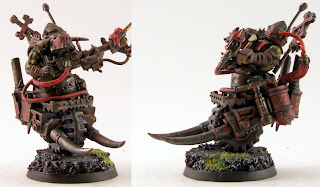 Woot what is up - Goatboy is here 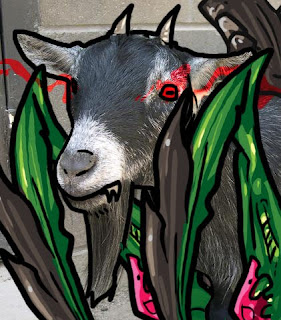 This last week was busy. I had to cover an fellow night time employee so I couldn't get a game in on Thursday. I am hoping I can throw down tomorrow if there are any tables left during the fantasy tournament. We had 36 for the 40k one last week, so there is a good chance it might not be a go team Venture. I went 2-1 in the tournament, facing an army I painted in the second round that handed my Space Goats a butt whuppin. Fiends are the shit in the Daemons codex, and if you have to play them, you better hope your army has a ton of shooting. I didn't with the Space Goats, so that was a loss for me. If I played my BW orks like I originally planned, I would have most likely dealt with the many boobied monsters pretty easily. Oh well.

So lets see - what did I do this week. I painted a lot and will show a bunch of pics. I got a new camera last week, and it is really giving a people a chance to see how much more subtle color work I put in my models. This means a whole site overhaul on the photo side and probably some changes to some other bits. And starting up the online store with prepainted work etc.

So first of all some IG stuff I did for Darkwynn. 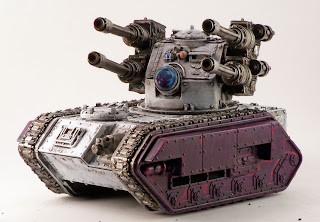 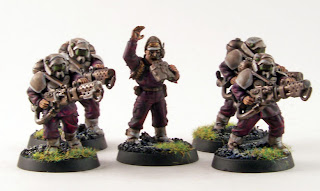 This next week I plan on finishing another Chimera (done 5 already!), a manticore, and 2 Medusas. If I feel like it another squad or two will get done also. Will see. The heads on the IG are Pig Iron Productions. They are pretty sweet heads and really makes his guys stand out.

I also finished up some dreads for my marine bike army. The second army build within the list is to add in 2 Iron Clad dreads with pods. From there I might add some regular ones and a Master of the Forge. That is the plan. Also this army will be my blood angels army when it comes out. It is easier to keep the scheme and the rumor is I can still run bikers as troops in it too. Will see if that stays. I wish they had set that up in Space Wolves, as it would give you a neat and interesting army. Oh well they got Thunder Wolves. 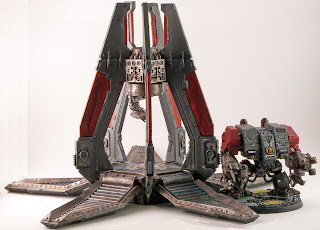 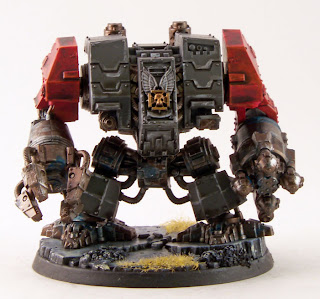 Also the local store is having a painting contest and I went ahead and did mine already. I spent a week or so on it and will probably add more. In fact, I have another board to set up, a Big Mek on uni wheel I will show later on this week, as well as an extra Battle Wagon to really create the full squad. If I get the Battle Wagon done it will be all tricked out, with grots running around, a deff rolla and other nonsense. It will be set up to exactly what I normally run, and this unit will be my entry into other Painting contests as well. 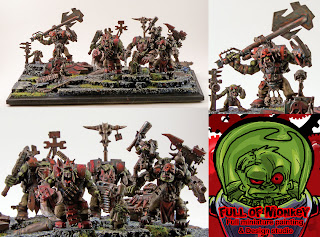 The plans for this week are more orks for the local store owner, maybe some Elysiums to finish off the order from Spain, some Warmachine stuff for Big Red of BOLS, and the second drop pod to finish out my bike army for the local Hobby Tournament next month.

Later on this week I will post my hobby list I am planning on playing as well as some of the other lists I normally run. Any interest in my ork builds or current Space Wolves, CSM, or Marine Bike builds?
Posted by Thomas aka Goatboy at 8:47 PM 7 comments:

Goatboy is here - took a break

I painted a bunch of crap - finished off somethings and I am close to finishing this new extra marine bike army. I don't know how good it will end up being, did a small test run versus a weaker IG list and won the kill point mission in the end. Things performed alright, and melta guns as usual missed hehe. And now I won't take Vulkan, I want bikes damnit!

So quickly for everyone here is the "final" bike list that I will hopefully have finished by next week to the week after. Also next week wednesday is my birthday. 32 years old, married twice, no kids and finally out of "debt" etc haha. Good times. Will see what the next few years have for me (hopefully still married, probably no kids yet and still out of debt with like 3 more painted armies haha). The paint business is doing well and I hope to have more clients this coming year. As well as upgrading my camera (it needs it) and moving into some other games. I will be at Adepticon this year, so if you are going give me a shout or just yell at me for some random stuff. So enough here are the lists.

The goofy plan of this army is to outflank and just zoom around and hope my 3+ cover save lets me get into some trouble and mess some guys up. Will see. I went with 2 Plasma guns because 1) it is fun 2) it is different 3) might help versus trygons and other nonsense that might pop up and annoy me. So will see if this is the right build and right set up etc. Either way it will be fun.

The next iteration of this army will change into the army of robots and let me create a new rock to the rock, paper, scissors, lizard, spock metagame of the area. Here is a run down.

This list gives me 40 points or so left to mess around. I am not sure what to do with it, so will see. Might change the weapon load out on the guys, or maybe drop some points and try to fit in speeders. Who knows. It is all just different thoughts as I really like to play with dreadnoughts and to finish this army, I would need to convert one character, and paint a bunch of "gasp" dreadnoughts. And do some goofy conversions. I will be sure to magnetize the arms as I am not entirely sure how the "rifle" dreads will work. They look "alright" on paper so I will test it out. This is based off the list we have seen posted on Stelek's site and is worth something to look at and mess around with.

We have some tournaments coming up and I am not fully done with what I want to play for Adepticon etc. Currently for my "heavy" army I plan on playing Space Wolves. I really want to take Njal for a spin. It is pretty hard though as the FAQ makes for some pain in the butt if going second. I might just drop him, run two rune priests and call it a day. As well as two Wolf Lords hehe. If I could only put a Rune Priest on a Thunder Wolf. Damn you GW!!! (Not that I think they should, that would be too much)

So current Space Wolf builds - tell me what you think.

Or do I drop the Long Fangs, go with a ton of dogs and just run at you as fast as I can? Thoughts?

Might be some nid stuff thrown in there too as well as starting my plan for my submission for the local paint a unit contest. I am thinking a nob squad for Orks as I am really liking the new style I have been doing for a client. So will see. Lots of conversion work is the plan as well as a nice paint job :). 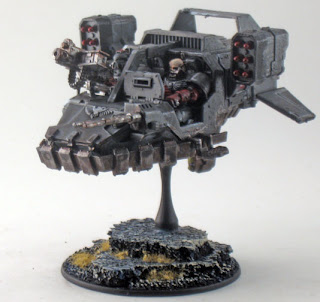 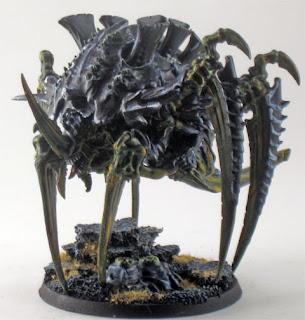 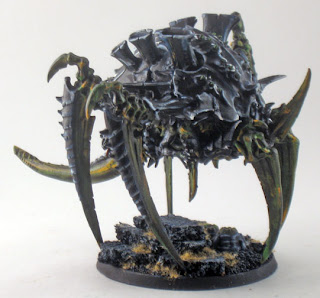 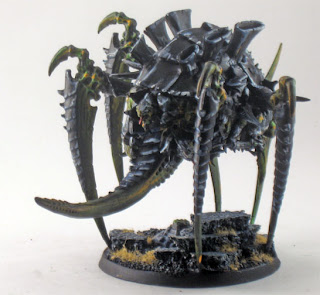 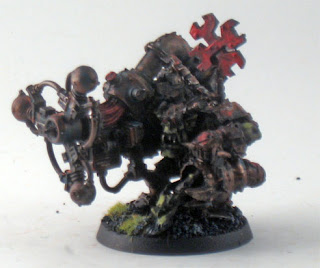 Posted by Thomas aka Goatboy at 6:29 PM No comments: