That's what kept me from posting an update this past weekend. So today I try to remedy that haha.  I got my ATC list - but no chatter yet on it cuz it has to be a secret or Nick gets mad at me haha.

Wargames Con - went 3-1-1 and lost to Crons pretty bad.  It made up for the beating I put on a Crons player round 3 - sorry Aaron that my army just went off like a jerk.

Rd 1 - Some objectives all over the place - Played Vince who is friend with some El Paso peoples I like.  He was the guy who got Top 8 at LVO with the Brass Scorpion.  Rough as hell list.  I ended up just having 2 Knights left.  Basically a strong Summon center using Grim Scorpion.  I won this one due to the dice just wanting me to win.  I knocked off 2 Hull Points of the Scorpion through a 2+ inv save in one turn.  Yeah Math!  Awesome game and a good start to the weekend.

Rd 2 - Aaron with Null Deploy style Crons - Wraithstar, some stuff, Destroyer Cult.  Aaron put just the star and some Warriors hiding.  He busted his solar staff one turn and the next I was able to kill off the Entire Wraith Star thru grenade, guns, and a massive assault.  It was kind of nutty how much damage I put out.  Learned the the Wraiths only get to reroll save if they have RP up.  Woot big win for me here.  There were no metallic dead left.

Rd 3 - Carter - knows a lot of the Mississippi guys.  Playing Dark Eldar with Eldar. Venom spam.  It was the Relic so he had to come up and I just started opening up Venoms.  Things I learned at this one - Fire Dragons will kill a knight with one round of shooting.  Let alone if I even charge them.  Good sport and good game.  I ended up drawing on his Table War case as it had the flat side.

Off to a 3-0 record with an army I just threw together.  The dream ran off the rails the next 2 rounds though.

Rd 4 - Local Matt - CC Nids.  With my knights being objective secured this game was not going to be a cake walk.  We've run through the scenarios if I run Obj Sec knights and I just end up winning.  Swarm, 2 Malanthropes, Tervigon, Endless Swarm guys, Trygon, and that FW super Big Assault guy.  He generates 2 table edges so it can be a pain for an army without massed Obj secured guys that are hard to kill.  I ended up winning Primary he got Secondary and we both got the same Tertiary.  True draw.  Wasn't very fun for him - which I understand as he couldn't kill my knights. I killed his one chance with the FW assault guy through not a ton of firepower and 3+ cover save. Mo Dakka!

Rd 5 - John from El Paso with his Crons.  I had some hot rolls and this was the end of that as John killed Knights through massed 6 Gauss and positioning.  He couldn't remove the Death Star but man those knights went down so fast without doing much of anything.  I took off some Hull Points and killed some guys.  Rough as hell and a good butt whippin I deserved.

I went 3-1-1 and got 2nd best appearance!  Frigging cool I got that and didn't expect it at all.  Reese and them show that they just know how to run events smoothly and professionally.  I really appreciate the chance to get to play and have a good weekend for Father's day.

Enough of that - let's look at my paint list and then some models.

Me.
Paint this cool as hell Thunder Wolf Werewolf thingie built by my buddy Delgado.  I get to see him at ATC woot!
BoLS quick DA review
BoLS random review on something neat.
Work on parts of the ATC army as I will borrow some things
Art for The Long War
Art for another commission -
Probably more art.

I am sure some other stuff I am forgetting.  I always get sleepy after vomiting out a ton of random 40k nonsense.

I have some other stuff that will be set up too.  Looks like a ton of bikers. 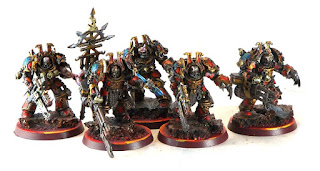 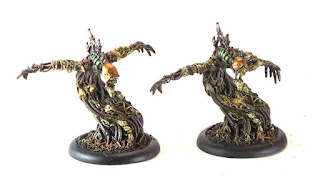 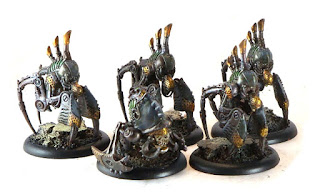 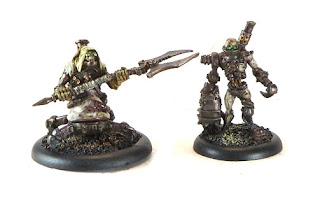 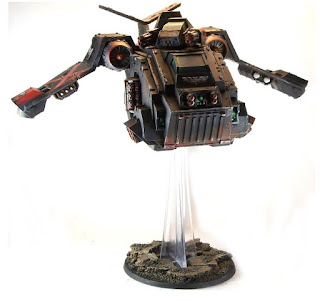 Fixed it had to do some crazy missile stuff. 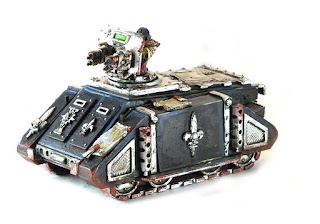 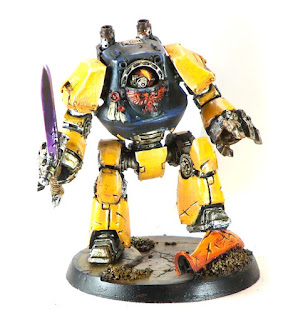 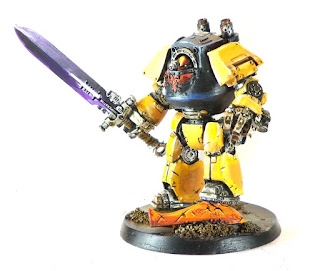 Nick used these as Ironclad Dreadnoughts 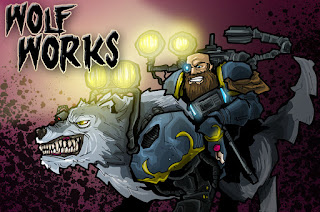 Posted by Thomas aka Goatboy at 7:42 AM 4 comments: 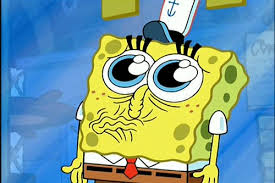 Been a long week.  Boy has been teething and he is lucky he looks cute haha.  I got in a tournament before the Wife goes out of town for another get away weekend.  She is going to go gambling so wish her luck haha.  I am just glad I am able to watch the boy so she can get a much needed break.  It gets rough cuz babies really eat up a lot of everything with the mom involved.  I am just glad he is healthy, I can watch him, and that it isn't going to destroy my mind too much.

Luis
More Flesh tearers stuff and Marine stuff once new book gives me the info on what I need to build and update.

Maybe some upcoming Chaos Space Marine stuff and maybe some Fantasy stuff too.  But man those rumors look rough.

Objective Secured Knights are pretty strong.  They stop a lot of people's idea on winning games Versus knights - take objectives and hope you survive the stomp etc.  They stole objectives, kept people from contesting with all these decurions, and were just a pain.

The Knight Crusader was amazing and has continued to show how strong this jerk is.  He killed so many bits of opponents armies that it really was the lynchpin of all 4 games I have played with it.  It makes me think I might need to do 2 with the list - but will see.  It might be worth it to do 1 and then the 2 wardens get Missile Launchers on top.

The Space wolf add on was not worth it.  I am waiting to see what Marines give me as Drop pod Cents might be good or I could just look at Admech.  The Temptation to do 3 Sources with Flesh Tearers detachment to get some Drop pods for my ad mech guys.  Its a thought.

Game 1 - Vs Matt and a basic Chaos list.
This was a mismatch as my army was just very rough for his.  He had some Chaos stuff, Daemon Prince, Plague Marines and a cultists.  One knight did eat it when a Chainfist got him in the butt from some Terminators.  He did end up stomping them out with a 6 as he fell down.  I killed everything by turn 3 or 4.  Matt took it in stride though and I just feel bad when the game is so one sided.

Game 2 - John Wayne - local kiddo who has a cool Dad I am buddies with as well.  He was playing Decurion Necrons with a crazy Lychguard star.
I made a mistake and killed too many lychguard with shooting to not get all my knights in charge of the star when it got over.  I got lucky, survived a bad round of combat and then grinded them down with the Wolf Star.  The Storm Shield was lucky.  Obyron did kick the crap out of my warlord titan cuz he doesn't have a D weapon and that jerk made all his Reanimation protocol rolls and then just cut him to pieces.  Still won this game with all the points.

Game 3 - Local buddy Chris with Wraith Host Eldar.  1 D Scythe, 2 Wraith Guard, Wraithlord, and Wraith Knight.  He had an aspect host with Spyders and 2 Dark Reapers.  I killed one set of Dark Reapers real quick and the other set didn't do jack the entire game by never rolling a 5+ on their pen chart.  The Wraith Knight did some work and if the game went to turn 6 I would have won.  But it ended up 5 with 2 knights about to get to an objective.  Funny thing one knight exploded to some D shooting and then scatter towards the jerks 12 inches.  It killed some.  The game was left with a Wraith Knight and a Wraithlord that survived my dakka.  My guns failed me turn 5 but that is ok.

Overall I did ok and my buddy Chris let me get in on some of his credit to get another Ad Mech leader guy.  Woot - that gives me 2 and enough to get an Ad Mech group started.

I have all of this and will get it built and tested soon.  It sounds alright for 2 sources but if we do 3 it might be worth it to drop all the rockets, one Dominus and get drop pods for all the Destroyers.

This might be the better list etc.  But so many Cads and Detachments makes me feel... meh.

Models and some art to check out. 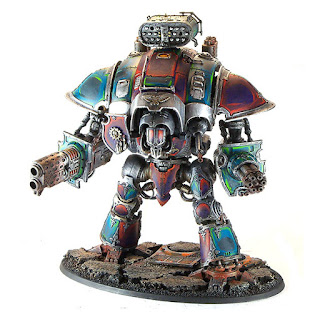 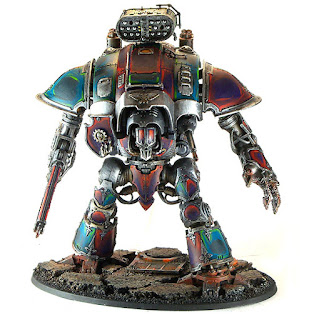 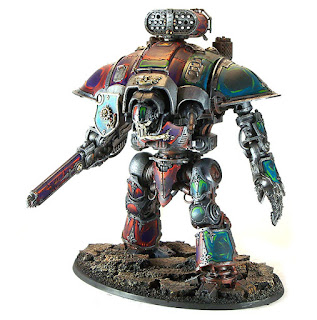 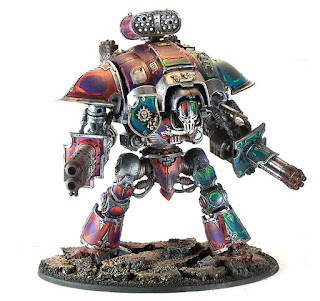 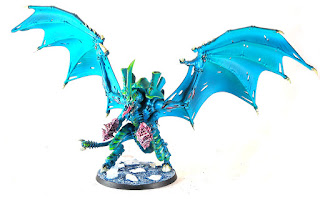 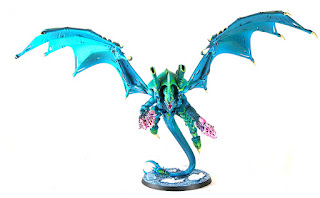 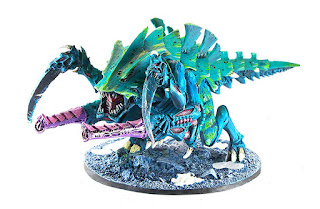 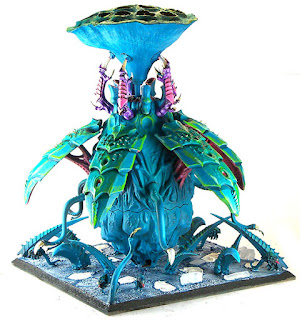 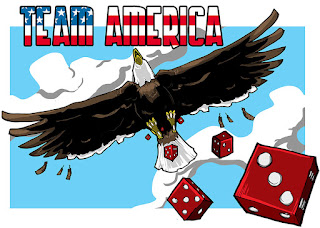 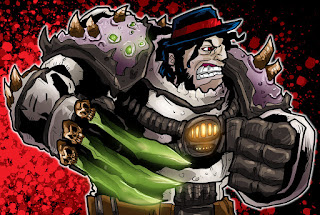 Posted by Thomas aka Goatboy at 8:14 PM 3 comments: