Sorry for the lack of posts. I have been just trying to get small things done as I prepare for the weekend of DICE known as Adepticon. So today is just a post with some new things I have painted as well as a BA list I might tweak and mess around with to help fight along side the Space Goats. Oh I also made a shirt too, that I will have on at Adepticon, graphic below. 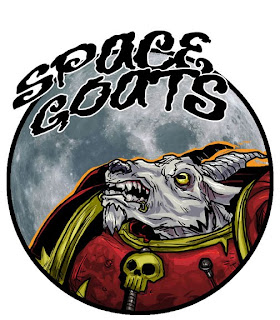 So first things first - I played the Lone Wolf Fantasy GT and got 3rd best sportsmen. I went 4-1 and people still liked me hah. I think it comes down to the fact I a) Don't like to feel like I tricked my opponent b) I let people take back stuff. I have really strived to just be happy when I throw dice and this weekend was a lot of fun with a game I am not super fond of all the time. I played a Chaos Lord and he went around killing things with his Hellfire sword. Fun times.

Beyond that I am still working on some client IG stuff, Nid Stuff, and some Warmachine stuff too. I just like to paint all the time. The newer things that are coming out keep getting better and better so I am happy with the time I am spending. Right now I am ramping up on my own personal Goat Angels since they are only a few vehicles away from completion. After that it is my own Nids once I finish client Nids. Fun fun fun.

So enough already, onto some minis. 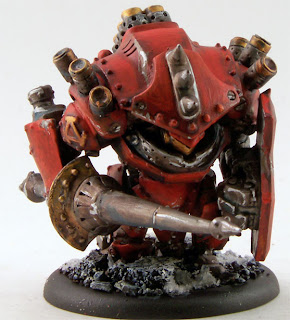 Two more Jacks and this clients order is done. This is a pretty neat model and I like the battle damaged modeled on it. 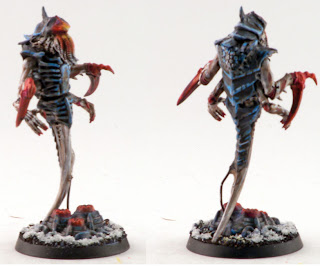 This is a crazy conversion for a Zonathrope. His brain is starting to suck in energy to shoot out a beam. I am thinking the next one will have a ball bearing in front to represent the power being sucked in. Thoughts?

Another batch of Elysiums for Luis. 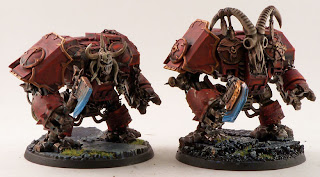 And finally some Goat Angels. The two Dreads are Librarian Dreads with super strong arms. I wanted to go with an arm that is sorta like a gladiator with the extra armor that he can push and shove forward. The Death Company are basically the Goatmen that did not convert all the way over, thus they are fed blood until they are crazy and sent forth in a blood haze. Fun times eh?

Here is the Goat Angels list I am going to initially build. Changes that might occur is dropping a Librarian Dread, Powerfists on the Death Company, to fit in another troop choice. Not sure if it is worth it yet, but it is something to think about with the ability to combat squad. Might just be a tactical squad too. It just kinda depends on where I can change up points.

And finally after playing Warmachine a few times, I have found the card system for keeping wounds to be pretty neat. So I went ahead and made me a Space Goat one as well as a WoC one too. The Space Goat one has all the HQ's on it I normally take, as well as the Thunder Wolf Squad since they are a multi-wound unit. I am thinking i will make an Ork one for Nob Bikerz too. The WoC has hte EOG table on it, so you can mark off what they have. It also has slot to mark off what numbered spells you took as well as wounds for himself and his mount. I uploaded the High Rez versions so they should print fine to fit in the card sleeves. 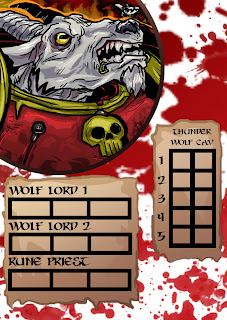 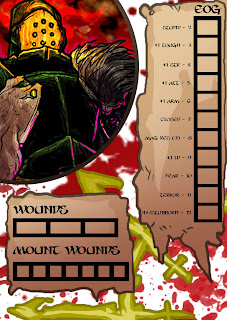 If these interest you I can always make more. I am thinking of doing all my spells for Fantasy that I normally use. Instead of using Magic card art etc. So much to think about haha.
Posted by Thomas aka Goatboy at 9:41 AM 10 comments:

Sorry I have been absent

I have been busy with the hell of March. I had a comic book convention locally where I sold prints and other things of my art, I have Lone Wolf GT next week for Fantasy (not my most favorite game), and then the big daddy Adepticon the following week. So Goatboy has been busy. Lucky for me, I got my stuff pretty much knocked out and the IG army for a local client finished already. I just have a few ork things to do for a local client, who will borrow some of my ork stuff too. So all in all Goatboy has been busy.

So lets go with some miniatures to showcase first and then my Lone Wolf List I plan on throwing down and hopefully doing alright with. Most likely not, but hell we can always dream.

This is my Cryx stuff. I have a set of Bane Thralls to do, the Bane Thrall Special Solo, Brute Thralls, and a Seether jack. Once these are done I will be pretty much ready to go with my Cryx. There are some new things I want, but those can wait. I might also dip my feet in Khador as I have been painting them for clients and really like the model look. Damn you model crack! 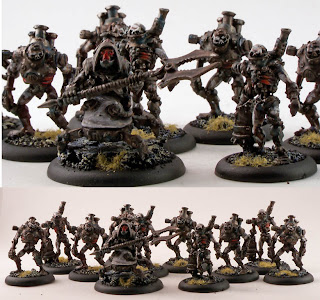 Here is the first Khador for a new client. I have a 2 Dracos to do as well as 3 more Jacks. These should all be done after Adepticon. I have the two characters built so I plan on doing those this week. 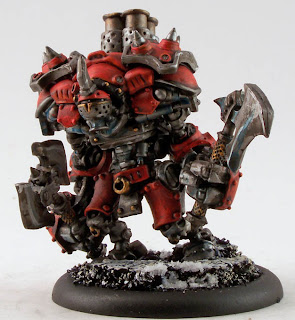 Now we go into the Warhammer Fantasy Chaoslord on a Chariot I plan on taking. I know I will play an Empire or Dwarf army that will just be ready to throw a Strength 7 piece of flaming death at him. He is MoT so maybe he will survive (so is the Chariot). Either way he should be fun if he hits someone. He is built out of the Chosen Command Squad, corpse cart, and a Juggernaut of Khorne. 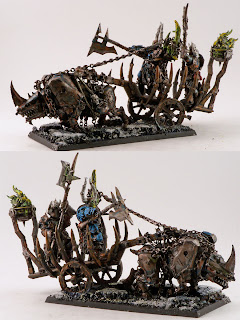 Now we have some Nid stuff I finished up. The client understands I am going to be busy this month, so look for a larger push after March finished punching me in the Jimmy. They are a grungie style list that will look like they all have come from the mud of an invasion. 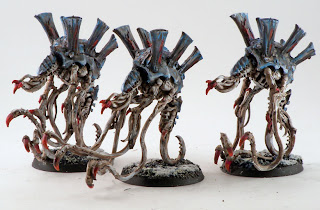 Finally I wanted to show my Ghetto backs I use for my Space Goats. First of all, if there is every any question of an inch or two off from where they would normally be on a Razorback, I won't be able to fire them etc. I just wanted to do it this way so I had a ton of options I can play with, as well as give a kinda, orkified Space Goat army look that fits the beastmen look of my army. I have made Heavy Bolter top, TWL Lascannon top, TWL Assault Cannon top, as well as a regular Storm Bolter set up to let it be a rhino. 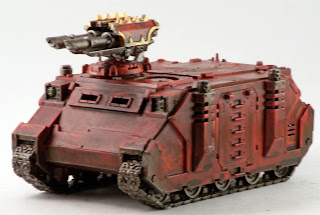 So there you have it a bunch of stuff. Here is my Lone Wolf list I plan on throwing down with. It is called Chariots a GO GO!

It is a mish mash list with lots of Chariots. I just wanted to play for fun and try out some Sorcerers on Chariots as a way to help out with some combats if they hit the flanks. Plus roaming Sorcerers can help by throwing some small spells out. Will see if I can get in some fun games versus less Magic heavy lists. If only I could take the Ring of Hotek hah.

Next week I will post my final Space Goats lists I plan on taking for each tournament at Adepticon. Fun stuff eh?
Posted by Thomas aka Goatboy at 1:50 PM 2 comments: