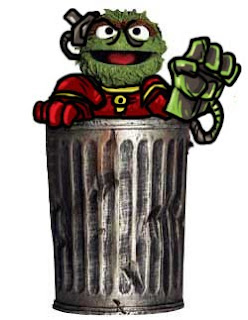 Been kinda in a holiday/tired mode so I haven't done a whole lot. I did play 3 fun games last week - which makes me feel good. It is fun to goof around and just have fun with your army instead of trying to win for whatever street cred you think you might have. It was a lot of fun and I went 1-1-1. Lost to Necrons (gasp!), tied a pink slaanesh army (oh gasp), and beat another CSM marine army (pinch and tickle). So all in all a good week and a good way to recharge the engines and bring back the idea to have fun. Mix that in with a slower output on model production and I feel a hell of lot more recharged.

So right now I want to post two lists, one of them I am currently collecting the parts for and the other is another look at Space Goats and some ways to cover the table in white skinned jerks.

Space Goats: RETURN OF THE GOAT!!!

This is a massed amount of guys build that I talked about in my BOLS post. Lots and lots of guys, rhinos to get around, a super bluff unit mixed with some good anti light armor fire from the Long Fangs. The Fangs are built this way to allow them to be ignored as their weapons are not looked at as a threat. This build lets you get a lot of fire power into rhinos and allow your Thunder Wolf Cav to get at the juicy insides pretty quickly. The Wolf Guard are there to let you survive multiple tank shocks on an objective as well as give you a need PF to hit something important. Haven't fully tested the list, as I need to make 7 more regular Grey Hunters to complete this, as well as a Rhino. The temptation is to somehow fit an LR there maybe as it will give a nice big mech option in the middle. Who knows but that is an interesting shell of the army.

Next list I plan on building is an all bike Marine list. I have been wanting one for awhile and I've decided it is time to get something different built that will let me try some different tactics.

It is an army that should be easy to get together, build some neat models and let me try out some different options besides running a super unit forward and hoping for the best. If I can move around and strike surgically at different enemy points I should be able to win out in the end. Will see if I need to add in more troops or maybe look at dropping the preds for something else. Either way, it will give me a neat marine army that should be fun to mess around with.

Alright - beyond all of that some things I have painted. Woot. 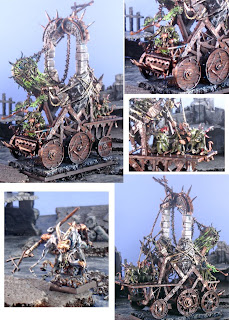 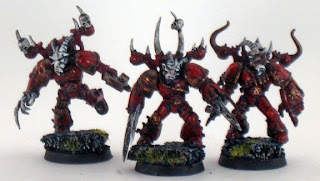 Posted by Thomas aka Goatboy at 2:11 PM 6 comments:

I did do work last week - I just didn't feel like posting stuff up. I have been in a bit of a funk lately, most likely from dealing with Holiday stuff and not liking it overall (past experiences etc). I do like Thanksgiving and food, but the one afterwards is not my cup of tea all the time. But I did do some work within the Warmachine realm, some IG stuff, as well as Space Goats thingies here and there. Fun stuff - and I am almost near filling out my Space goats to a point where I can stop building stuff for awhile (probably not as I like the scheme and overall feel of the army).

But first things, I wanted to throw some lists of what I plan on playing around with during the different tournaments coming up in the next year. First of all my current go to Space Goats list for heavy style tournaments.

Total is right under 2000 pts. I need to paint the Wolf Guard and Long fangs to finish this out. The other thought would be to drop the LRC, add in another full Grey Hunters squad, give both of them rhinos and one Wolf Guard guy with a fist or something else and run that. I think I could fit in another dog squad, but that would be another thought. Any opinions on this?

New CSM list I plan on bringing for hobby tournaments. A fluffy list designed to have fun on both sides of the table. Or so I hope.

Kharn rides with the Possessed and Bile rides with the Plague Marines. The plague Marines are designed to stay home on an objective, everything else is built to move forward and put the hurt down on guys. I add MoK on the CSM as it is a bit more fun, but MoN is pretty strong on Bile Marines. It makes them jerkface psuedo Plague Marines and a bit unfun. Thoughts on this? It is a tweak of my old Bile lists I used earlier. Less push of nonsense Oblits and more fun stuff.

Now some painting stuff. Look for a new WoC build for the post later on this week. It is a Chosen build mixed with a bit of magic and lots of fighty stuff. It should be fun, but not really competitive. Right up my alley since I obviously don't play the game of fantasy by playing an army that has to fear leadership tests. Woot. 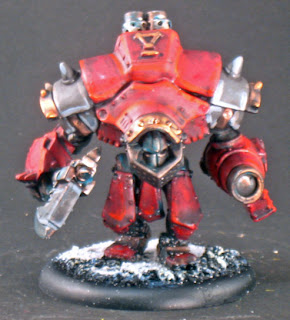 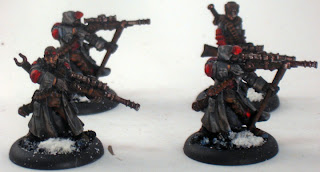 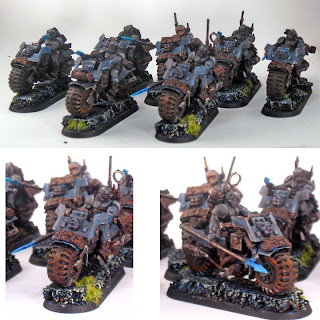 I am finishing up a lot of straggler commissions. I am hoping to get another batch of stuff done this week, which will leave me more room to finish up some other stuff too. As well as be open for some commissions. Woot.

I finished up a Canis model as well as an Iron Priest. I will probably make another Iron Priest but this will pretty much leave me done with my Space Goats. The only other things left to do is the final Grey Hunters squad and maybe some more wolf scouts to give me more options. I could always do another Thunder Wolf Cav squad too. Fun fun fun. Beyond all of this, I am looking at doing another Fantasy army as well as starting to look at my first, fully built to be sold army in the coming future. Not sure which one to do first, but will see.

I really like the LR as they give me some anti troop options. Mix this with a very strong bluff unit and you got a good chance they can survive for a bit to do some annoying crap to your opponent. I could drop one Rune Priest to go with another block of Fenris Wolves. They are Ini 5 with Canis on the table and can really put a hurt on the opponent. The Iron Priest is a true hidden gem in the codex and thanks to Stelek for pointing it out to me. Give them a try and see how annoying they can be for an opponent.

If I drop the two LR's I could add another Cave unit and another Grey Hunter Unit. I could also look at just having Njal, versus 2 Rune Priests too. I don't know if a Rhino would be needed then, but it is a thought. From there I could look at having some Wolf Guard to help beef out my Grey Hunters as well.

Here is that thought list so you can see how annoying it could be.

Might be a better list, might not. Njal is annoying and with 2 5 Man Thunder Wolf Cav running around, he should last longer then most others. It might be worth it to drop the rhinos completely and make the Grey Hunters 10 man squads. I could also look at dropping them down to 8 man squads and look at finding a way to fit in Wolf Guard guys too. A bunch of different options.

I know I am harping on Thunder Wolf Cav - but they really are good. Not broken and over powered, but in a way that lets you get a chance to out play your opponent. They cost a low enough amount, that sacrificing them to get a character into some action, as well as making your opponent worry about them, makes them really really good. Plus Cav lets you get some pretty fun charges going that feels very reminiscent of fantasy.

Look for some Skaven stuff to come as I start to look at that army next. Woot.

And some minis. The Fat Ork was built by my friend Pat. The blending didn't come out in the picture, but he is one fat sexy bastard. Drive me near someone so I can smack you wit my washin claw! 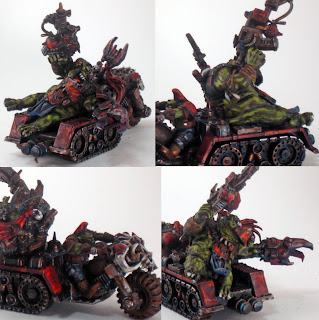 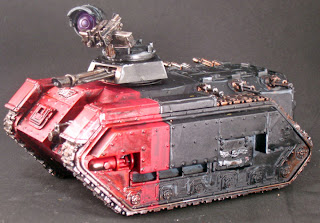 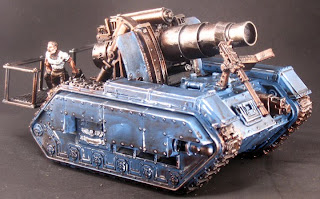 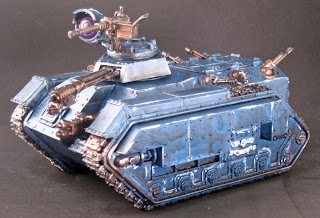