Goatboy's Sunday Post - Funtimes in Da Hoods of Round Rock 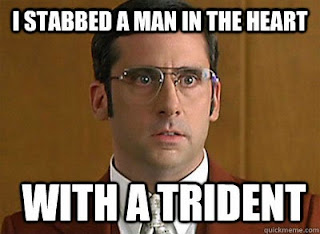 Woot - an earlier post yay!  Plus a ton of work to show yay!  You got to love that.  Lets go into the paint list - then a small battle report etc.

Paint List/Art List
Me
Finish off GK Purifier Squad #1 - halfway done with pics below - priming tonight
Might steal an idea to use the portals from AoS as my GK Drop pods - it sounds cool and would look neat.  Size wise they fit.  If not I should find some kind of portal thingie.
Finish off 5 AoS Khorne Guys to use as advertising at local shop for painting - Been wanting to paint them cuz they look cool etc.
Rogue Inq Drawing for Norm
Wesley Art X 2
Plus some more that are getting talked to me or I forgot.

Don S
More stuff from other companies but they ain't in metal so yay!

Might get some other stuff like some Batman miniatures and a Dark Angels order too.  I just will never stop painting marines.  I think another client wants some Drop Pods too. This never ends for me does it?

So yeah lots of stuff.  I actually got a game in yesterday with Nick Rose.  He is playing at Nova so he wanted to test out a mission.  I brought this pile of dumb to test out.  It worked ok with some tweaks it might actually work pretty well.

Things I learned - I am good at rolling 1's in the beginning haha.  I also learned Skill Rider passes to the squad.  I also learned that lots of special characters are super sweet.  Sammie is good - but man being Str 4 with that cool sword sucks.  It also sucks if you get hit by 2 Dread Knights.  Charging two Knights with a ton of guns sucks too.

I didn't win but my plan was just to see how the army worked.  The guns were not worth it on the Command Squad.  I am sure there will be a time when I would want them - but they just didn't help out.  I also think there was a lot of placement mistakes on the units and how I had some "extra" wounds not hidden enough to allow for the better saves to be in front.  The Chapter Master is a pain but I wonder if just having a Captain will work as he will never be low enough to loose to much with the Chain.  Plus I think I only need a few shields in the command squad and maybe less stuff.  It is a thought and I have other versions that fit in a Cent squad and less duplicates to try and fit within a Highlander set up.  Trying to think of something that is fully Highlander and still good.  Look at this idea.

That looks pretty beefy too.  I don't have much extra wounds in the star but it is all Highlander and everyone is diff haha.  Plus it looks all over the place.  I could go with a Grav Command Squad that will get 4+ FNP and 2-3+ cover saves if the Shroud is close enough.  I kinda like the Raven Wing command squad more but it is a thought.

I am waiting to see what Da Boyz will be wanting as I have that army pretty much painted beyond finding a Sammie replacement and most likely figuring out a cooler way to do fallen Dark Angels etc.

Now onto some models and calling it a day as I find some lunch. 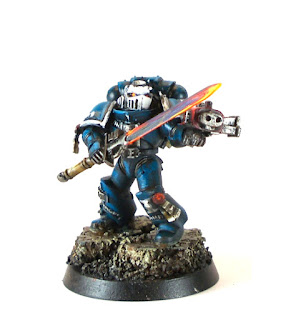 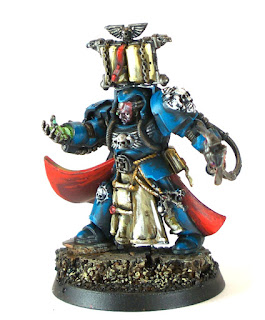 Libbie #1 - holy crap did that come out of my nose? 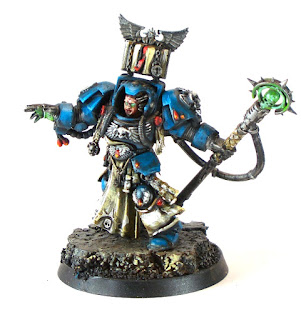 Libby two - the head is actually me haha. 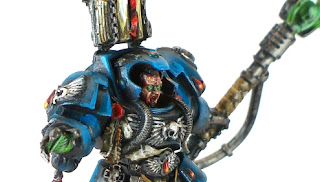 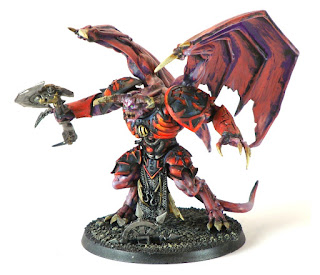 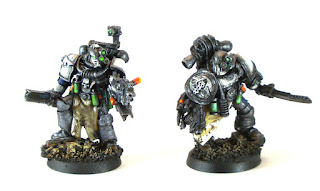 I can heal you. 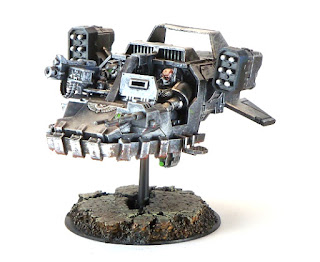 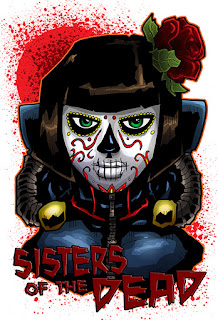 Sister of the Dead! 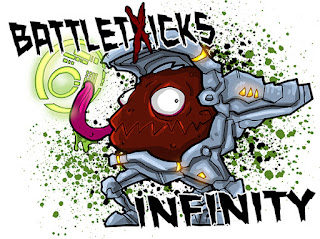 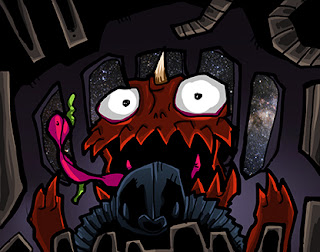 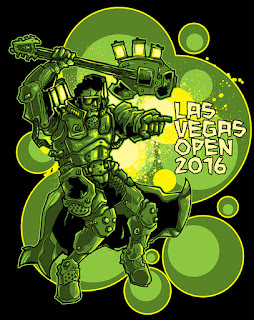 Posted by Thomas aka Goatboy at 9:56 AM 3 comments: 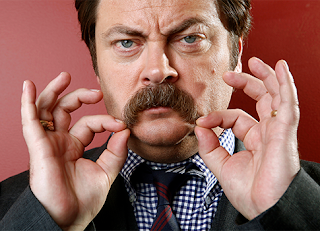 Hopefully I get time to test some more in the coming weeks.  I will miss a SATX event due to wedding anniversary.  No way I can test the waters with - babe I know its been a year with the new baby, life changes, etc - but I want to throw dice on our wedding anniversary.  We get one every year so its cool I can miss one right?  Right?  MY PLASTIC DUDESMEN NOOOO!!!!

Me
Do GK test for army down below.
Art for Whitemetal Miniatures
Art for Luis - test down below - 3 Legged Squigg
Art for LVO Warmachine stuff - got it inked have to do the guitar up better
Maybe more art for other stuff too - lots of art it seems.
Heck might have to build some more Drop Pods for a client - will see

Don S
Some Cool Mini or Not stuff

Anthony
More Chaos - a Heldrake to knock out by end of the month.

I am sure I am missing some stuff - will see.  It never fails I forget something and just machine through it.  Been wanting to write this blog post for the last few days - but work/life/other work has gotten in the way.  If you haven't figured out - I seem to like to stay busy.

Ok - some army lists I talked about.  A few I am going to play - others I am building.  It seems it is time to change up my play style a bit to get better so thus the non death star like stuff.

Right now I am on a GK kick - thinking there is some merit to a ton of nova's, cover ignoring, etc mixed with a large amount of WC dice.

I showed the initial thought build on BOLS but here is the "new" one.

I feel a little bit enh with the lack of Melta in this.  Originally I had 3 Melta units with 2 Assault squads and one Tact squad.  That might actually be better with no Dreadknights.  It does make me wonder if I should find a way to fit in an Culexius Assassin but I can throw 8+ Psyk out grenades on a Psychic death star to kill out all the casters.  With ITC allowing me to hit Invis stuff with blasts - I can do a lot of damage and remove their special casters - or farseers etc.

It seems like a decent list and again I could look at just having one Dreadknight and then find a way to get a Tri Melta Assault squad from BA - it would give me 6 Pods which could be handy to help keep purifiers out of attention from another Pod Army.  I would also love to play with Mephiston as another way to kick a knight in the dingus so there is always that.

Next rando list I want to play - hopefully in a week or so or at a small event - it won't win a big one unless I get crazy lucky.

Yeah it is dumb looking - small but maybe it will do some damage.  The plan is to Invisible the big unit and just - do bad stuff to people.  The one Libbie with Shroud is to go out and hold and objective if needed.  If you roll Invis early and then have the one try for Precog it could be fun with a Reroll 2+ shroud save.  The Ironstorm Missile Pods are there to cover more enemy troops with large blasts all over the place.  It will end up shooting a lot and might survive.  I would play it in an 3 round event or maybe an event I want to drink more at.

Here is a Dual Death Star list that is very very close to being Highlander.  This version isn't but it can be easily made if you wanted too.  You lose some doggies but add in some other characters to get more smashy smash.

You have 2 Death Stars - both are tough to remove and shoot ok.  You are weak at popping Knights beyond the hope that Str 10 (not 9 you ninnies!) crushes them before they stomp all over your dinguses.  It seems all over the place so that is why It will probably work ok.  And it has some Obj Secured.  Not at terrible list and would be something I would work on if it wasn't for that GK nonsense. 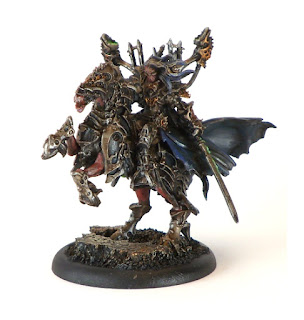 More Cryx - figured a better way to build with Greenstuff. 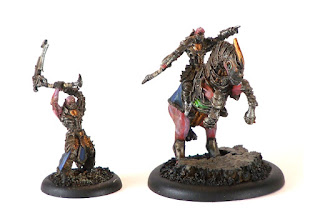 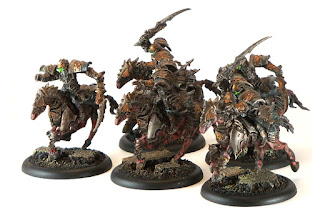 Woot we are in plastic so Goatboy stops crying. 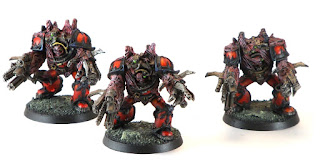 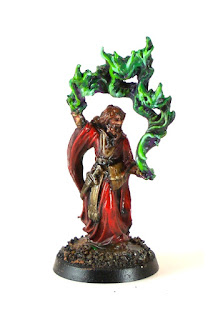 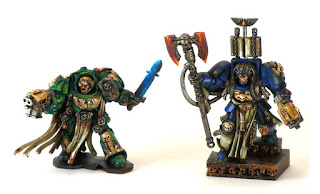 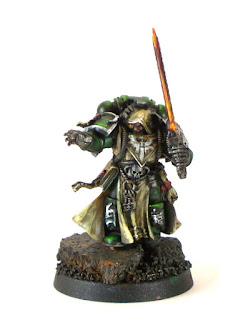 Some Dark Angels for a buddy who is now switching to GK - dammit. 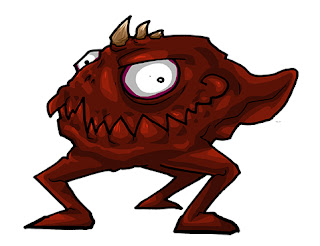 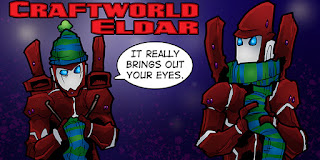 Gonna tweak this one up but liked how the art is diff then I normally do. 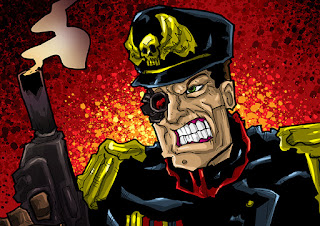 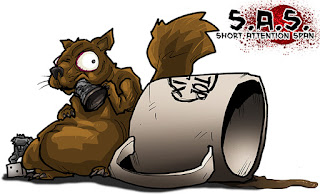 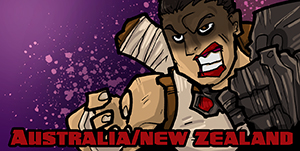 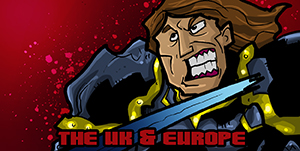 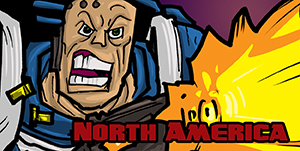