Life has been busy 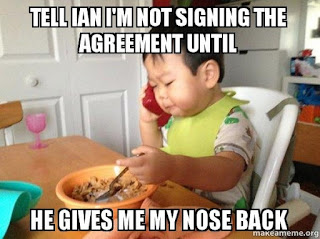 Doesn't mean I wasn't working - but I have been busy.  Did ATC, finished some paint commissions, wrote BOLS articles, tried to keep ahead at work, and went for 2 promotions which I didn't get.  So sad times but hey - I still got work so that is good right haha.

Ok - enough of that - paint stuff etc - then lots of random stuff.

ME
Frontline AOS art - got some of the groups to do
BOLS article - probably a what lists look interesting from ATC/Web
Maybe some weird conversion stuff - but it all depends on what list I plan on taking for War-games con
More art as usual.

Nick R
Finish bikers and then start on battle company

James L
Should see a Chaos army start to paint

I think that is it for now - will see I might have forgotten something.  I don't remember everything al the time haha.  I just want to knock out some stuff so it can get out of my house hehe.

List thoughts - just wrote up this dumb GK idea - I don't know if it will even work but it looks goofy.

Idea is to use the GK libbies to get Gate and teleport around since I can't ride around in drop pods anymore.  I don't know if it would even work - but it could be fun as hell.  Plus you start on the table top and get moving across the field with teleports, and other dumb tricks.  Plus you got a ton of spells you can throw.  I could just do it with a ton of terminators and use Teleport homers to get around.  Tiggie would get swapped for another Terminator guy and maybe I run Dread Knights?  Meh - trying to get GK to work damnit.

Meh - it would be goofy to see.  I guess it depends on how well you do with Sanctic powers.  It is fun to think of a few Vortex's floating around the table top.

Plus the idea with all Terminators could use Teleport homers as one guy shoots forward and you start to stack around him to cast more spells.

Right now I am currently embroiled in a Tetrad thought process.  I am looking at a Tetrad and a Burning Skyhost combo.  I don't have Warp Storm control but I have MSU and a Paradox herald which can help me control things.  I might have enough MSU to not need Paradox but this is an initial thought list.

Just shoots around the table and while it can't corrupt it will do some damage.  Plus it has Paradox to ensure summoning or something else is doable.  And there is enough guys to help control things towards the DP's etc as they fly around.  I took off the Robe on the MoT guy as I don't have Fate to control Leadership checks.  I could add it back as that guy isn't going to be throwing 5+ dice to cast summoning spells so he most likely won't get perils to fall down or die etc when he takes a wound.  It is an idea - Flyer Ace might be better as the Warlord Trait of +1 inv save and +1 to Tzeentch daemons mixed with a +1 from the flyer ace means he gets down to a 3+/2+ etc without the fear of eating it to a leadership check.  I was hoping to get a game in today but my buddy seems to have gotten busy.  It just means I can spend more time finding screamers.

ATC was a lot of fun.  The escalation table screwed me one game where I was -1 to D's, Stomps, etc vs an Iron Hands star.  It meant I couldn't kill him at all with my knights and the mission was set up to favor death stars.  Meh that was a bad loss and I had another at the hands of Geoff.  Dice went tits up for me and Geoff had the luck I had in our first game where everything came up 6's.  His army was strong too - but when the dice favors one it doesn't matter I just lay there like a noodle - letting that beastly dude wreck me hehe.

Alright models and other stuff. 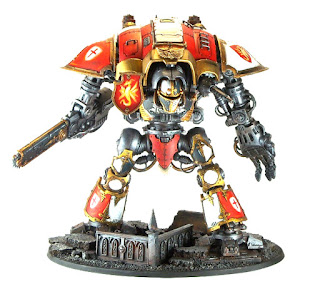 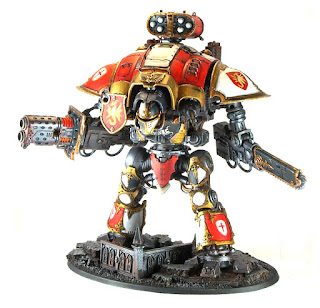 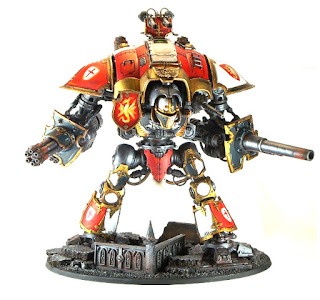 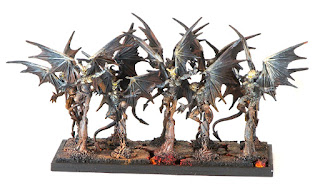 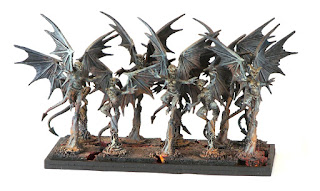 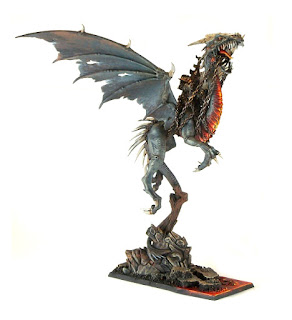 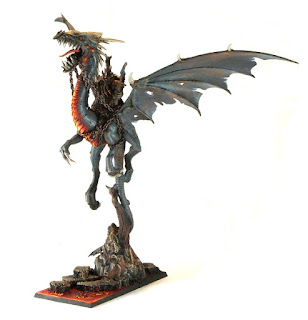 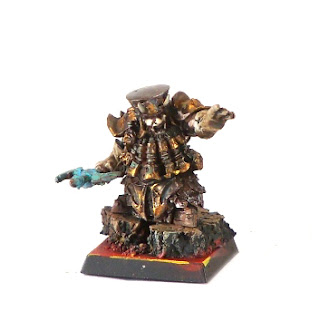 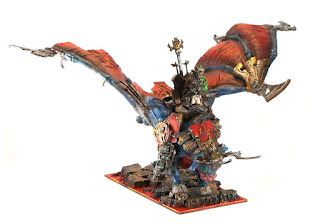 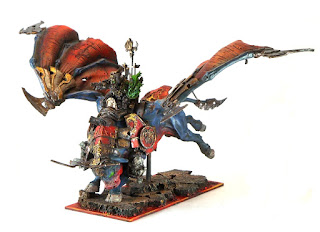 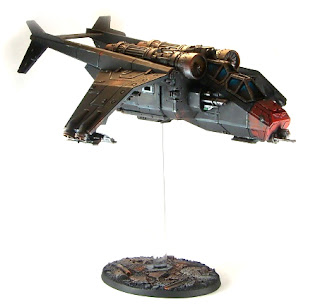 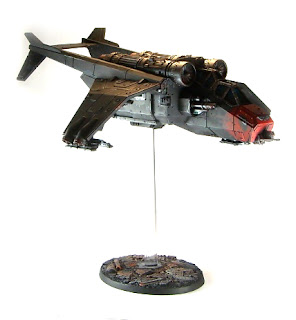 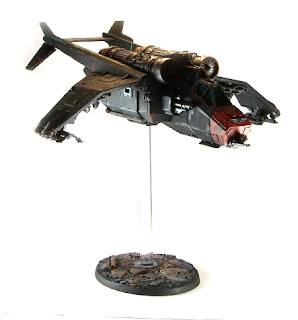 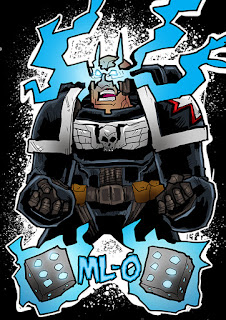 Posted by Thomas aka Goatboy at 3:41 PM No comments: 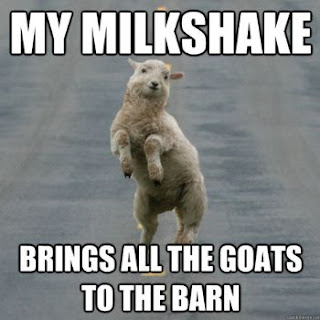 I have actually been playing weekly lately.  Practicing for ATC and basically reconfigured the list back to what I ran at Alamo and almost won it with.  I think this is the best, consistent, list I could use.  I did one small tweak - change the Furies to MoT.  This is cheaper and allows my herald of Khorne to take another lesser gift.  It gives me an extra Attack too and he becomes a marine killer.

Basically I found the double Gatling Knights were cool but the Warp Storm just went to something ok instead of something powerful.  I find with the Fate Reroll and single Dice reroll I can throw out a +1 Inv save, get some daemonettes, or even go after a caster on the other side.  The dogs help me control who hits the Knights and having access to a D Close combat attack made this set up a lot stronger.  Overall I feel confident in the list and have played 7 games with it so far and feel like I can kick butt with it.

Thus tomorrow I throw down with the Tetrad plus 2 CC knight build.  The 1850 army list shows up in my Monday article with chatter on how to make it 2000 points.  Might be testing 2000 points as War Games Con is 2000 points this year.  Seems fun and hopefully I can kick ass with 6 models on the table top.

Let's do a paint list - it is kinda all over the place the next few weeks.  I finished a FW commission that will probably move onto other stuff for  Chaos later on.  Knocked out the Space Sharks as well.

Me
Nothing really for myself -
Art wise - rework and brighten logo and do some illustration work for front signage. - should have initial logo done later on this weekend
Bols Article - written

Greg
Imperial Knight build/paint - should get worked on this week.  Got done with a FW build which leaves me open to some smaller/tough builds.  Full magnets.

Nick
3 Vendettas - need to use some of the lascannons from centurions to do the conversion - will have pics - should get them built tomorrow.
Then it is onto marines for him later on

James L
Chaos guys - got to open the box yay!

Lance
Finish off Chaos Dwarves - got 10 Gargoyles primed and ready to paint this weekend.  Will do another 10 and then have 2 big guys to finish up and one random walking guy.  Light is at the end of the tunnel haha.

If I missed anything shoot me an email to remind me.  That should cover most of it.

Let's get to some models and some art.  I knocked out some Frontline stuff for AoS. 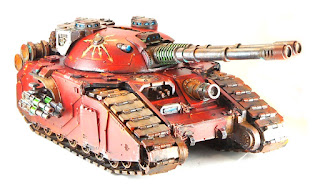 A heck of a lot funner to paint then it is to build.  I got this Red scheme down haha. 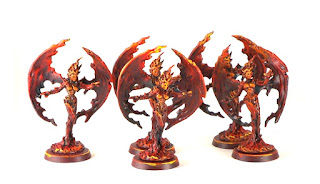 MoT furies - Reaper Bones see through Flame Daemon lady thingie.  It is weird - primer on it leaves it sticky but any reg paint is fine on top.  Annoying but these guys look decent.  Black, blues to reds. 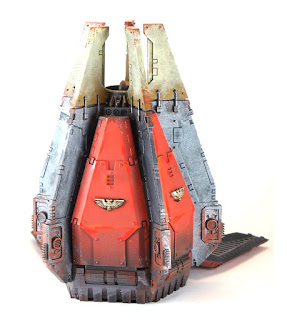 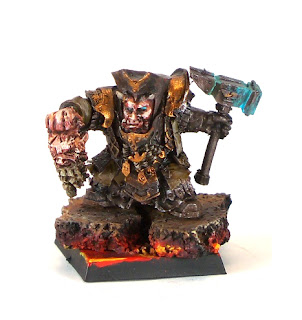 Hey - have you seen my severed head? 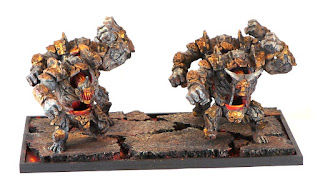 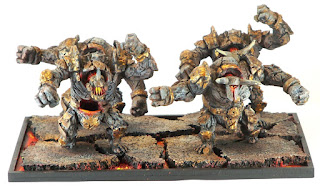 these guys are both cavities. 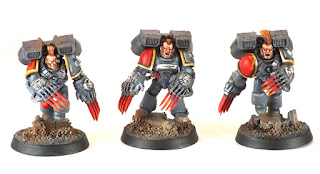 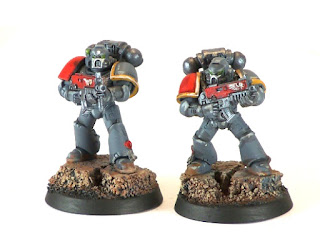 This is the last of the Space Sharks.  Yay! 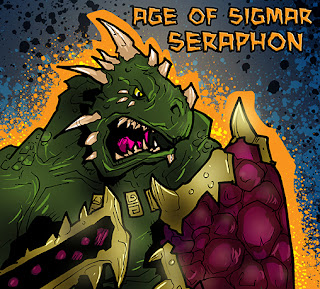 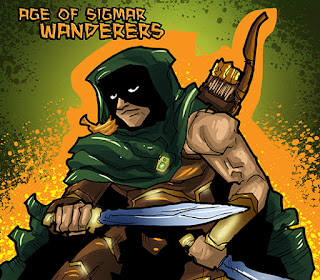 Finishing off the AoS art for Frontline Articles.