New chaos space marine list I will be messing around with tonight. Not all that competitive, but will see how 5th makes it. Might just die quickly in the first turn, but who the hell knows right.

Land Raider carries bezerkers and noise marines. It is just an army that uses lots of tanks and might be ok. I doubt it, but I will test it tonight. At least it is a true Undivided Chaos list. Will see and watch it crash and burn. Some games it just moves up and mauls, but a lot of games, with this style, it just sits there and eats it. Oh well, will see how it rolls. Or how I roll hah.

Hope to get some pics of the entire army tonight too. Will see.
Posted by Thomas aka Goatboy at 1:08 PM 5 comments:

Hey, if you are checking this out from Bell, how is it going. I usually post some art and then army lists I plan on messing with. I do play hard lists, but most of the time I would rather have fun and just have a good game. Which normally means some kind of hobby list that just lets the game be more along the lines of what the designers want. No real winners, other then the DIce gods hahahaha.

Thoughts on this, the split is initial assault 2 Plaguebearers, And Daemon Princes with Flamers and other Troops coming in for the second, with a 6 to 5 unit split. I think I can do that, since it just says split the army with the same amount of units. Plaguebearers with Icons and then Daemon Princes to move guys around. Will see, probably will be terrible, but hell it might be fun. Other changes, get rid of HQ guys and just put in a Keeper of Secrets to increase the amount of Monstrous creatures.

And now onto my modified Chaos Undivided Fist list. I wanted a CSM army that had one of each cult troop, lots of rhinos and just a very heavily moving force. Now onto the list.

The army is meant to just have a ton of movement, hard troops and a good counter assault with a unit that can move things off of objectives. How will it do in 5th edition, who knows. All I know is that is is fully painted now and should be a lot of fun. As long as people don't bust my damned Land Raider with tank hammers hahah.
Posted by Thomas aka Goatboy at 9:55 AM 4 comments:

Been really impressed with Ork Nob bikers. They seem to race into 5th edition pretty well and I feel they will be a nice rock to some of the other paper and scissor lists in the tier environment. Here is the new 2000 point list. I am still thinking and tweaking the list for 1750 and the upcoming Las Vegas GT. Look for me to be testing it in the coming weeks as I prepare and tweak out some painting and build a board for it. But first of all...

I broke my ankle this Sunday. It sucks, but it looks like I will be on crutches for 6 weeks and should have a quick recovery and be ready to smack some peeps around for the Las Vegas GT. I was riding a scooter and tried to save it from dropping and my ankle got in the way. Ankles are obviously not as tough as the scooter, so I lost. At least I can say I am part cybork now hahah.

HQ: Warboss, Power Klaw, Attack Squig, Warbike, Bosspole, Cybork Body = 150pts
Pts total : 150 x 2 = 300
This the backbone of the smack, and without these guys, this list would be impossible, or at least less effective due to the need to take different troops or wazzdakka.

Troops: Nob Bikers (10), Power Klaw (4), Cybork Body (10), Waagh Banner, Pain Boy = 650
Pts total: 645 x 2 = 1290
If the warbosses are the backbone, these are the giant stompas meaty fists of doom. I went with less power klaws, due to the fact, I don't want to overally win combats anymore. I can't smash everyone and consolidate into the next squad, so what I am going to have to do is split attacks, and try to leave one squad alive that I can say I am still locked in combat with. This way I cheese it out a bit, and I am stuck in your zone, hopefully winning the rest of the combat during my opponents assault phase. I also dropped the overall amount of PK's due to the fact, I will no longer be losing attacks with opponents pulling guys from their area of attack. This allows me to get more use of my 1 attack less PK's. Also, with the sheer amount of choppas coming down on the heads of guys, I can hopefully wrap wounds around and get to the PF in their own squad and take it out first before it can take out a nob or two. This is also why I added back in cybork body. This gives me some chance to take out PK or PF attacks. Everyone one I save, saves me a nob, and in the long run with my lack of overall troops, helps keep me in scoring longer.

Elites: Kommandos (10), Big Shoota (2), Nob, PK = 135
Pts total: 435
These are the meat in the sandwich. The annoying dudes that can come from any side and just get in the way of stuff. I went with Big shootas, due to the fact with rokkit launches, I would end up paying an extra 30 points, for a lot less chance to blow something up. I am going to be hitting the butt of a lot of vehicles, and with 9 strength 5 shots, I have a good chance of penetrating most troop based vehicles, add in the fact I can still pound out a lot of shoots into some troops (ie nids) I can get more use out of these three squads. The rule in 40k is, make them roll enough, and they will eventually fail armor saves right. Also with the PK nob, I can pull my own weight in combat pretty well and smash up some guys good. Let alone other nob bikers hehe.

But that is the test for the nob biker army at 2000 points. I think it works pretty well, with the only lists I fear are other heavy PK or PF lists. IE orks and Space Puppies. Thus the reasons for the above changes as Orks are a pretty damned popular list now, and for a good reason. But yeah, try this list out in your games and you will see how heavy it is. Turbo boost first turn, and the just start killing things aright after that. 5th edition moves your save to 3+ when you turbo boost, and hell you can always take wounds on your warboss if needed. He is pretty damned tough or so I hear heh. If they did another Hard Boyz for 40k, this list would just get meaner, with more nob bikers or other dumb things added on. Come adepticon next year, I might bring this to smash up some fat titans.

Oh and here is some art real quick. I did this last week, look for more in the coming week as I get settled back home and have to find things to do. 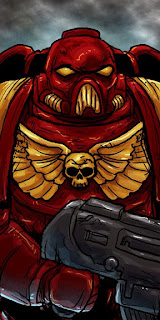