It is all painted, the serving tray, magnetic carpet ride is created, and all I need to do is figure out how to fly with this damned thing. Fun fun fun. But anyway, here is the list.

The thought is a pair of conjoined ork twins, that ripped themselves apart and survived. Due to their birth and their small legs, they went towards bikes as their means of locomotion. Grakkis has a bit of a big mek in him, thus his rather large and obnoxious bike. Morkus is more the leader, yelling and smacking his horde around. They say that these two have some kind of mental connection that lets them know what the others are doing, but most just think they are really lucky.

I will write up a little blurb for this and I just checked to make sure everything fits on the carrying tray. They do and so I am fully done. But it is looking like I am going to be working hard to finish up my friends Chaos army. Here comes some converted defilers using bits of a soul grinder and giant parts. They are going to be Slaanesh like, so expect some nipple piercing and other nonsense.

Here is another pic to check out. 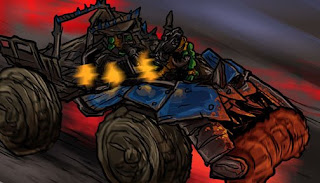 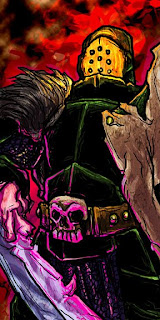 Posted by Thomas aka Goatboy at 5:52 PM

I don't know if/when you're going to be around BFG today or tomorrow, but your ass had better bring that new soul grinder if you haven't given it up yet!

Not enough lootas.
Not enough Nobz.
Too many Boyz.