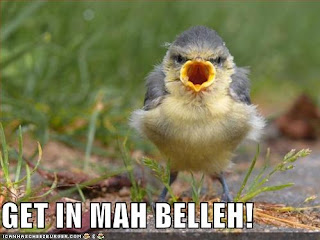 I am still thinking of my own game thoughts. It isn't going away - just life has kept me from more hashing out the thoughts. I still think I will go with a d6 system - just cause I like the feel of d6's. I play a crap ton of White Wolf stuff and D&D and just never liked the feel of D10's in my hand. I think the idea and sharpness of a square just appeals to my artistic side.

So for those just reading this - the game thoughts - Basically I want to do a Party like system - like a Role playing game - fighting another party like system. You have your "main" hero but everything else is a helper set up - with your main hero being the helper set up. Most likely with this design sense you could move beyond the player vs player with player vs monster or "adventure" design. It would most likely be a hybrid game - ala SciFi/Fantasy feel to it. I won't want to say Steampunk - but I am thinking some kind of High Tech grunge punker design for bits of it. Really want to push the customer "hero" creator type of thing that allows you a lot of freedom to make your guys. Max 10 in the party most likely so will see. It is all just a thought - with a heavy push to make a really fast game.

But yeah - so the thoughts are there and I want to work on it bad. Plus I want to do a Post Apocalyptic comic too. Might use that as the stepping off point for the game design. Interesting haha.

But enough of that for now - if that interests then cool. It could be good but I am just a gamer that has too much math in my head and not necessarily a pro game designer. We all think we can make a good game but it is still hard haha. Trying to make it easy enough to work without much fighting the "rule intentions".

Beyond that I am going to start testing this week on some Coteaz builds. I plan on creating an army that is split in the middle with the thought of a Chaos Influenced Rogue Inquisitor getting attacked by a GK strike force. That way I can create a really cool display case as well as try to make a good army that will look awesome and kick some ass. That is the thought anyway. I want to try to get this done for Feast as I have half of it (need to tweak some colors on the models I have and look at maybe creating it).

So the idea is the board would have two different effects - basing etc - that showcase this. The attack of the Elite GK army into the evil scum horde of the Rogue Inquisitor. I did a test Inquisitor last night. 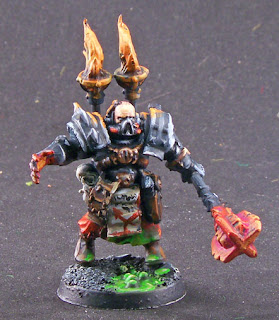 Will see if this list works. Might tweak the Paladins to a big fat 10 man GKT squad so who knows. I do think it will look cool on the table top. So will see. It might be fun too - which is always good haha. I think it has enough Goatboy crap to make it worth wile.

But yeah - that is my initial thoughts. Want to make some stuff that looks a bit nutty - and try out my new paint technique for some vehicles and other options. Heck maybe get a better paint score haha.

So far this week I have done some things so all is good. I have more things to do but I should be on time. I think I am hitting a water park this Saturday just cuz. It sounds like fun and I been dying to hit some slides.

I will post more Ard Boyz tweak thoughts later on - I think I might have some new options for my Round 2 army of doom.

Posted by Thomas aka Goatboy at 11:01 AM

Hey thomas I really like that list a lot. It has a unique theme and I like how the two sides play off against each other. Pretty darn cool .

I assume you mean Coteaz not Crowe btw?