Woohoo Writing this before I crash out 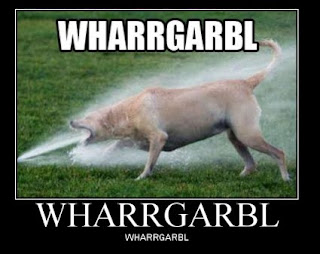 Blargh - another week and more minis painted. Lots of neat stuff to do. I have been experimenting with NMM and hopefully I can figure out some other uses for it as I delve into actual metal in NMM to see if I can find the happy medium I enjoy. I like how I got the gold but need to find a good way to do the silver. Maybe more blue?

Anyway beyond that I keep coming up with more Grey Knights lists for Ard Boyz. Won't post them yet as I still have some thoughts. I think I am going with a base of the build I took to the Alamo and won overall with but will see. No crazy Inquisitor tricks as I just don't feel it is worth it. Just straight up Knight with Knife in Face action. How tired is everyone about talking about Grey Knights eh?

I wrote out a Thunder Wolves list that I think would be a decent Ard Boyz play list. It is tempting to bring this as it has the sheer brute force I like for the simple missions. I posted it on another blog but here it is again.

Mean, lean and just plain aggressive. It should give most lists fits as the Trio of ass kickary gets close and ready to Dance Punch their way to freedom. And hell 50 troops is pretty dang sweet!

Beyond that I want to tweak out my Iron Warriors a bit too. Probably take Meph and Sanguinor for some kind of idiotic beat down machine. I don't think I have to paint anything else other then losing out on my Furioso Librarian - Mr. Stabby Stab. It still has 5 Dreads in it though and I can go around punching things and flying around and stuff. That is always fun. It is something like -

Something like that sits at 2000 points I think. Don't want to open Army Builder so I might be wrong. I think the Priest might not have a spec weapon but who the hell knows. That is my initial thought. It should be fun, punchy, and just plain neat to play with. The army is painted too so hooray beer.

Oh yeah I am still thinking of the mini game. I still want to go with D6's because it just feels right. I played too many years of Vampire and find the d10's to be annoying. I just don't like the shape for some reason. But more thoughts I hope later on this week.

Now onto a paint week. I am finishing a ton of stuff up and getting some commissions out of my house damnit.

Me
Thawn - Finished Today - Pics below! - I went with a design that incorporates how crazy he should be living through all the stuff he has. I mean it has got to hurt right.
New Crowe - Built and needing to be primed
Tweak one Terminator with a Warding Stave - Need to cut and glue.

Not an insane week but still I should get a lot of it done. That is my hope anyway. Now onto some pics. 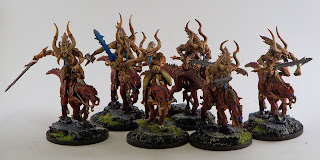 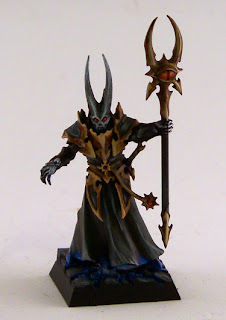 Posted by Thomas aka Goatboy at 10:05 PM

Looks good! I find mixing TMM and NMM together on a mini looks great also.

haha, I tried your alternate wolfstar list the other day. It was fun- I ended up winning against a Draigo/Libby/Paladin Deathstar, but the rest of the fight was pretty brutal, and I actually got a little lucky to win instead of draw.

Probably not the best army to test against because of the deathstar nature of the other army, but it made me nervous enough to hesitate in buying the wolves, and now I have to play my old list instead. Which is actually still pretty solid, in my *not so* humble opinion. :-p

Is that Blood Angel army what you're taking to the Feast?

Not right now - still thinking Grey Knights but you never know. I constantly change and redo lists all the time. It keeps me painting haha.

Yeah - that star is a funky one and the paladins are always a pain in the ass due to the nature of massive auto killing hits. Fucking blows! Bastards!

I am bringung my top secret GK list to the Ard Boyz. I have destroyed IG while playtesting the list... yes I outshot thoes shooty whoes !!