As some of you have seen, I have started to play WarMarchine. I will always still play 40k but sometimes I just want to dip my toes into something new and try it out. I played a game in MK 1 a year or so ago and found it alright. The metal models really turned me off as well as the sheer lack of customization involved within the actual models/game itself. With the coming of MK II and plastic minis I decided it is time for me to start up something new and give it a shot. And let me tell you it was pretty fun.

What I like about it, is that it gives me the whole combo feeling I used to get in Magic, but mixed with miniatures and things I can in a sense create. Plus I like the fact that everyone has something cheatie in there armies, creating an environment of cool things that happen. Also the game is designed with tournaments in mind and the whole thought of competitive gaming. So yeah - I am playing WarMachine. I think the lack luster Beastmen army and the upcoming Blood Angels have left me kinda in a lurch with doing anything new GW related. Will see if finishing up my own Nids will get me going again. Or maybe the new flying super tank will make me want to throw more then 4 dice on the table :). 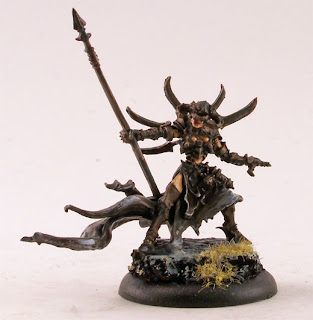 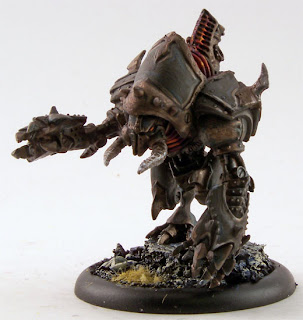 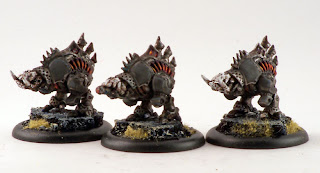 Fun stuff even though most of the models are metal. I am hoping with the coming age of plastics for WarMachine we will see more kits full of dead dinosaur goodness.

So beyond this - I also have another questions - I keep thinking of rules that could be neat for CSM. Would people be interested in seeing what random stuff I come up with while walking my dog? Just fun stuff that I strive to keep balanced within the confines of the current rules. Thoughts?
Posted by Thomas aka Goatboy at 11:01 PM

Yeah, let's see what your mind cooks up for CSM.