I got my final list.  It has some tricks and brute force aspects to it.  Beyond that - I will most likely be messing with CSM & Demons for the next few months until after Adepticon.  It should be a lot of fun.  The rumors are sounding insane and I can't wait to throw down with the gibbering horde.  And it will be a horde army if done right.  It will make Nids feel kind of sad though.

With that - let's look at the list for this weekend.  I packed it up already so it won't be changing for the weekend.  Will see how nutty it works.  The event is the Railhead Rumble.

It has the brute force of 5 flyers, anti horde with the DP, flamers to remove hidden assholes, and some teleport tricks to get line breaker if needed.  Typhus is my Warlord due to the nature of hiding him to keep from losing it.  The Daemon Prince will be dead most games.

I went with Commlinks because the event is known to have big terrain and I haven't had much luck with the quad gun.  It dies first turn if it is a threat and if it isn't it is kind of worthless.  Plus you can terrain lock it if you are a dick.  Plus with 4 Reserve rolls it will help to make it or at least try to turn it off for a turn if need be.

So yeah - will see how it works.  It at least looks alright with only a few off models in the mix.  I think  I am just waiting for Demons.

I have 30 new Horrors, 9 Screamers, and some DP's.  I kind of want to look at the new Greater Demons as I think they will be helpful.  It all depends on what we end up finding to be good.  I have a feeling I will be buy a ton more plastic demons.  Jerks!

Some painted models to look at as well. 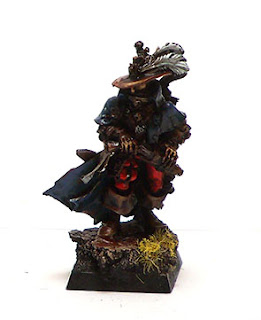 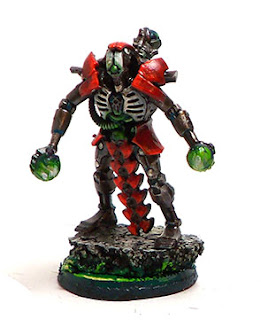 My other Cryptek.  The Teleport guy.

Look for lots more to chat about with Demons coming out.  Woohoo!

Posted by Thomas aka Goatboy at 10:01 PM

I love that Cryptek... The Res Orbs are bad ass !!