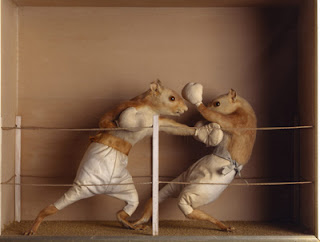 This week I took a bit of a break as I plan on starting up heavy again this weekend.  40+ bases will do that to you and make you just want to breath a bit.  This week will see me send out stuff, get other things done, and wait on some new pieces to come in.  Fun times indeed.

I played a tournament this past weekend and ended up taking it in the end.  I won all 3 games and had a nice high paint score to push me ahead of some of the scoring issues from the first round.  Too many points to get and it does leave you with too much of hole to dig out of and get towards the top even though you win.  Of course this is the argument for w/l/d but when you only have a 3 round event with 20 people you can't do it that way.  It is the constant battle between the events and personally I like a well designed Tournament utilizing limiting factors on the battle point front.  It is just me.  We are working on it and will get it right for the next wargames con.

So with that - let's go over my games.  The event was 1850 and the missions were combos of the book missions.  Here is the list I brought - it is not a nice list and next event it will be toned down.  You will see in my reports etc.

Rd 1 - Joe from Killeen with a Marine Biker army.  2 Blobs of biker marines as troops, Librarian on a bike, Razorback with combat squad tactical squad, 2 3 man groups of Attack bikes, the Captain had a Relic blade with storm shield, and a Storm Talon.

Mission - Emperor's Will (2 objectives), Big Guns never Tire - 6 Objectives - Set up was the Triangle one

Joe is from Killeen which is not too far from Texas.  Nice guy with a really nicely painted Dark Angels style marine army.  He didn't want to play DA yet as he doesn't have all the models painted.  He took the first turn and shot up some orks.  I tried to get a DP into his Librarian bike unit, he failed his charge and was sitting on 3 wounds.  Shooting didn't kill him but the assault took off his last wound.  I killed 5 Bikers before hand but I took the last krak grenade in the gonads.  I killed the rest of his army with 3 dragons and the other DP went ahead and started chewing through his bike squads.  The fat end of my army is hard to get rid of especially when you take a few turns to remove dragons and Demon Princes.  I lost a Demon Prince (Black Mace), some orks, and a squad of Cultists who got flamed by the avenger and ran off the table.

Points to me - 15 - Line Breaker, Kill the Warlord, Emperors Will, 3 Objectives - Set up was Dawn of War

Rd 2 - Kevin - local guy who has a cool dragon conversion as well. He was playing Chaos with 2 Chaos lords - one MoN with Lit Claw and Powerfist and the other MoK on a Juggernaut with bits.  He had two biker squads with them, 2 Maulerfiends, 2 10 Man Cultists, Plague Marines with a rhino and 2 regular Marine squads with rhinos.  And a dragon as well.

I won this one by a lot and it all came down to Kevin's inability to kill a Demon prince camping on one of his 3 point objectives.  I had the 4 point one on my side and the fat butted orks to hold it.  I stuffed his bikers a bit and just kept him from getting into my squishy orks.  His dragon took awhile to down but mine all lived and flew around the table causing problems.  One DP ate it to his juggernaut lord who then died to Shootas.  His other lord didn't survive the constant shooting as he tried to engage. A Maulerfiend survived a squad of Lootas shooting at him, more missiles and a failed assault to get in and start chewing up orks.  It is one of the better things that ork do with holding on and keep fearless.  Unless the enemy has a massive amount of attacks you will be there awhile.  I left Kevin with the Mauler fiend, 1 Plague marine, and 10 Chaos Marines.  I lost some orks, Lootas (failed bait), and a Demon Prince (Brand one).

Rd 3 - Tim - Killeen guy with Necron Flying circus.  5 Scythes w/ Gauss Immortals(?), 2 Doom Scythes, Destroyer Lord, Immotek, Chrono Crpytek, and 4 Wraiths (maybe 5).  This was a mean list and the joke was I should play him with my flyers.

Mission - Relic and Emperor's will - Set up was the Football field one.

Tim had a nicely painted Necron army and it was a brutal list.  I set up in a building with Lootas and cannons and just had to wait for him to come through.  I went first which hurt as it mean his flyers were going to respond to me.  He killed all my dragons and one DP (Brand) but I was able to slowly whittle him down and use my Black Mace DP (shrouding is hot in fortified terrain) to eat his units near his Emperor's will token.  I got lucky getting wounds through his Destroyer Lord and taking him out when he got into the ork blob holding the Relic.  I took it back after killing his guys and held on to it in the end.  I think I only killed a few Scythes but got rid of all but one Cryptek as his troops and killed both Warlords.

I ended up winning the event by having a fully painted army.  The top table did not have fully painted options (one guy is in law school so no time and the other is a Golden Demon quality painter - so not enough time to finish all of it) so I was able to get ahead to win in the end.  I was like 5 to 6 points ahead of them with my paint score.  I got a new Chaos Lord model from WoC (painted down below too).

My thoughts on the army?  It was not a "fun" army to play against and not too exciting to play.  I didn't have to think a lot most of the time and even though I made mistakes with my DP's I still was able to pull out ahead with my dragon domination and my ability to not be shaken off my base.  There is some good out of this list but I don't think I will throw down with it again.  It met too many bad criteria for a good fun list to be worth wile.  So back to the idea side to think what might be interesting.  I still want to play with Typhus so will see.

New listish idea - Want to utilize some of the thoughts into creating something a bit more - interesting Ork list I want to play with.  Who knows but it should give problems to Cron Air.  Dragon spam might be bad - but really it takes while to remove all those guys.  The change to Warpheads allow me to teleport sometimes which is good to get Line Breaker as my end will be very hard to remove.

Sits at 1850 and it should give a lot of these armies some issues. Dragons will have a hard time to get close to kill the Lootas - and I will make sure to spread out.  I have enough firepower to hopefully hit a few times - plus the Dakkajets can remove them from the air with a few calls of the Waagh.  The Warpheads can shoot across the table top too.

Now of course my DP army will hurt it as a Black Mace DP - who gets involved with my army - will kill it.  I have a nutty Chaos Spawn army that would love to play this as it isn't too hard to get those things mixed in with orks and just causing a crap ton of death.  That is probably the army I like to play with the most as it has a lot of goofy interactions with different lists.  Plus it is fast.  Hell here it is as I like to play it.

I have some Anti Flyer nonsense - a Dragon, and two hard rocks coming at you to get into your business and cause problems.  They should hit by Turn 2 and most opponents won't be too happy.  I might drop the Plague marines for some other bits to shore up some stuff - but this might be ok?

I keep wanting to use Bikes but can't find a way to fit them.  I could drop the MoN Spawn (they look cool) and get some bikers in there.  It might not be terrible as they are pretty annoying with a better armor save but the 3 wound Spawn are just a pain in the ass to deal with. The only thing I might try to find room for is a Powerfist on the MoN chaos lord as it will give me an out versus Destroyer Lords etc.

I could take the list above and add in Crons instead of orks as well.  It would be pretty mean but I worry about dropping out due to Drop pods and other nonsense.  Still it isn't a terrible thought.  Horde seems to be a good key to ruining some of these power builds - so make sure you prepare.  It might take me 30 minutes to set up but I will finish my turns so fast it will hurt your brain hehe.  And when I roll 18 dice per jet you will be like - How many shots do they get?

Enough of that crap - lets look at my paint list

Me
Chaos lord dude - Done!
Plastic Dudesmen - Drawn - even have 2 drawn - second one I think is pretty funny - first is another intro strip.
Draw some Punk rock chick stuff - Need to get my ass working on it
Plus I need to ship stuff too.

Luis
More DA stuff - more is coming in so will see if they come in time this week to get started.  I did Ezekial below and I will have some stragglers to add to a shipment to Chile.

That is it for now - waiting on a Paypal payment to go through and then I can order a Dakkajet to do asap.  I like painting them so it will be fun.  It doesn't look like a big week but I am sure that will change as I paint stuff.  I need to study up some stuff for a job interview so that will take some of my time.  A lot of it most likely.  Woohoo!

And now a small batch of models. 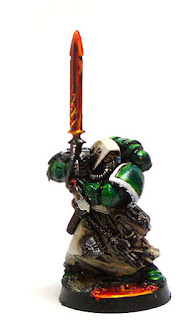 Luis's DA who are in a grimy Lava World.  I finally found this model after looking for it in the minis he has sent me. 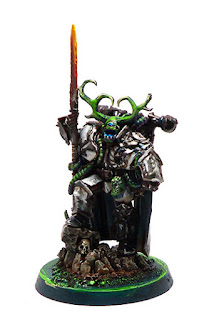 The Hunter for my Campaign we are locally playing.  I will end up using him as another Terminator MoN sorcerer for an Army I want to start playing.  Straight CSM. 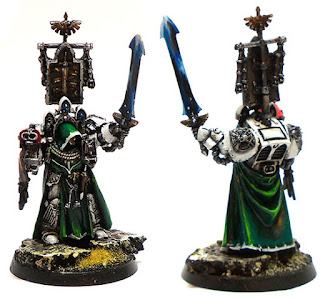 Posted by Thomas aka Goatboy at 2:54 PM

Reading that army list made me throw up in my mouth a little.

That shooty ork list you posted is a real PITA. Keep in mind old Zog is BS0. He got nerfed in the newly revised ork FAQ too.

When you posted your army and pictures last week I was rooting for you to win the tournament...glad my lack of painting time could help out with that ;)
-Nick W.

His ability to kill annoy IC's is pretty handy.

But he won't be shooting with the blast hopefully as that is the only thing affected by his BS0. Everything else works out alright etc.

Plus turning Abbadon into a squig is pretty funny.