Woohoo another week of fun 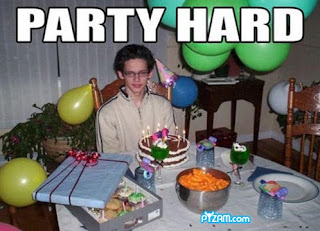 My birthday was last week Thursday. 33 years old. I had a dinner thing on Friday at a Japanese steakhouse. I drank some Saki, ate some food, and then went to another bar later. Had an evil thing called a Red Headed Mexican. It was a Margarita, with some Sangria, and a Sol mini beer in it. Suffice to say I was tipsy and glad my wonderful wife was my driver home. All in all a fun time which means very little "paint" time I would normally have to throw into it. Plus it has been raining all weekend so I didn't have time to spray anything.

I did get to play 5 games this weekend with my Daemons. I bought some new dice that obviously didn't like the Daemon army at all. I played JWolf with Khan Marines. Bad loss there where Jon didn't have to do anything as I was all about killing my army with my dice. I then played Chris and his Dark Eldar I painted. The white army of doom. I lost 8 to 7 kill points. So an odd one as I hit with Bolt of Tzeentch and watched as I rolled a 1 all the time. Then I played some Tyranids from Mike A and won this game. I played 2 more today against the same army and won the first game and was too aggressive the second game and lost. Still good to get games in with the same army as it lets me feel better about playing it. I still hate the Seekers of Slaanesh more and more and dropped them from the last two games. Current list 1.

Not sure if Daemon Princes are better at the Heavy. It is something to think about for sure. I think it might be but I really get sad when I have to make 6+ poison saves on my Daemon Princes.

The new Death Wing army seems neat especially with all the crazy 3+ inv saves it can throw down. I do think Horde Marines might be another "metagame" army that will be interesting for Adepticon. Especially how Calgar is now and how much he can just mess up a game. You have to kill the entire army to work and this is something to think about. I have some list ideas so will see. I will post them later.

Me, Myself and I
Razorback/Rhino for WB - On Sprue
2nd Troop Squad for WB - In Pieces
5 WB Biker/Horsemen - In Pieces

So that is my list of stuff to do. Here are some things I painted this week too. Woohoo! 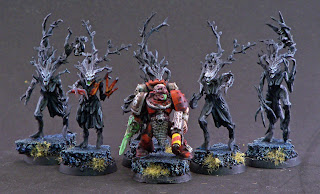 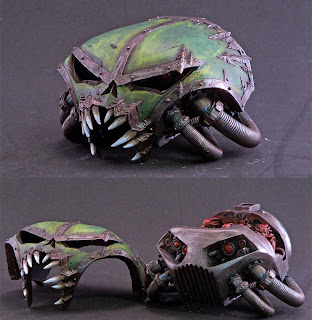 Posted by Thomas aka Goatboy at 9:04 PM