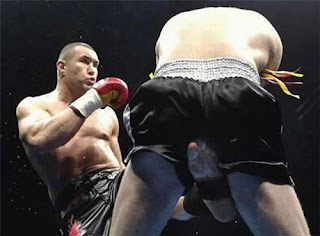 But still not 100% awesome. But that is life in the allergy capital of Texas. Woohoo love that Cedar. So this post is just a quick update of what I'm thinking of doing this week. I would be doing more but currently waiting on projects to get built, have the paint fall off, or just get my brain in the right mindset. So will see if more gets added on my - what the hell I finished this week post on Friday at my painting site. Woohoo!

Word Bearers - one more unit to get finished. Currently on the block
Rhino/Razorback - its a rhino in the list - but I made both cuz that is how I am - Picture below as it was done Today!
7 Man Grey Hunters - Built and Primed
1 Wolf Guard/Combi-Plasma Guy - Built and Primed

And that finishes that army - I plan on playing it this year and then hopefully selling it.

Luis P - Necromunda stuff
11 Redemptionists or something - Built and Primed

Adriano
Reaver Titan Legs - get them finished and other pieces. The screw is holding the legs in place so it is onto me to finish the basing and painting. Should be awesome!

And that is about it. I don't know what else beyond some art stuff I plan on doing. I should be getting my Storm Ravens the next week so look for goat like ones of those. I will probably get a Dreadnought also to complete my desire to have a robot army of doom. ROBOTS!!! RARGH!!!

Will post some lists for some counts as armies I got brewing in my head. I have been doing some hazard lines on my Word Bearers so it is making me want to do a Iron Warriors build that has lots and lots of robots. Either it means a Marine build out or Blood Angels build out. The idea of fully robot guys who are the "death" company sounds pretty dang cool. Crazy kill robots :). Mix that with some Assault Cannon dreads and we might get a cool - super firepower idea. No Blood Chalice stuff as it just doesn't fit - so it might be a regular marine army. In fact I bet that will just be a cooler look too as it isn't one of the new "IT" books. Thoughts on that? Will write up some lists as I just think the army with massed dreads will look neat. Still might have to be BA - but will see.

Oh in an upcoming BOLS video I finally win a game. Woohoo - Daemons VS. IG. I took an unoptimized Daemon lists (Look at Brent's Strictly Average for what I feel is the best) and still beat up on an meh IG list from the Crazy Red Prat- prat - funny hat wearing dudes. 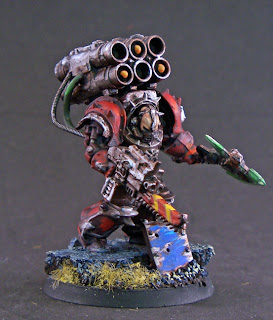 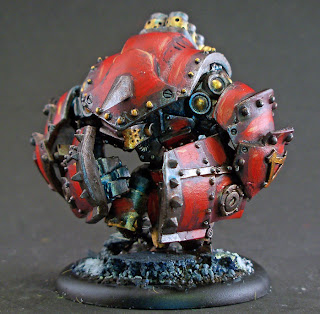 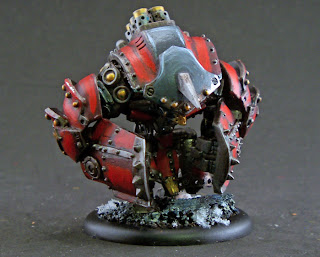 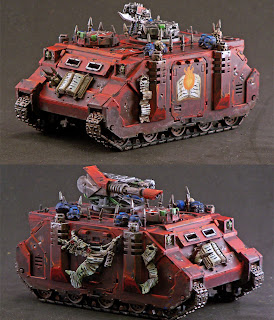 Posted by Thomas aka Goatboy at 9:44 PM

Nicely done with the havok launcher, Goat. Just to be clear are you doing half the army in Pre-Heresy Colors and Half in Post Heresy?

Yes - the "Wolf guard" have converted with a few other guys to create a kinda mixed force. It should look neat on the table top :).

The Havoc termie WG is awesome bro !! Great stuff there for sure.

I think yuo are doing an excellent job with those word bearers.