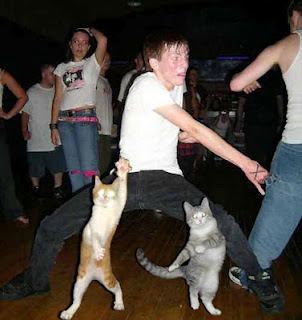 Got a game with Darkwynn this weekend. He won due to secondary objectives. I might have tied but forgot to roll Reanimation protocols. The list I played is a mix on the one I posted on BOLS. Love how people just hate it.

I played against Darkwynn's Eldar/Tau army and there was a lot of wonky dice rolling. Coteaz made 30 saves during one War Walker shoot fest. I also shot a lot at his Bastion with Dar Reapers at the top for awhile and the Exarch stayed around way to long. I think I did 30+ wounds to him as well and he made a crap ton of saves.

We ended up with him winning on Secondary Objectives. I couldn't keep a Warrior alive with Reanimation Protocols to save my life hah. But still - I shot a lot and made some nutty saves. If he didn't have that laser beam to shoot my Night Scythes down I would have flown around the board dakka dakka things all over the place.

The Terminators were poop this game. I just feel I need more guys and need to find some blob ideas. IG could always do good but I am liking Orks. I could go in two directions with them - either 60 boyz and a Big Mek or some Nob bikerz. I am leaning towards a bunch of boyz as that is a lot of dudes to get through as the Wraiths and shootie bits move around. I will be messing with this next.

This is the worst though - as it means I have to buy like 200 bucks in Wraiths. Or I could try to convert them up as well. I just like how the new models look and it isn't like the conversions will be any cheaper.

Paint List
Me
Big Mek Design - In Pieces
Plastic Dudesmen - I need to get a new one done
Random Thunder Wolf Rider thing - Done!
Write Monday Article - no ideas yet
Write Article about bases - Slowly building it up. 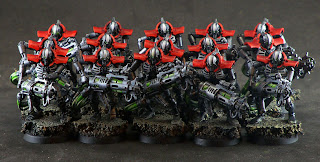 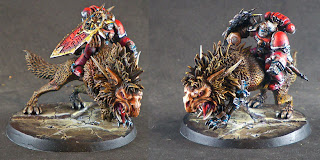 The Head is a Manticore head from the plastic Kit. Somehow it fit on the Wolf Body pretty easily with very little gap filling.

Posted by Thomas aka Goatboy at 7:20 AM

The Albino Orks are just the coolest thing going - awesome!

When do I get a Sadness Doughnut T? :)

Thomas, Are you going to be making an appearance at Da Boyz this year?