What is going to go up here? Well tournament reports, game reports, and other random thoughts on the game Warhammer 40k by Games Workshop.

First post is the tournament report from Ninja Pirate games on Dec 16th. It was Warhammer 40k, 2000 pts, and I decided to play my Big Bug list. For those wondering, here is what I played.

Impressions about this army. Probably the most consistent army in the entire game. It fires an insane amount of shots and wounds a ton. That makes it extremely dangerous. Add in the best assault unit in the game with a large threat range, and it makes this army really tough to deal with. The foils to this army, Stealer Rush. In bug on bug fights, whoever has more stealers usually wins. The big bugs don't matter then, since their shooting isn't that effective against the other big bugs, due to the less chance to wound. This is the first army I built coming back to 40k. I built it for tournament play, and rarely take it out. It isn't the most fun to play against.

Onto the tournament.
Thoughts on the tournament. Well run and a lot of fun. Everyone I played was a great opponent. I got to play some new people and had a good time. Who went first was based off of the strategy rating. As you can see, I played Nids so I never won the die roll to go first. Hooray strategy 1. It is the awesome. Anyway onto the fights. 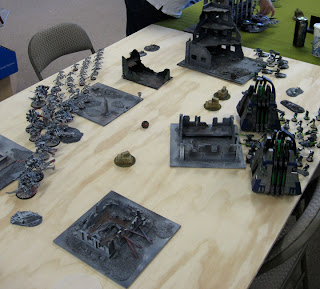 Round 1 versus Jay. He was playing Necrons, 2 Lithes, some dudes and some destroyers. 1 lord with res orb, another with a destroyer body based off a converted Talos. Nice looking model. Of course he went first and threw some wounds on a carnifex. In this game, the stealers were worthless and the big bugs just chomped down on the necrons with lots and lots of fire. I killed off complete squads so they couldn't come back. I ended up phasing him out at the end. Good game and a great looking army from Jay. Venom cannons and barbed stranglers sucked donkey. I think I got 2 hits out of barbed stranglers and maybe 4 hits from Venom cannons all game. Woot! 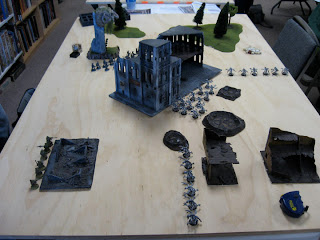 Round 2 vs Robert playing Eldar. We both got boned on this one, escalation. As you can see, a ton of Genestealers vs some Dire Avengers. This game went poorly for Robert and the reserve rolls pretty much hosed him. I got most of my stuff out on Turn 2, while his Farseer and other things took way to long to come out. His Harlequinns did do some damage and took down 4 Carnifexes. I ended up having 2 full Hive Tyrant Squads left, with one fex to his Farseer, Falcon without a big laser, and a War Walker squad with one immobilized. If it wasn't Escalation the game would have been closer due to the Harlies beating the crap out of any huge bug. Venoms cannons and barbed Stranglers were not as sucky as game 1, but still not normal. 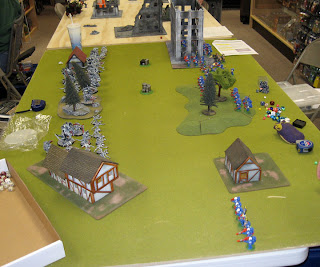 Round 3 vs Frank and I would consider this a grudge battle from the last time we played in the Horus Hersey. He put a hurting on my bugs due to only having the HQ and troops in play, with everything else coming out on random board edges. This was another fun game and I pulled this one out barely. I played kinda dumb by running some guys over to his HQ that was pushed out the side. I still won though, and the Genestealers did ok. The big winners here were the Dakka Fexes and Dakka Tyrants. Venom cannons and barbed stranglers were alright in this game. Nothing to write home about, but they did kill some stuff.

I ended up winning first with Frank coming in Second and Robert coming in Third. Woot, I beat the first and second to seal me the first place win :). Good games all around and the tournament was run very well. I ended up taking home 60 bucks worth of store credit, and grabbed another box of Chaos Marines and a box of Chaos Spawn. I need to make another Demon Prince for my Slaneesh Army. I am tempted by the alien nature of the Eldar. Will see what other army I will move onto next. I have a bunch of Orks, so obviously I will do that, but 120+ models is a ton to paint. Blargh... Later this week, Chaos army pics with army lists.
Posted by Thomas aka Goatboy at 6:42 AM

Hi, this is Frank

The barbed strangles from the dakkafexes actually is a lot of damage early on since they hit a lot and when my guys were bunched up.

You probably don't remember it as well because they started misfiring late in the game and my units were more spread out later in the game.

Still, the MVPs were definitely the dakkaTyrants that unleashed a world of hurt.

Setting up the HQ as bait was deliberate, but it didn't hurt you because it underperformed badly.

It should have taken out the 'stealers before they got into cc and then died noisily to the HQ while keeping it away from the objectives.

I learned a lot from that game, I'm not used to seeing a "stand and shoot" bug army and it showed.

I should have been much more aggressive once it became painfully obvious that your fexes weren't going to trundle over to my lines to die to my counter assault units.

I have to start thinking in terms of lanes of fire vs. assault range.

But just wait for next time...

Yeah, they performed so badly throughout the tournament. The only real good thing they did, was absorbed a lot of fire hahaha. I didn't face very many vehicles so they were not as great as the dakka fexes which ended up causing a lot more wounds etc. It almost makes it worth it to run 4 dakka fexes, one stronger then the other 3, but I don't think that is worth it. Will see.

But yeah, your HQ not killing those last 3 genestealers didn't help. I think the Grey Knights should have been out front, absorbing fire since their 2+ save and high threat value would have probably made me want to shoot them alot, and leave some of your squads.

But hell, we will have to play again heh. Next tournie will probably be Chaos.

I haven't figured out how do PMs through Blogger yet, so here are the linke to the two LiveJournal I mentioned last night.

The pics from the Horus Heresy game are here:

The pics from the Ninja Pirate tournament are here: