I play Jason, or Bushido Red Panda last night at Ninja Pirate. He was nice enough to lend me 4 more Land Raiders to test out my Land Raider-a-go-go list. The actual list is down below, and from the game I really need to add power fists to the Khorne Bezerkers. But here is the picture, previewing the death. He brought a Mech IG army. My Land Raiders were tremblin with all the evil ordinance coming at my possessed armored hulls. 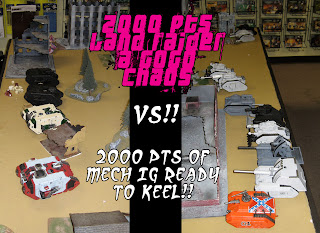 And another picture of the entire table set up. One Demon Prince was on each side to fly up and have a good time. 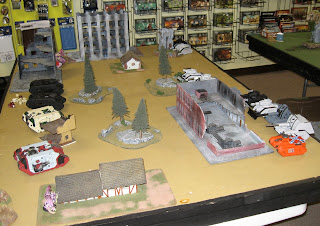 Jason went first and got unlucky and only popped one Land Raider. And lucky for me, it was the one without anyone in it because he penetrated and rolled a 6. No mo Land Raider there. My first turn was alright, I got some stuff not too shoot and got some Termies into assault with one of the Tanks that moved up to shoot.

But some highlights of the game. My Land Raiders Lascannons did nothing for almost the entire game. My non powerfisted Khorne Bezerkers were worthless, especially when one LD died with them in my zone. The terminators pretty much killed most of the tanks, with their chainfist and power fist love action. My Demon Princes did alright, they killed some tanks but all where shot to crap with Heavy Bolters and heavy stubbers. They made all their inv saves when hit by huge stuff, but little bullets killed them. If I wanted to rework the army for the game, I would have taken lash off and added in warptime, but hell I just brought what I made etc. The turn details are kinda meh, once I got to assaulting, it was just a slow smack fest as Jason moved around and tried to shoot me etc. He had a really crappy first turn of shooting, and I am sure the game would have gone in his favor if his guns popped the LD like they should have.

But thoughts on this list. It is fun, and very very fast. Other lists that will spank it, Stealer Rush would hurt it pretty bad. Any list without a ton of Lascannons would have issues with it. Lash can do stupid things with getting Bezerkers in range to do some damage. But Stealer rush would just stomp a mud hole in it. Rending hurts... Against Big bugs, lash pushes the stealers back, shoot the Gunfexes... Hope you don't get rushed and killed. Dakka does nothing.

I am thinking of looking into an Eldar army. I like the Wraithlord model, and the Falcons seem like a good time. Same with Harlies. I likes em. Of course, I am looking at 2 falcons (will have 3 made for well... playing more hard core tournies) with a Wraithlord all ninja'd out. Will see. I have extra cash and I a tempted... I also want a Wii damnit, but I can't find them. So I am super sad like a sad kittie... Oh well.

Enough for now, more games as I play them.
Posted by Thomas aka Goatboy at 6:26 AM