I want to show off my weirdly colored Orks or some other nonsense.  I got a game in this last Thursday with that Typhus/Ork hybrid list.  It went alright and it felt good.  It did get a bit annoying moving all those guys around.  Typhus got punked out pretty bad by rolling a 1 and then a bunch of 2's for his Daemon weapon.  Ass indeed.  Still I think Orks have a lot of power to them and expect players to figure out that two squads of boyz with a Weirdboy for some auto hitting nonsense with his Melta shot is pretty decent.  But it is still an idea.

Right now I need to get 3 more Spawn to test out more lists.  I have a local guy who might have some for trade so will see.  It should be exciting haha.

With that in mind - before the army lists I want to show my paint list for the week.  I got almost all of the last one done last week so this will be another good week.  I will be going to the Texas Ren Faire this Saturday so hopefully I can hit it and quit it during the week as my wife plays Halo 4.

Me
4 more Spawn - If I can get em!
Plastic Dudesmen - Have a script idea from the local group - will see if I can get it to work right
Necron stuff - I need to paint up 2 Night Scythes to complete the asshole bits

Jens
The Last Dragon of the Batch - Not built :(

Chris
Last 1 Cryx guy - Need to build it up etc.

Who knows what else.  I got to do some review stuff so look for another weathered out Forge fiend or a rhino I have laying around.  I still want to play with Mauler fiends as well.  Bastards!

Current list I want to try to have at least built for the weekend/Thursday.

2000 pts.  Woohoo!  It should have enough guns to get the job done.  And enough annoyance to knock people back on their butts as you move around. 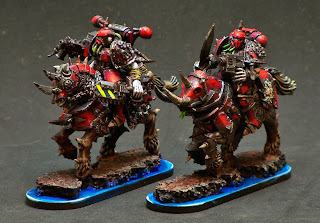 The last 2 of the initial 5 Nurgle bikers

Random DV stuff and some other bits for Luis.  Woohoo!


Posted by Thomas aka Goatboy at 5:39 PM