Goat a game in with the following CSM/Ork Hybrid.  I think it went well and I won the game.  It was a Dual Storm Raven list and one of my poor dragons got toasted.  The other was Vector Locked but it still did some damage as it flew around and breathed fire on things.

A bit scatter brained but it worked fine.  I think I don't need the Big Guns - but my rolling was rather bad with them as I either hit a lot or did nothing at all.  A storm shield guy made a crap ton of saves from Dragon fire.  I ended up winning 3 Objectives to 1 with both Warlords eating it.  Typhus sucked in combat against a Captain who couldn't fail a 3+ until the end when both died in a huge of death.  Bastard with his Power Axe.

I really want to fit in a Biker Unit into that army above.  I really need something to engage the Enemy with and I am thinking of 5 Nurgle Bikers with a Nurgle Chaos Lord with the Black Mace to cause some issues.  The Weirdboy is fun and the Melta shot power is awesome versus flyers.  Zap in your face Assholes!  If I wanted to fit in the bikers I need to drop the Big Guns to get enough points to tweak it.  Maybe drop the lootas instead and keep them as the fat butted grots are pretty sweet.  Blargh!

I also want to test out this type of list to see if it will work.

The idea of the army is to engage turn 2 - cause problems and then hopefully leave the opponent a turn to "figure out" what to do.  It might work - but you will get punched by Turn 2 for sure.

Now onto the paint list and where I am at.


Me
2 Plastic Dudesmen - 1 is done - other is drawn.
1 Blast Master - Done!
1 NSM Aspiring Champ - I have one done already!
Forgefiend/Mauler - If I have enough magnets this bastard will get built for the weekend painting. - Will look for the weekend to do.
5 Nurgle Bikers - 3 are Done! - 2 are started.
Banner build out - started drawing - will start to photoshop it together this weekend.
I want to do a Mortarion card but it is not coming together how I like it - might try another one.

Luis
4 Cultists with Spec Weapons - Done
2 Tactical Guys - Done
1 Random Jump Pack guy - Done
I will start building the Vets as well for some painting this weekend I hope. 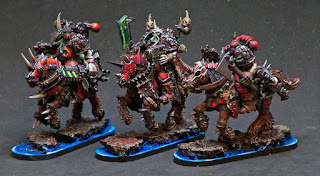 Yup the start of my Nurgle bikers.  I need to get more horse guys damnit.  I think I need to do another 3 as I have parts for 2 at least.  I think anyway. 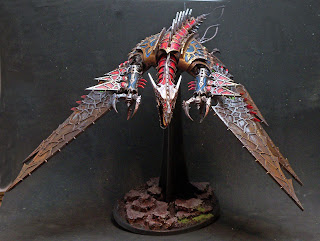 Dragon 1 for Jens.  Woohoo! I have painted 3 of these assholes so far.

Small bit for Luis - need to get those Vets together.  I will look to trying to build some tomorrow.

Posted by Thomas aka Goatboy at 10:36 PM

For your revised list, You have Pauge zombies, yet no typhus to make them so?

Painting is spiffing as allways!

Typhus is in both lists at the top. He is alright - wish I could take a MoN Dark Apostle to do it instead - but you can't have everything haha.

All of those look freaking awesome! I too would love a D Apostle with MoN... seems odd that marks on any HQ won't unlock elites.