My list from last week is almost the same as this week.  I had to work extra to cover some people's vacations so I was kind of down and out paint wise.  This week should be better and I can hopefully throw 2-3 hours per night throwing some paint on models.  Plus I have two drawing things to do as well so I should have a full week.  Woohoo.  Let's break that list out.

Wargames  Con
Start building one part of it.  I swear!

Yeah my week is filled up.  I still want to figure out that stupid lord of Change.  Lots of things to goof around with.  I think I will play a game this  Thursday.

We have a 1500 point event as well coming up - should I just drop one of the DP's and go with some nonsense?  MC Smash!

I want my games to be quick dammit!


Some models - and art will come later on this week. 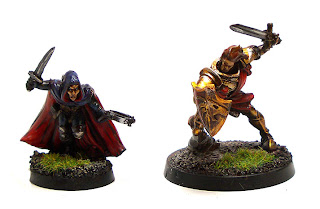 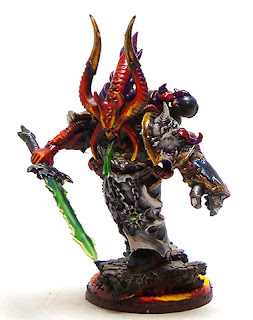 His other leg is a bloodletter so it looks like he is running at you.  You want more pics? 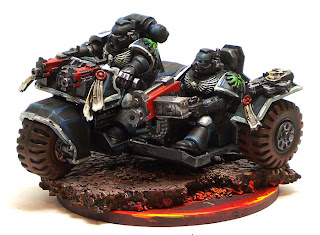 DAKKA - the weapon is magnetized.

Posted by Thomas aka Goatboy at 8:32 PM

All the heralds you have popping out of marines are great, but that is my fav so far.

I used the Zombie Dragon for a LoC.. I know you've already made use of that kit, but it is some seriously good plastic..

Dear Mr goat, this has absolutely nothing to do with this post but I'm writing it anyway, I was wondering if you would just give me feedback on this list I've come up with. It's basically made from the models I've made just cos I think they're cool (especially the techmarines) rather than from a competitive view but still, I don't to have my butt handed
to me. Sorry to pester you dude but I know how you love to uber list build and your opinion would be cool.

So here it is.

techmarine with claw and storm bolter


the idea was to rush the landy with belial, the chaplain and the techies along with the claw guys up the field and rip a new one in the enemy then deep strike the shooty guys on turn 2 within 6" of belial for no scatter and then its shooty shooty time.


so what you think?

First - side shot of Herald coming in a day or two - I painted up some new stuff so I want to update etc. Plus post my Alamo list!

Nurgle and Slaanesh one are in the works - another Tzeentch one is done already :).

Onto the list - it is small which is a problem a lot of the time. I like how Belial looks with claws - but he is much better hammer and board. He kills a ton of stuff.

The Tech Marine is pretty boss as he can shoot lots of nonsense from his set up - and still has a Fist right? With his rig on his back.

What is the Porta Rack on the Chaplain? I would go with missiles over the Assault cannon and heavy flamer. They will give you more bang for you buck most of the time. I would also do just Th/SS on the guys in the LR - you have enough claws with your tech marines etc to do some damage and the hammers will save your butt.

How many points are we looking at?

porta rack gives preferred enemy of whatever kind of unit you kill plus you can use their Tele homers. only 10 points but was considering losing it to add another cyclone. yeah the techies have a fist with their back packs of doom. I've got another 5 termies to build up but just waiting for th & ss to arrive. I went with the claws to get the extra attack and re roll to wound, coupled with the chaps re roll to hit on the charge nastiness.