Goatboy - I be Hatin but I stopped. 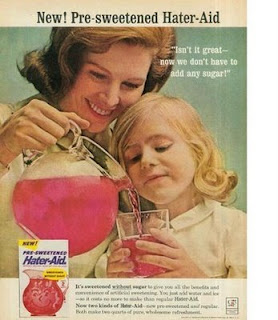 I was going to write a whole thing about stuff I hate right now, but I decided what is the point. I just want to have fun damnit. So that is what I plan on doing. I will have mean lists, but most of the time I plan on playing as much different shit as I can to at least maximize my potential to be a 40k "cool" player. One of those guys that you know will bring the competition but will at least give a game, versus a brutal prison beating.

So lets look at ways to make some of these tournaments fun. Just some thoughts that maybe you try out in your next army list. It makes for some goofy games, but at least you can confuse your opponent more then showing up in a pair of hot pants and glitter on your shirt tits.

1. Highlander lists - Magic the gathering used to have this format called Highlander. They might still have it, but I don't play the game at this time. Anyway, this environment meant that every card, except for basic lands had to be different. So lots and lots of 1 of's and the game was exciting every time you drew a card. You had to create your strategy and change up your game plan game to game as you might not draw the shit awesome card you needed. So for 40k why not try something that lets you have to have each unit either be different or have different wargear enough to get a 20 point difference in overall point cost. I know some armies might not be able to do it (Necrons, Tau) but most should be able to fit into this. Heck you could do 2 could be the same type at troop to help out. This would let you test out weird stuff and create interesting games. I know I enjoyed doing it with my Space Goats so I think people could try.

2. Weird point limits - I know that the Vegas GT will be 1500 points. That is 500 points less then I normally play so this will be an interesting time to try and create something new. I have less to frosting up my army, so it will definitely make me really think what I need at what time. Locally they are starting to have 1250 tournaments for fun and I will hopefully get a chance to try one out in the coming weeks as my work schedule changes. I think this is an interesting idea and something we should all try. When we limit ourselves we create opportunities to break out of our normal game mode.

3. Play with Shit - Play that crappy army. You will notice ways to win with shit units that you might not have tried with your so called awesome units. It lets you discover things that can be fun as well as useful. I know I found the Blood Claw variants to be cool and it is something I think everyone should try out from time to time. Also you could get a chance to buy something new and help keep your store open too. Something people should think about as they run out of stuff for the army and the desire to build a new list is too wallet hurting.

I am sure there are other things people know about so comment away. Also as usual, art is available if people need logos or other designs for their armies. You can check out my work at Full of Monkey. Also here is some other artwork I have done that is less graphic art style and more 40k etc like. 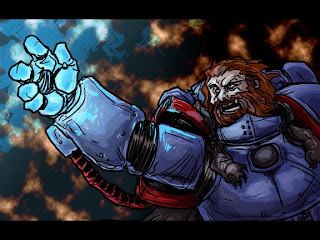 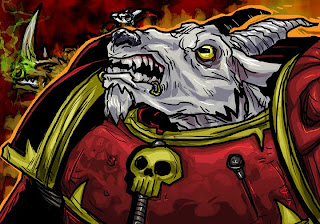 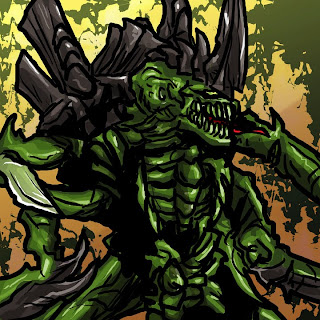 Posted by Thomas aka Goatboy at 9:55 PM

I always show up in hot paints. Hot pants, too. :p

Yo what is up with hte pink koolaid ??

Hateraid can only truly hate in pink.

As do Grenades hahaha - Shit who else are you playing at the Nova? I wish I could go but I don't think I can find the money/time to make it up there. And my anniversary is two weeks after too.

Pink grenades... It's all good bro.

I'll play anybody at NOVA that wants to roll some dice.