So I had to go to work today 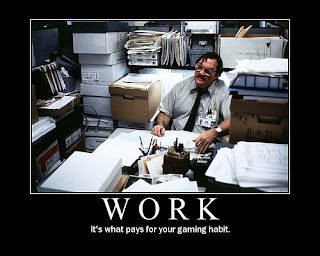 Covering for a coworker + wanted extra cash so the trip to Rochester isn't as bitting on my checkbook as need be. So I get a 6 day work week - woohoo. The 6 days will mean I will get some paint stuff done for sure. Unless something goes crazy at work. Will see.

That is what I want to do - will see if I can get it done and maybe more. Will see. Oh cool pic of something I did 2 weeks ago - Chaos Warhound. No airbrush (don't have one yet) - The customer is going to send me a reaver to do too. Woot. 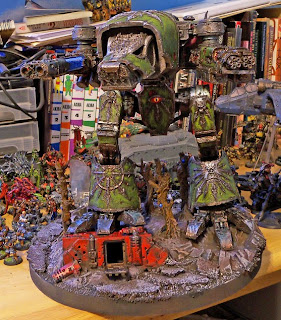 I have some goofy art ideas I will be throwing around in the next week. Some humor towards 40k - will see if they materialize into more fun stuff too. It all depends on how well they work out as I draw them. I did play 3 games this weekend. One versus Dark Angels, Tied versus Footdar, and Tied versus Chaos. I played a SM bike list for the first two and a Chaos Daemon list for the last one. I am on the fence between Daemon Princes and Soul Grinders. If there is just one LR then I can normally ignore it - if there are two it could be an issue and thus the need Grinders.

Bike army was 3 Bike squads, 1 command squad, Captain, Librarian, 2 Iron Clads, 2 Typhoon Speeders, and a 2 Squad of Land Speeder with MM/HF. Not the best list but fun enough. I played for fun with the Footdar as I knew I could just keep over 24 inches away and kill 2 squads and win the KP game. I rolled so bad it was funny. 7 2+ saves I called I would fail 3 and 3 I did fail :). If only I could win by rolling 1's :).

I will post up some list thoughts - and other randomness later on this week. Just wanted to say hello.
Posted by Thomas aka Goatboy at 7:17 AM

Dude, I don't know how you won't be winning Best Painted at the GT.

Ah I paint alright - I am just fast as hell when compared to most other people without an airbrush. I will get one soon enough - but yeah it looks good - just not Golden Daemon etc. I am thinking of working on something for Adepticon etc.

Are you doing the Boyz? I can't remember. The best thing about that Titan is the arms and top part are magnetic :).

I run two Grinders and a winged Nurgle Prince. Both Grinders have tongue and phleghm... They are superstars !

Mine get immobilized all the damned time and then never hit. You would think they would have some practice with that tongue - bastards.

Yeah, I'll be there. It is my local crew, after all.

That is what I thought - woot.

The thing about Grinders is they have a very small profile from a birds eye view so they are pretty much immune to small blast and pie plates... Even a 2" drift will move the hole off the hull. I have found that often and for whatever reason when I am trying out a new unit I've never used before they don't do so well the first few games but if I stick with them then they really start to shine. Grinder is the best walker in the game. They can ID thunderpups in close combat which is really awesome. Sometimes against IG I will just DS them in front of their gunline so my daemons get a good cover save. They are very versatile in many ways !