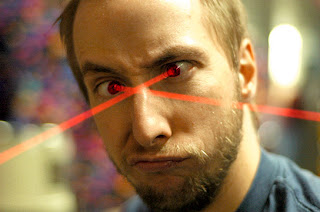 The internet is an interesting place. I post lists up on Bols usually weekly as a way to get some discussion going. It always interests me seeing people's opinions just to see what the rest of Intertubes thinks. Sometimes their opinions are alright and a lot of the time it is rather - well inbred. But hell I am not playing in your pool and what works for you works for you right? So who really cares hehe.

I just find it interesting. This game splits so many people and I do find it annoying at times. We all play the same game, it is just sometimes shaded of flavored differently. But hell if you are reading this then I am pretty sure you like to play some ass kicking armies :).

Here is the Boyz List I submitted and will play as it is all done. Woohoo.

It is tweaked to be an odd list with no Long Fangs, no Rune Priest, and really I don't have to start on the board. It is in response to some of the normal SW builds we see as well as a big test to find out different avenues in the codex that could be lot more interesting to play against and with. Or so that's the hope. I don't have WG with the Grey Hunters as I like two special weapons in each squad that are not just based on combi weapons. Plus it would add more points and give you less stuff. The squads that need it get them as extra "wounds" or increases in effectiveness.

Will be hopefully getting some games with this on Saturday. Will see. I also got this cool magnetic board that is a solid flat red. I plan on doing some Chaos Stars on it to get it all Goat like and have the perfect holder tray. It even fits in my Sabol bag with all my dice and other nonsense so I am ready to go. 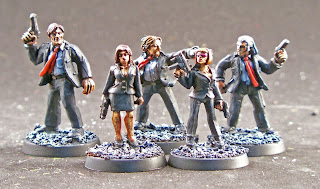 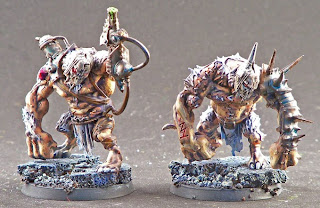 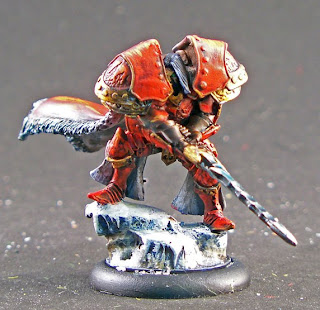 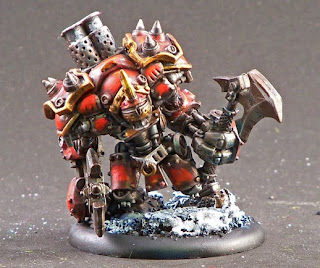 Finally some more Grotesques and other random bits and pieces :). I did get a new order for a World Eaters army - blue/white - so look for those coming in a couple weeks. Beyond that some more random bits.

Woohoo - might finish a FW Inquisitor and 2 RPG Figures. Will see. But all in all a good week. Will write up my next week starting on Sunday on Monday and see if I can get a lot finished :). Or so that is the plan. I also need to write my BOLS article too. Fun times.
Posted by Thomas aka Goatboy at 1:37 PM

Hey Goatboy, was wondering if I could email you a SW list I was working on. Get your thoughts on it. Shoot me an email @ Crimzzen@gmail.com with a way I can contact you. Thanks!

I will be more then happy to look at it.

That list looks hawt. I like you dropping the long fangs and going for more mobility overall.

Love those Wrack models. What game do them come from?

New Rat Ogres with weird beastman thingies for the heads.

Here are my tactical comments on changes to the army:

Looks like you are going for a completely mobile army. I think this kind of thinking is how we should all be thinking. Dark eldar are highly mobile so counter speed with speed.

No big loss dropping Wolfguard from your GH squads. The main advantage if the extra leadership point & power fist attack. Grey Hunters are one of the best troop choices. I like the Wolf standard and MotW.

The issue is I just need more guys, thus those things getting dropped first.