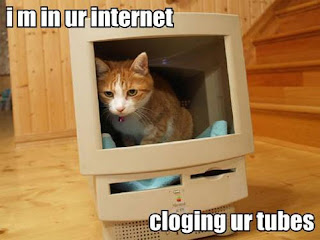 Every once in awhile I get a loverly link to someone giving me shit. It makes me laugh, as most of the time it is people just getting all tough guy online. A lot of the time it just makes me wonder what anyone would ever say to me if I came around to their sand pit. It is just interesting as really - I strive to not give anyone any shit - nor do I come out as a mean jerk or a douche bag. It isn't in my nature as shit this game is about fun and I want it to stay that way for me. Yeah I like to play mean shit - but really if you want to excel in something you will eventually play as best as you can to excel.

Sorry for that - it just gets somewhat annoying when it seems it is just cool to hate right? Oh well - I guess I need to start an internet fight at some point. I think I could yell at Brent at Strictly Average or maybe Jawa. I could draw some terrible pictures as a new way to push the internet fight into some kind of crazy. Or do a cool youtube video talking about how I will make your head look like a slurpee or some nonsense. Or maybe not and just continue going to tournaments and winning best sportsman :). Heh.

I know the last two aren't paint things - but fuck it, it is my blog damnit.

Final list - 1850 - Fluffy, fun, and kinda ok to play with. Will see - it is either that or the SW. Both look neat but the SW is so all over the place it might be a lot more fun to play and try to out play my opponents.

This past weekend I played a 40k tournament at the local store Dragon's Lair. It was a 2000 pt tournament and I threw down with Daemons. I think I might have the "best" list for myself to play. And it is especially designed to eat Marines too, and with the current environment that is a good thing.

The right squad came in - Crushers + 2 Heralds, 1 Tzeentch Herald, 1 Non tongue grinder, 2 Fiends. This came down to getting in there and just chewing up some marines. Mark made some mistakes with target priority that hurt him by leaving his Assault squad stranded after shooting down some fiends. I was able to get there and get to business. Lysander did punk out some Grinders and was a complete bad ass. I left him with an immobilized LR and some Terminators. MVP's of this match - Fiends did their business well and the two Tzeentch heralds breathed on a lot of guys.

Jay had some bad luck and didn't feel up to finishing the game. I was ahead as my fiends were being jerks hitting and running around the board. Abbadon was left as well as the LR. I was coming to get it soon but that was life on the game. I won with the objectives.

Woohoo Daemon fight. Both of use didn't get the right squad in and so it was me fleeting Grinders into Daemonettes to stick them. As well as getting some luck keeping his units at bay. We got tied on Objectives as we both had one troop unit left and ended up tied at the end of the game. Highlight was charging in with a squad of fiends and Seekers into the Keeper. I killed her as she is fragile when dealing with lots of attacks :). She does great versus Marines where she can hit around and rub her multiboobs all over the field.

I ended up winning the event in the end and had a good time. So all in all I like my Daemons. I just feel that they are not a good - have fun and play army. They are either way too good versus a mediocre army - or just over matched in firepower. It isn't a middle tier army - it is a tier defining army. It is why sometimes that Daemon player will just win everything that come at them. And other times they just roll over. Hell it is the one army that is all about those damned 6's :). Or 5's...

Finally an old Chaos Lord I found and redid. Woohoo - this Bile army is coming on strong to go to Rochester. 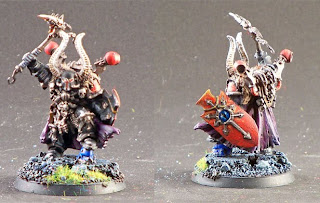 Posted by Thomas aka Goatboy at 6:35 PM

How do you find the time that much, so fast?

I'd say I'm jealous, but it's obvious.

It is my obvious worship of the Goat Gods.

What do you mean I didn't finish the game! The game was over :) After the prince died, the outcome was known. You were only supposed to get a minor there Tommy! Geez, I gotta watch you ALL the time!