I took a half day off today to get some games at the store. I had a random 4 hours left on personal due to changes in my work schedule (10 hour days to 8 hour days) so I decided to get some games in. Having your work schedule change up and screw up your normal game days really drives me bonkers. I think guys in general, need some form of competition or camaraderie to get on - no matter the athletic/mental/etc skills of the guy. Taking that way frustrates you and right now I am kinda frustrated in the lack of wargaming time I get. I play on weekends, but a lot of the time it isn't as much of a game mind set, more of a hang out mindset. Either way - Goatboy is not in his special cave of gaming :).

But enough of that and my casual gamer life right now - I finished up the possessed squad for Fritz. I forgot one guy and I went ahead and painted him before I came into work this afternoon. So imagine the picture with one more dude. It does make me want to play Mordehium (too lazy to look up proper spelling). 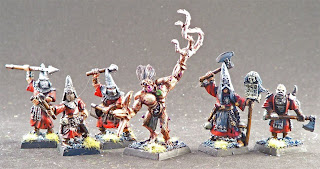 Tweaked my Space Goats list for the Boyz GT - Will submit it soon for grading and see if I can pass the test of casual awesome.

1845 right on the nose. I went ahead and added a Wolf Guard Battle Leader to join the Wolf Scouts and cause some shenanigans. Will it be good? Hope so heh - it is a weird mix of stuff and I think it will work alright. I just have to not miss with my melta :).

So will see - I will play it tonight - and as I play it if I like this I will submit in a week or so and just say - bring it sucka mc's!!!
Posted by Thomas aka Goatboy at 1:26 PM

So how come a bike instead of a TW mount on the Wolf Lord? Is it because of tight points or for another reason?

I was thinking of building the next Space Wolves all-around list,at 1750 points, and I'd like your opinion.

This sums up to 1745 points. Basically it was mostly inspired by lists that you and Stelek have posted with some tweaks.
Do you think it can work or else what would you change. I have a low budget and I don't have the chance to buy a lot of things now and changing them later.

BIkes due to a comp system and to do something different. It is a weird list and some that you would normally never see. So I wanted to play it :). Plus I can't put Wolf Priest on a Thunder Wolf. If I could it would make for a seriously nutty game :).

That lists looks good - you almost don't need the WGBL as the lord can put out a lot of hurt. But at 1750 not a lot can deal with the assault you will put out with the two guys running up to do some punching. I did well with a 3 lord list too - so I am sure this will do pretty well most of the time.

If the tables have a lot of cover you are going to have fun as you get up and get to assault without worrying about payback heh.

Thanks for the answer Thomas. I'm especially concerned about the scouts. Should I drop one squad and some extra bits here and there and take instead 2 WG with PF or not?

A lot of the time you could just go with one - get a WG with a combi melta to join them just so you have two melta chances as you pop out. CM/Fist would work and you could assault in. That might be a better option for you to have overall.

Where is the Rune Priest riding? you might need to change up one of the grey hunter squads to a 9 man squad with a flamer and attach him there so he can ride around and get his 24" no closer to make sure your Riders don't get boned by random psychic powers.

Yes, you're right about the RP and GH. They should be 9. Still don't know about 2nd scouts and WG though.

Great game last nite bro. I am really liking the bikes. They are a good substitute for Thunderwolves and should score well on comp. The WGBL running with the scouts is the stuff of Valhalla I'm telling ya.