Goatboy - 40k and other stuff! 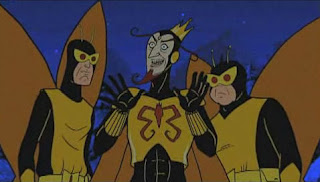 Another day painting. I had a crazy weekend. I got some educational commission work done, finished the Chaos Reaver Titan, got my weekly miniature painting sprayed (most of it), and did some art work for another client. Fun fun fun. Basically I woke up, started working and tried not to get too bogged down. The life of a freelancer can be annoying - especially when you have a day job to make things fit bill wise :).

Looks like peeps are mad at me again online. I think it comes from me writing a lot and being a "face" most of the time. Everyone who has met me has not said anything terrible about me. Well not to my face hah. Still it is kinda funny - especially to those who chat with me online. The hated Goatboy. I should just change my name to Hateboy. If I did that Mr. Black would have to stop hating me though. He has that unnatural fear of Goat like animals.

So to get things started - current paint this week.

Michael S.
Ork Bomba thingie - was going to be this weekend but art and Reaver took up the time

Jay/Me
3 Heralds of Tzeentch - I want one more and need to make 2 for Jay - he doesn't have time to paint right now so it is usually put off with the Grinder
Soul Grinder - Above :(

I still have some more educational art commission work and another piece I need to try and get knocked out. So again this will be a busy week. This month is going to be crappy as my weekends are filled with going to friend's weddings. Why does March have to be pretty in Texas?

I can take down 3 light things with the set up of Long Fangs. I got a lot of troops and other bits and pieces. It has different HQ characters too - given the idea of the Captain, Chaplin, and Squad Leader type of guy. It has a Wolf Claw dude riding a horse - which is funny as hell looking haha. So I think it will work and be it. I need to find one more Heavy Bolter dude and I will be done!

I played two games with the Storm Ravens. I lost to Big Red on a turn 5 Fritz win :). And I won versus JWolf when I made almost all the 4+ cover save hits on the Storm Ravens and then watched as my stuff got mixed in and killed stuff. I think everything I shot I killed or hurt - with a gun that JWolf shot scatter on himself and blow up his own tank. It was just one of those games for him.

I think Marines would benefit the most from the Storm Raven if they got it. Wolves would have some issues as it would be a heavy and take up Long Fang spots for a rather expensive vehicle. If they could fit Thunder Wolves in there it would be an auto in - but thankfully it most likely can't so we won't have to worry about that BS. It would be fun to get Bjorn into the zone more though. Of course he wouldn't attach via the Anus like normal dreads. It would be crotch all the time haha.

Alright - enough of that here are some painted things. The Reaver will get better pics later this week and then it is shipped off to Canada. 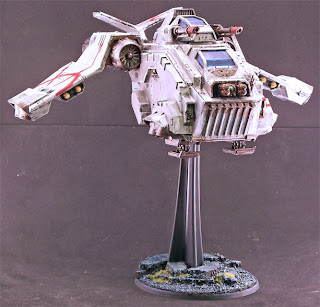 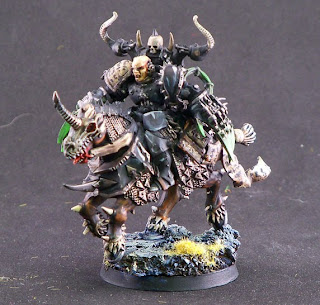 Posted by Thomas aka Goatboy at 1:54 PM

yeah, many people do seem to hate you. it is wrong of them to disliek you when they don't even know you.

keep up the good work, and I like the storm raven, it's extra sexy.

forgot to mention, I love all of the random V- brother pics. that show makes my day.

Thanks - I love the cartoon haha. That Season finale was amazing. What is a Rusty Venture? hahaha.

It's the season of internet hate. I'm so heartbroken.....Do you have any donuts?

Haha I know. Oh well. I tried to comment to stuff that was actually ok - might be hate but it isn't just nutbar hate.

I'm digging the pale Stormraven and your mad Wolf Lord - he certainly looks like one mean bastard - why no Saga of the Bear for him ?

With Claws there is no point - if he eats it he eats it. It doesn't fit "fluff" wise for the Word Bearers *cough* I mean Grammar Wolves :).

With two claws, how does he steer the bike/horse? :)

I really like claws on my Wolves, I think they are underutilized.

I don't know why people have to hate. When I was about two years old, a goat on my uncles farm ate my arm up to the elbow. I guess ate is a strong word... my arm was completely unharmed except for a liberal coating of goat spit. Well, to be fair, I was feeding it and pretty much stuffed my arm down it's throat. Still, I don't hate goats. If I can survive that, I can easily make it through your blogs without hating you.