Goatboy - it is Sunday 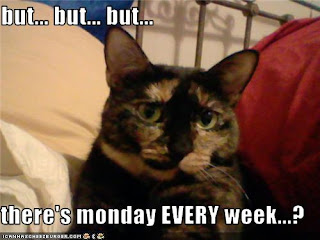 Just posting some project stuff. I updated some of the client section on Full of Monkey. I will be messing with more as usual. But that is for later times this week. As usual I started on Friday as that is my normal update day for Full of Monkey. So onto the paint list.

Chris C - White Dark Eldar you have been seeing.
Raider #2 - Already done
Raider #3 - Already done - did both of these late Friday night as my brain was just ready to paint.
Raider #4 - Just need to get it from Chris
There are 2 Ravagers too - so will see if I do them next week.

Jason S - Ice Nids
20 Hormagaunts - Did these bastards today - this order is complete!!

Fritz - Mordhiem
8 Guys - Got to finish the last of this and this project is done. Woohoo!!

Art stuff - Some drawings for a Western Game - woohoo - gonna do lots of coloring on Wednesday.

Personal stuff
Test mini for new army thought - woohoo I think I got it in my head - just have to see if it looks good. A++ paint is my thought - might be my Adepticon/Geek Nation tour army. Will get a pick of it later on this week I am sure.

Once I show the model I will explain the list thought - I think it might be pretty decent as well as like good. That is my hope and plan right haha. I also want to draw some 40k stuff too.

Wife's bday is this Thursday and I might be kinda out of painting time - so will see. Fun times indeed. There is a tournament this Saturday too - so I might go play that. Not sure what I will play - probably a Space Wolf build but something neater. Not sure. No Thunder Wolves. Probably bikes. Probably this :).

Or should I play this one - which lets me play with Toys I never get to take out.

3 Tanks and Arjac - just full of hate and ready to do some punching. It sounds fun and quick and just ready get done with quickly hehe. Which might be right for the tournament as it is starting late after New Year's Eve. It won't win but I can drive tanks all over the board damnit.
Posted by Thomas aka Goatboy at 7:34 PM

Hey Goatboy, I am making a similarly themed World Eaters/Wolves army and was looking for some images of your Juggernauts/Wolf Lords on TW. Can you point me to any or email me?

I've made some "bikers" and they should pop up on BOLS sometime soon as I discuss making the army.

What kind of theme are you looking for? The basic plastic jugger is pretty cool and some dremel work on the khorne symbols would still make for a cool looking beast.