These are lists that I currently want to build and play. Some of them are add ons to current armies and others are completely new - waiting on me to get minis etc and finish this off. Usually meaning I have to finish off someone else's army and then I can get onto mine for a least one paint day during the week. Mix this in with some art desires and I got a full week of Goat design. I also get to start on the reaver next week most likely :).

So without any further thoughts - some mental lists I will end up building at some point.

1850 - Doesn't start on the board and is coming for your throat. Vanguards hopefully come down - get Long Fangs or Hydras, or whatever. Heroic Assault should work 5 out of 6 games and hell it is fun. My troops are Meh - but really the BA troops are kinda meh when you compare them to the jack ass cousins of the Space Wolves.

1845 - So I am playing more orks and I really wish I had rokkits over lootas so much of the time. I know the one random Land Raider could ruin my day, but you just have to plan carefully and make sure that you have something in range or in target etc. The burnas are there because it is fun to say, I hit 5 with a template multiplied by 10 :). Let see some 1's and 2's. Also charging into some Termies with the Power Weapons on can do some serious damage too. Either way it should be an alright list that lets me play with some goofy crap as usual.

Simple - hopefully easy. The army starts off the table most likely - if not it becomes a big bullet. Termagaunts in front of Hive Guard in front of Tyrannofex - with Tervigons in the back casting Catalyst as need by. Genestealers outflank and I try to cause as much problems as I can. If you see lots of Jaws, drop one of the Hive Guard for Death Leaper. Either way - this list will take an hour and a half to play. More time for hanging out during an event.

Dark Eldar Thought build - there is another tweak but it depends on how making a Talos goes.

So all foot - portal list. I just don't feel like running raiders and I want things to basically say - oh you brought a lot of ML - sorry I got cover dawg. The only thing starting on the board are the two fat warrior squads with Haemonculi - who walk up 6, drop off a portal and call it a day. I found a neat thing to try and make another portal out of so look for a picture at some point.

Other changes could be to go with Talos versus the Beastmaster unit. The beast Master unit is a test thought but it might be a great - come out touch you as everything else moves around and gets into position to do something annoying. There is a lot of lance fire to pop vehicles as well as other options.

So not too bad - will see if I get it done after I finish Chris's Dark Eldar. Woohoo. 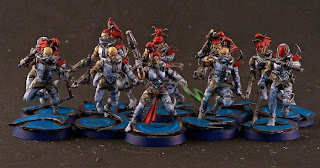 Posted by Thomas aka Goatboy at 7:35 AM

Thanks when are we gonna see the priest?