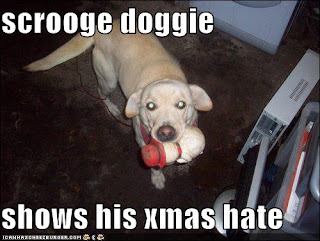 So Christmas is almost upon on and I sit up in my room typing this out. I am waiting for the Raider for a client I am working on to dry and I am about to do some building before I think about crashing out. Driving to In-Laws tomorrow with my wife, bro-in-law and sister-in-law. I think I need to add more dashes somewhere too haha. So what the hell is this blog post about? Welp I think I know need to play different stuff. Basically have my lists with odd pieces that somehow work.

I played a game versus John the Crazy Red Praetorian himself. He played Space Wolves too and I had a very optimized and mean list. Very little fat in it. I lost the game on a Redeemer spookin my Grey hunters off an objective. It was a fun game and a lot of stuff went badly for me as is the norm when I am goofing around. The odds in Goatboy's favor? Hell no - but that makes it more fun :). To give you an idea - I hit the LRR with 10 str 10 auto hitting punches. 3 glances and one pen. I blew off one Redeemer cannon and made the LRR very tired. But hell you got to have those games too - because if you always had awesome games - you would be living some kind of movie life haha.

Anyway so this got me to think I need to tweak out my Space Goats - and use the Bikes as I just had more fun with them. This got me thinking of different ways to build the list - getting more guys - more tricks and just overall more interesting bits. It has pieces from all the armies I like and I think it might be ok. And yes I am using Assault Cannons. I like em so you can suck it. There are times where they will just work awesome. And other times they never rend. Rolling more dice is always fun for me haha.

So I got a lot of movement - Missiles that can move and fire and some good long range stuff. Plus I got some plasma which can throw out 7 shots in range if need be - which should be good to take out a big MC or something that might come to close. It also has some good elements in it. I didn't try the Mark of the Hunter combo - because I don't know if I need too. It is something to think about as I can obviously drop out one Grey Hunter squad and fit some nonsense in there. Either way - this is the list I am going to be tweaking I think.

I am also looking at building a Horus Heresy army. I am thinking Word Bearers as I am reading the books and the idea of scroll work and some other cool bits sound neat. Will see. But that is my thoughts right now.

I hope everyone's Xmas is good - and everyone has a safe trip tomorrow.

Some painted stuff - the chariot I didn't make. 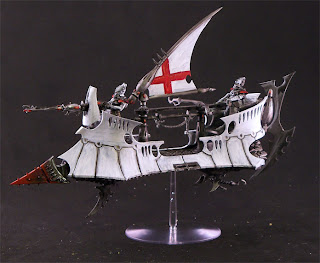 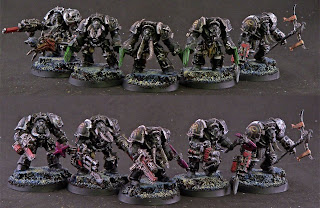 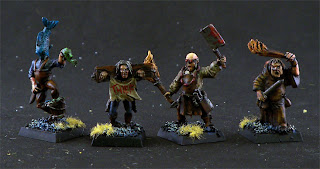 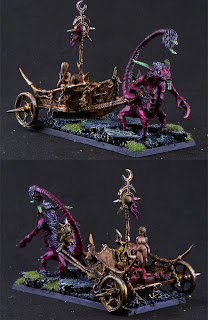 Posted by Thomas aka Goatboy at 5:46 PM

I love the Chaos Termies.

Hey man, don't go blaming me for for your even nastier and cheatier army. I'm just a casual player.

That was a FUN game, too much craziness. Have a Merry Christmas and a Happy HO-HO!

Merry Xmas to ALL you various Texans with whom I have interacted. :)

And a Merry Christmas and Happy New Year to you and yours TKE.